The history of Morocco counts four capital cities: Fez, Marrakesh, Rabat and Meknes. The latter one functioned as the imperial capital only for a short time, between 1673 and 1727, but it was the period of being Morocco's "Versailles". Nowadays it is a UNESCO World Heritage Site and this AirPano virtual tour is focused on this unique place. 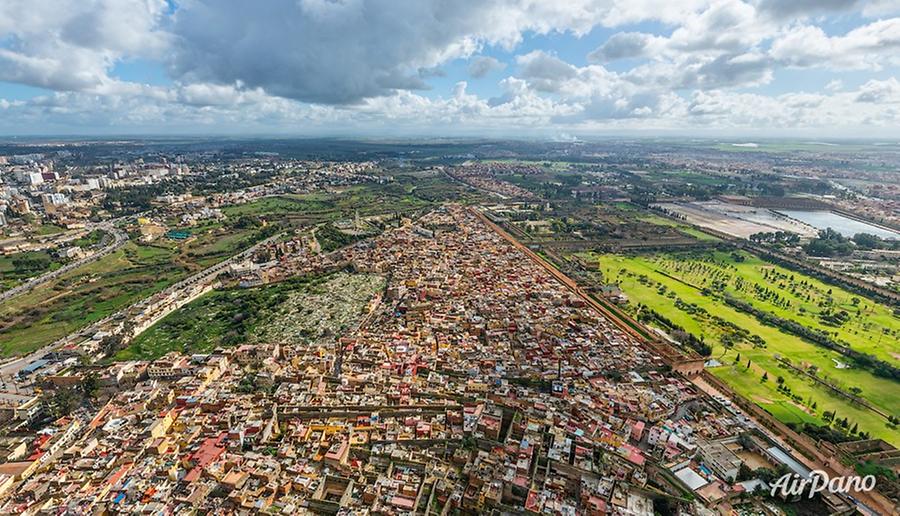 The first settlement was founded here in the 8th century under the name Kasbah, "the fortress". Two centuries later, the town was captured by the Berber tribe of Miknasa which gave the place its name. In the 11th century, the Almoravid dynasty turned Meknes into a military settlement. It became the capital of Morocco under the reign of the Alaouite dynasty. One of its sultan, Moulay Ismail Ibn Sharif, turned Meknes into an impressive city with gorgeous buildings, thus making Meknes a genuine architectural wonder.

Like many other ancient cities of Morocco, Meknes is divided into Médina, the historic centre, and a modern part of the city. Wishing to protect the city from the Berbers, Moulay Ismail Ibn Sharif ordered to surround Médina with a wall of 10 km in length. The gate erected in this wall, Bab al-Mansour, is considered the most beautiful gate in Morocco. 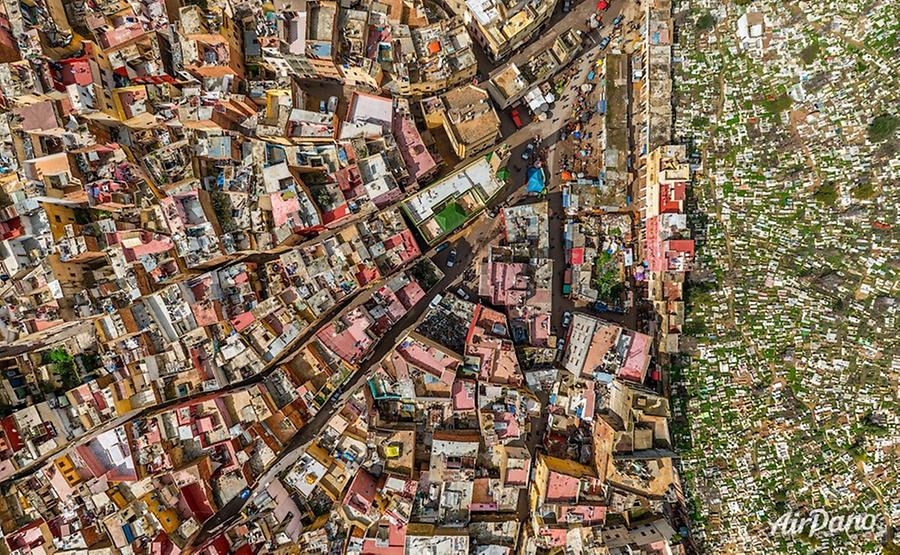 El Hedim Square is the heart of Médina. In the days of the legendary sultan, it was used as the site for the announcement of Amiri decrees and public executions. Now it is a popular recreational place for citizens and tourists. 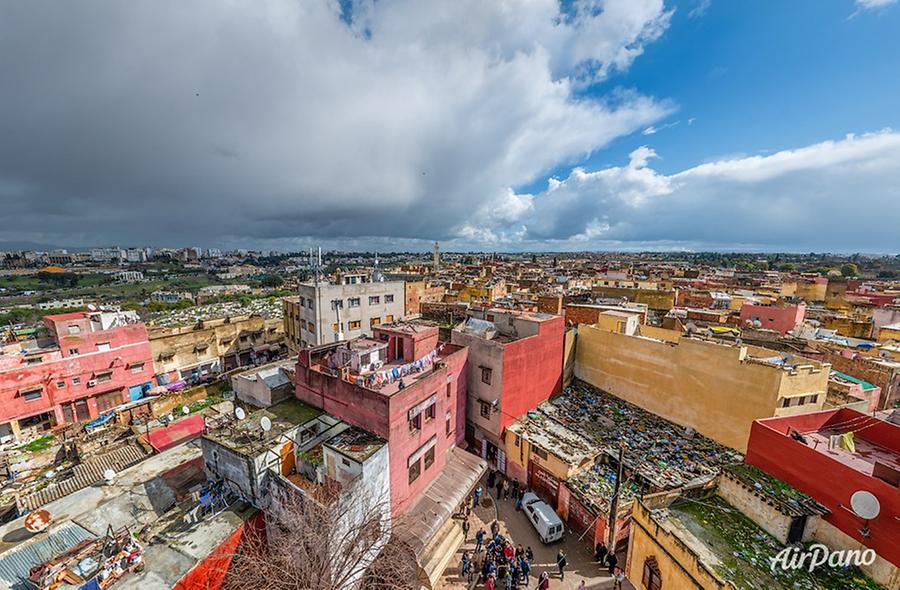 Another square of the historical part of the city is Place Lalla Aouda that is famous for its large royal mosque: here is the mausoleum of Moulay Ismail Ibn Sharif. The ruler initially planned to build it while he was still alive and invited the best craftsmen to make it. That's how this building became not only a tomb but a remarkable example of Islamic architecture and design. The courtyard is decorated with mosaics, carvings and fountains; the floor is covered by sumptuous carpets and at the back of the hall you can find the genealogical tree of the Alaouite dynasty. The mausoleum is a rare sacred place in Morocco that is open for all people regardless of their religion. 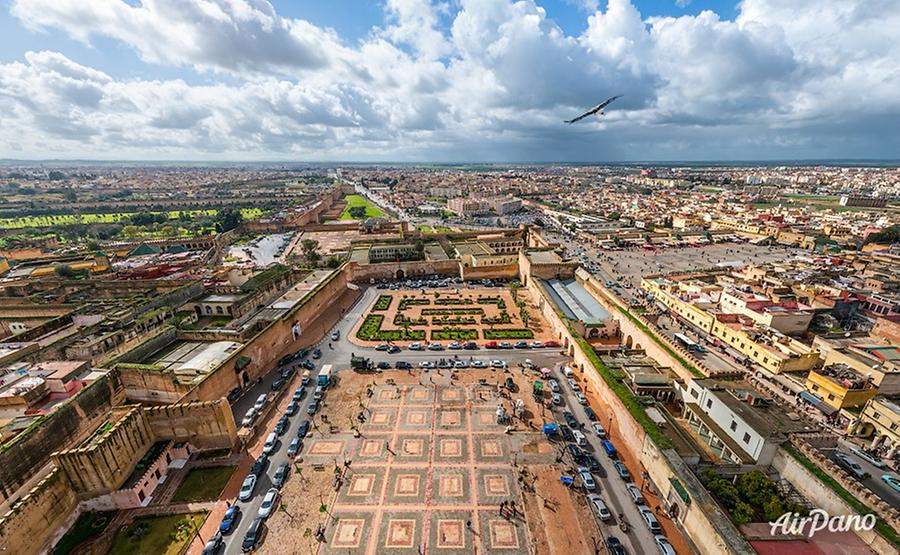 Close to Lalla Aouda and mausoleum, there is another extraordinary building complex, Koubat Al Khayatin: a pavilion in which sultan Moulay Ismail received foreign ambassadors. Just below it, there is the subterranean prison Qara from which, as rumour has it, no one had ever returned. These structures, like many other buildings in Meknes, were intended to demonstrate majesty and glory of Morocco. 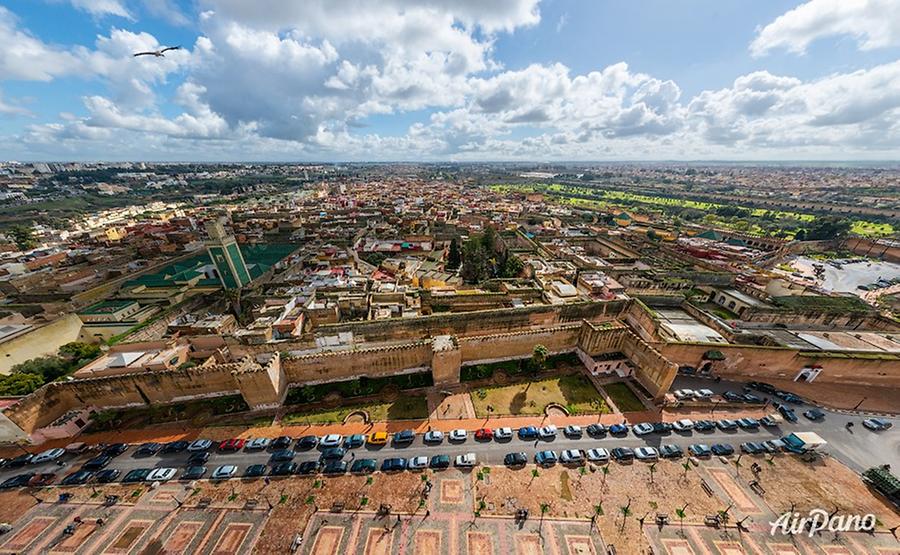 At the southern border of Médina, we find the majestic complex of Heri es-Souani. Granaries, stables and a water pond cover a total area of 1.4 hectares. Comparing to other historical buildings of Médina, this complex does not feature ornamental details as the initial goal was to create a reliable and safe place; and the architectures did so. The building being 180 meters long and 70 meters wide could hold a five-year stock of grain for an army. And thanks to the walls being 4 meters thick, the temperature never rose higher than 18°C even in the hottest days. 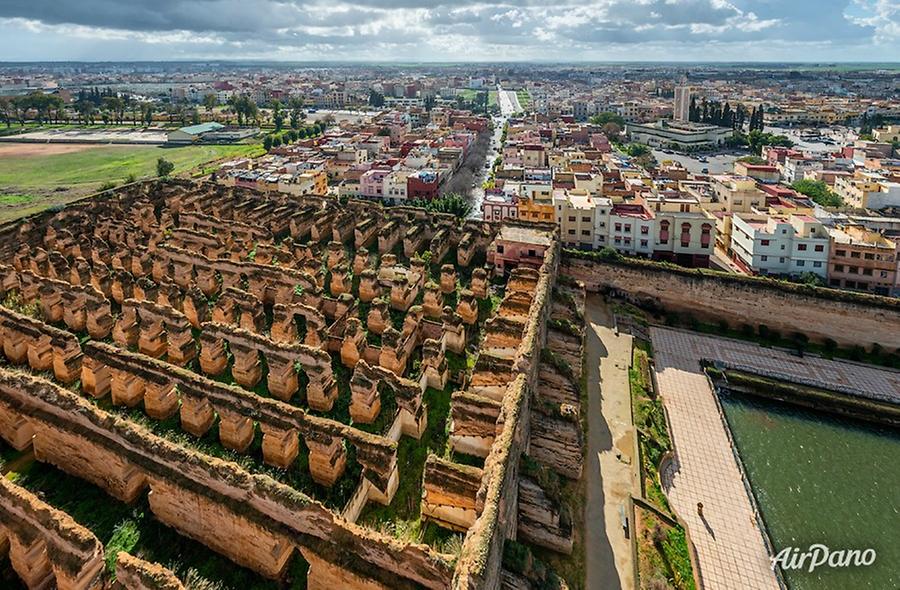 Stables to around 12,000 horses and camels were built at the back of this complex. Nowadays it looks like a "forest" of pillars and arches: the roof was gradually destroyed by the time or earthquakes. And finally, the water reservoir with dimensions of 300 ? 140 meters and 3 meters of depth not only supplied the city with water but was also a recreational spot for well-off people and a training pool for warriors. These and many other pieces of evidence of the past were united by UNESCO into one site as the Historic City of Meknes.

Once in Morocco, we couldn't miss the opportunity to visit some natural areas, and in Africa, it is the desert. In the south-east of the country, there is Erg Chebbi, one of the two largest ergs in Sahara.

Erg is the Arabic word for huge dune fields in northern Africa. It is the area of dunes and barchans with little or no vegetative cover. Erg Chebbi spans an area of 22 kilometres from north to south and 5 kilometres from east to west. It has found itself amidst a flat rocky desert with its sand constantly moving. Smaller dunes migrate along the flanks of the larger dunes and sand ridges, some of them are getting 150 meters tall! Colourful accumulations of bright orange sand are extremely beautiful.

Get acquainted with Morocco, its ancient history and silent song of the desert.