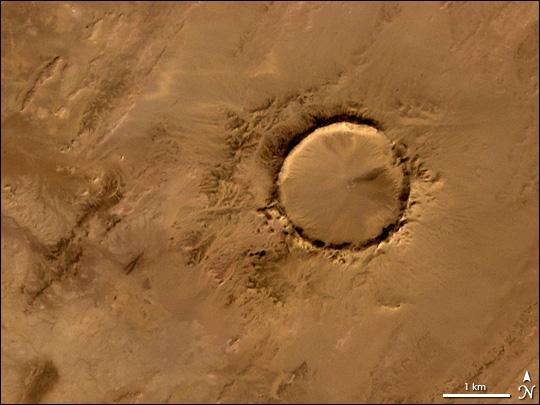 Photo courtesy of NASA., under PD
Deep in the Sahara lies a crater, a nearly a perfect circle that is 1.9 km (1.2 mi) wide, and sports a rim 100 m (330 ft) high. The Tenoumer crater Tenoumer crater, Fderik, Tiris Zemmour, Mauretanien sits in a vast plain of rocks so ancient they were deposited hundreds of millions of years before the first dinosaurs walked the Earth.

Close examination of the structure has revealed that the craters hardened "lava" was actually rock that had melted from a meteorite impact. On this satellite image the craters outline is unmistakable, yet it does not necessarily look like a crater; the light and shadows make it look more as if someone pressed a giant cookie cutter into the rock.

In this image, the sunlight shines from the southeast (lower right), and the bright arc along the northwestern part of the crater is where the crater walls slope up to the rim. Around the perimeter, the relatively steep walls cast dark shadows.

Although it resides in ancient rock, Tenoumer is geologically young, ranging in age between roughly 10,000 and 30,000 years old.