I have always imagined Africa as an insanely hot place. Every time someone would mention this continent, all I could think about was the heat, wind-borne sand, and lack of water. But I was in for a big surprise when my group, including Sergey Semenov and our guides, went to Lake Nakuru in search of seasonal gatherings of flamingos. Areas that we saw along the road reminded me of Tula region of Russia: green fields stretching to the horizon and familiar looking potatoes fields! The only difference was — less asphalt on the roads, and locals that looked a little bit different. 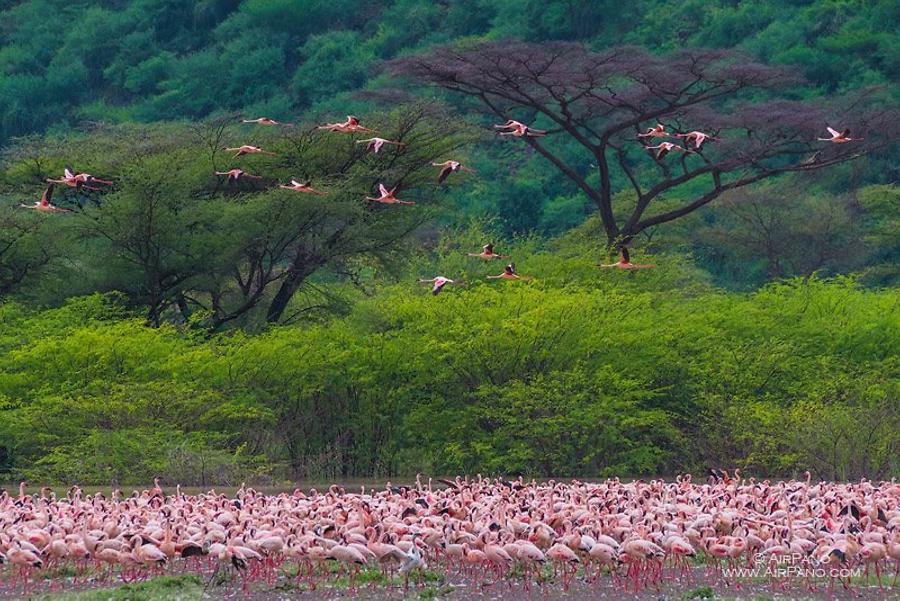 I must say that we came to Kenya during dry season. I don't know if it was our bad luck or the weather went wrong, but it rained very hard every day. Sometimes it drizzled a little, and sometimes it was a downpour. All local water bodies and lakes were overflowing. That caused a lot of trouble for people living near Lake Nakuru, because crocodiles practically swam freely through the streets of local villages.

High water forced flamingos to leave Lake Nakuru and move to Lake Bogoria. This is where we spent two days taking pictures.

Lake Bogoria is a national park with its own security and rules. On our first day we met a stern-looking park ranger at the Lake Bogoria entrance. He examined our helicopter and said that he wouldn't allow us to fly it close to the birds, unless he saw it in action. "Two radio-controlled helicopters are already lying on the bottom of this lake, and yours will be the third one!" that's what he kindly told us before the first flight.

However, the look on his face changed after the launch. "I see how you're flying it. You can do what you came here for!" he said and left. And so we got to work.

There were almost no tourists watching flamingos in the morning. Only one car with professional photographers from Italy stood next to us.

We made first several flights. I must say that it is not that easy to scary a flamingo. If you don't make sudden movements or run, and quietly take pictures from the roof of your car, chances are that a flock of pink birds will soon surround you, and you will have an opportunity to take very interesting pictures. Birds don't come too close and keep their distance, but the distance is very small. 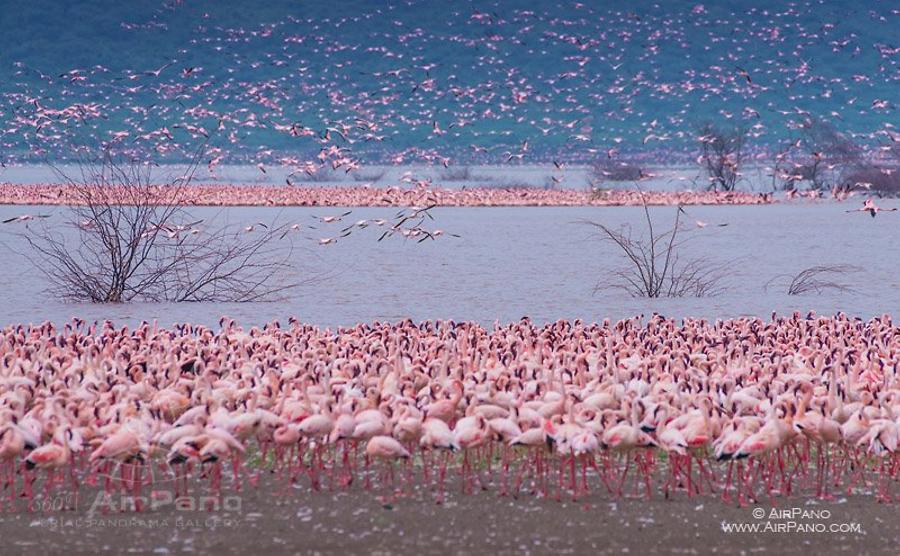 At first we proceeded very carefully. However, after a couple of flights we realized that the birds weren't afraid of our helicopter, and we could photograph from a very close range.

Italians and our guides warned us that we should hurry up and finish everything by noon.

"The Chinese will come in the afternoon".

"You'll see once they are here". 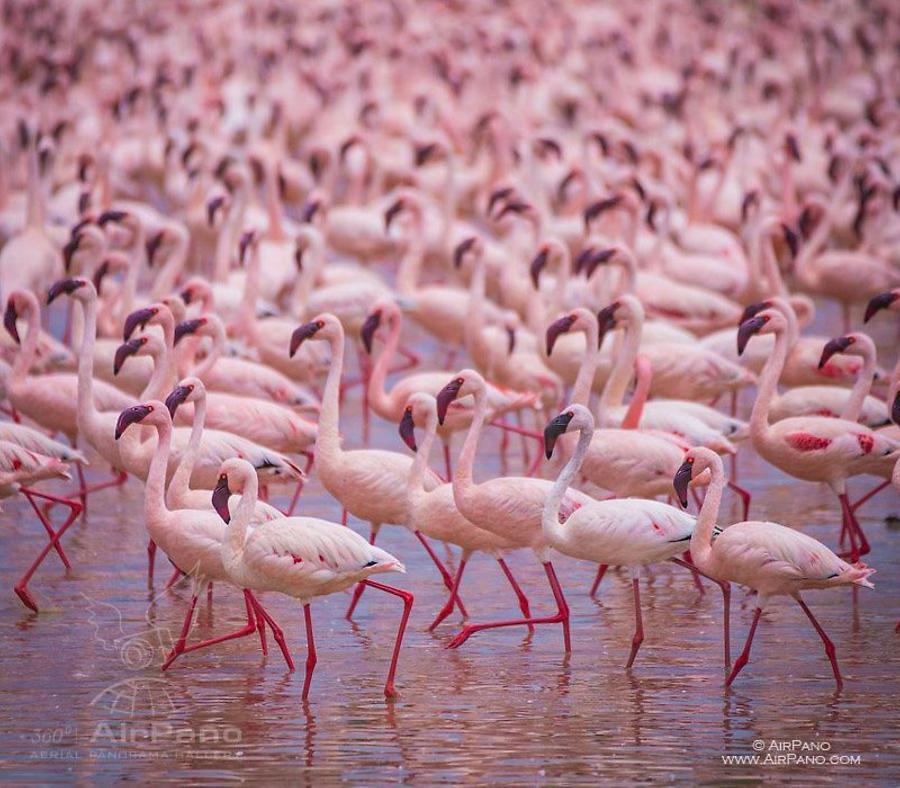 And yes, we were not happy with what we saw in the afternoon. Several buses with tourists from China showed up around 12 o'clock. 15 minutes later there were no flamingos around us. What happened?

As I mentioned before the birds are calm as long as you don't make sudden movements and watch them from one spot. Flocks of flamingos are constantly moving in the lakefront, going in and out of the water. Our cars were pretty far away from the coastline, which allowed us to observe the birds and take pictures without disturbing them. Even our radio-controlled helicopter didn't bother flamingos.

When tourists came out of their buses, they dispersed along the shoreline trying to photograph with the birds. Frightened flamingos flew away and a few minutes later all birds in the area were gone. Our guides told us that it was common in case of visitors from China.

However, when few most enthusiastic Chinese tourists began throwing stones at the remaining birds so they could be photographed with soaring flamingos on a background, our guides had to intervene. Unfortunately, simple warning had no effect, so Evans, our guide, told them that he would call the park rangers and they would have to deal with the local police about their behavior in a national park. Only then did the chaos stop.

After the Chinese tourists left we waited for a few hours, but with no result. Flamingos that escaped to the center of the lake never came back that day.

The next morning we continued taking pictures at Lake Bogoria, and in the evening we went to Nairobi, the capital of Kenya. Here you can see our virtual tour with flamingos.

Here are some facts about flamingo at Lake Bogoria.

There are over 40 national parks and reserves with diverse African flora and fauna in Kenya. The most famous of them is the Lake Nakuru National Park. 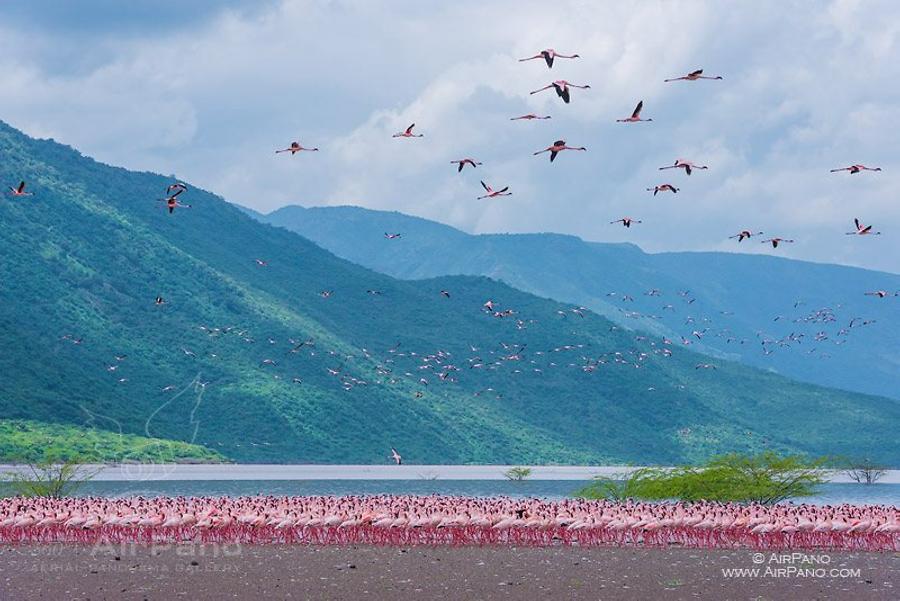 It surrounds Lake Nakuru, which has an area of 188 square kilometers and depth of less than 3 meters. The park's meadows and forest thickets are swarming with over 50 species of mammals, including white and black rhinos. However main attraction of the Lake Nakuru National Park is 450 species of birds. In fact, the only purpose of establishing the nature preserve in 1960 was to protect these birds.

The park became worldwide famous because of flamingos. These long-legged birds with thin flexible neck have a unique color, which depends directly on their diet. Flamingo's natural white-gray feathers turn pink or even red depending on the amount of carotene they consume with food. 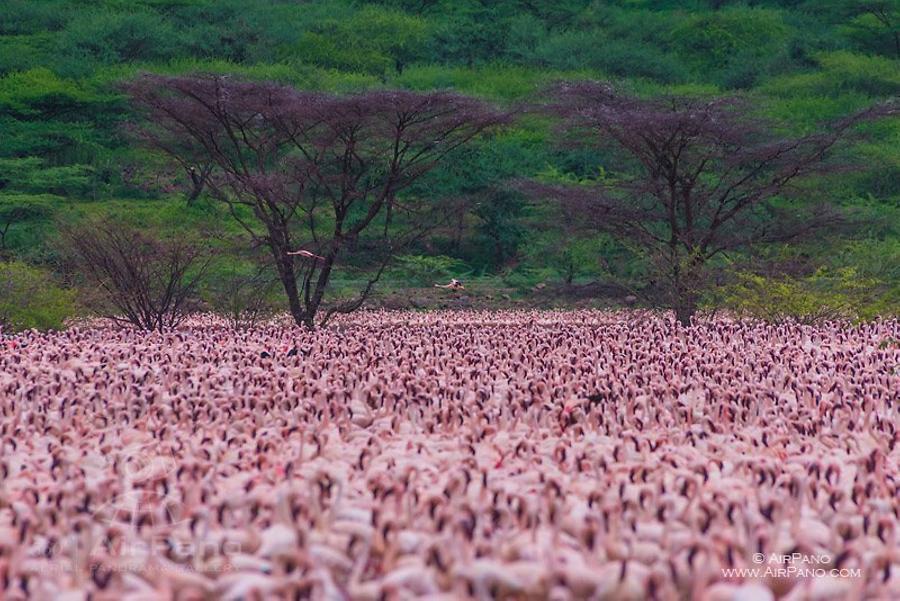 For example, carotene is contained in small red crustaceans. To preserve their color at a zoo, flamingos are kept on a special diet that includes carrots, sweet peppers, and crustaceans. Another source of carotene is blue-green algae called Cyanophyta Spirulina platensis. It can be found in some African waters. Therefore, despite the fact that flamingos don't nest in Kenya, they can't resist a nourishing food and come to Lake Nakuru and other lakes for algae.

The number of flamingos varies during a year depending on the water level and food availability, but at the peak of the season Lake Nakuru is covered by about half million of these graceful birds. However, heavy rainfalls hit the region in summer 2013, resulting in high water level in Lake Nakuru, which forced flamingos to search for sustenance elsewhere. 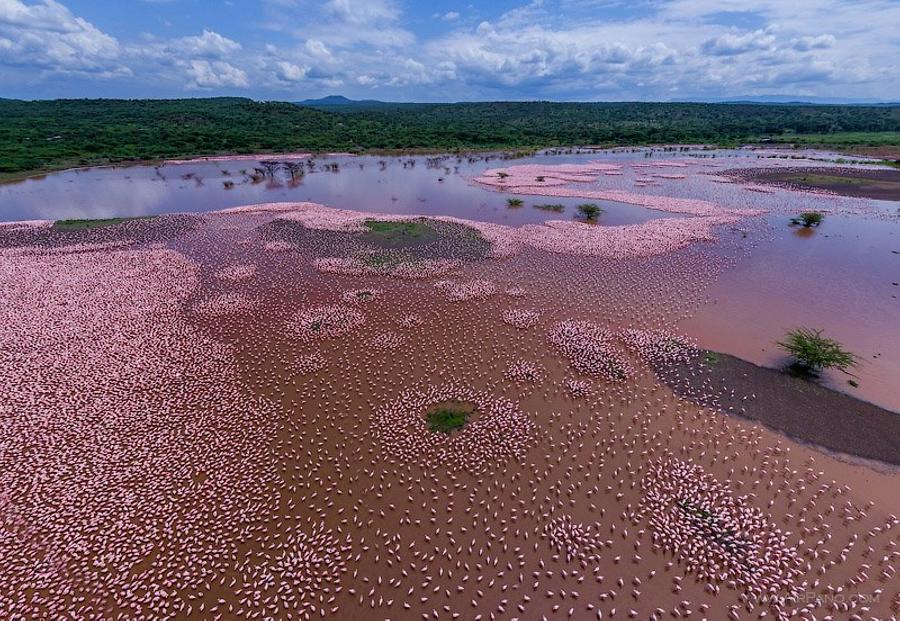 Lake Nakuru is a part of lake system cascading along the east coast of Africa and through the so-called fault zone from Lebanon to Mozambique. Lakes are located at different heights, so birds easily found a body of water not affected by the rain: Lake Bogoria that lies 100 kilometers north of Lake Nakuru. This is where we shot our spherical panoramas.

A saline, alkaline Lake Bogoria, which also has the status of a National Park, is smaller than Lake Nakuru and has an area of only 32 square kilometers. The lake is of geothermal origin with almost two dozen geysers; there is also a dormant Bogoria Volcano nearby. 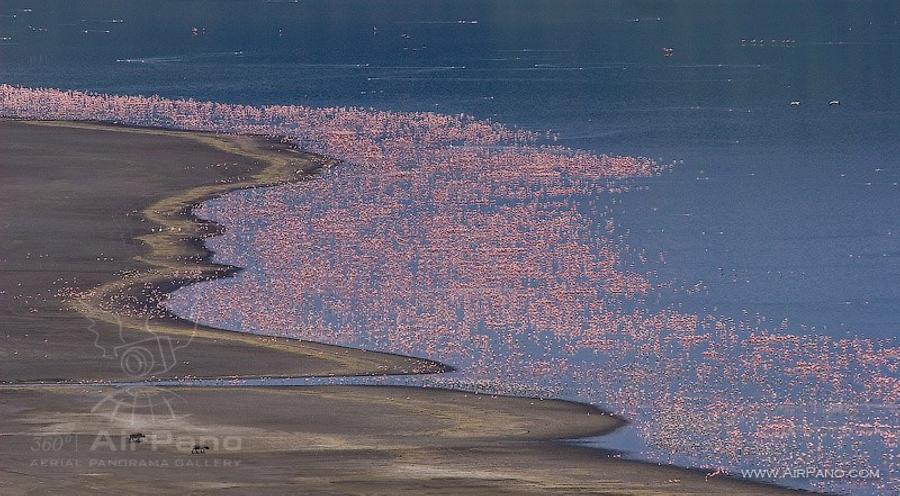 Tens of thousands flamingos come to Lake Bogoria from year to year. However, this time there were two million of birds due to Lake Nakuru unavailability.