Great Pyramids of Giza in Egypt#

Photo by Sergey Semenov, video and pilotage by Stas Sedov, members of the AirPano Team that is a member of the global-geography Consortium.

A year ago Sergey Semenov tried to rent a helicopter in Cairo to shoot the pyramids. It didn't work. "No photos allowed due of the close proximity of the military base" such was the explanation. However there was positive news — a story of a French science enthusiast, who bribed local guides and got on top of a pyramid with his equipment to measure some magnetic fields. We have to say that pyramids are surrounded by high fence with motion sensors; and special guards with machine guns and security dogs patrol the perimeter during non-tourist hours. Based on Sergey's story however we assumed that there was certain flexibility in Egyptian national security system, and that we might have a chance to fly there

We had to hurry up, because pyramid of Cheops was the only one of "Seven Wonders of the World" still standing; and the last "Transformers" movie made me think that the militant robots might actually destroy the pyramids for real next time 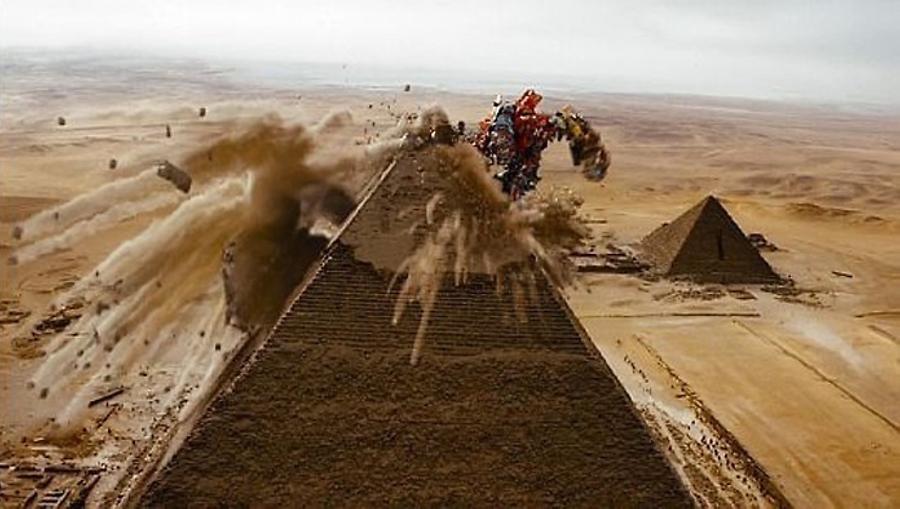 Frame from the movie «Transformers: Revenge of the Fallen» 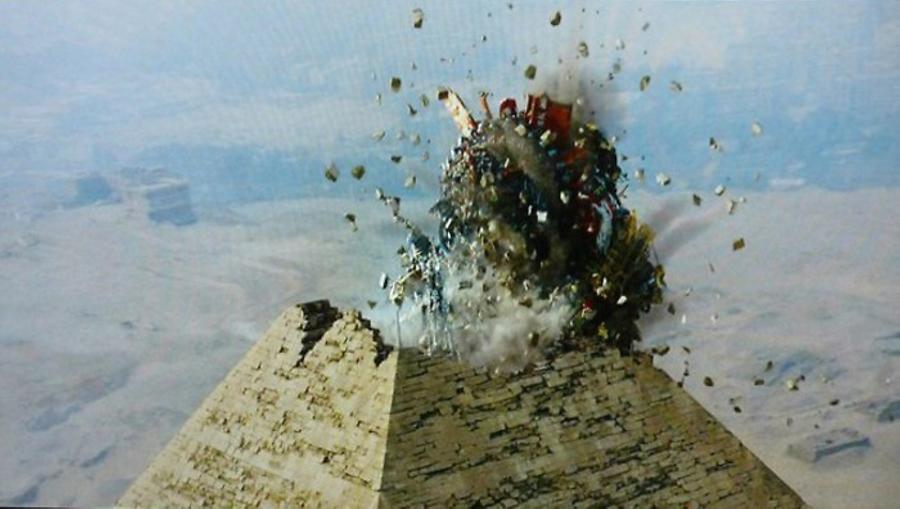 Frame from the movie «Transformers: Revenge of the Fallen»

We assembled the team and sent it off to Egypt. This time we decided to shoot with the help of a radio controlled helicopter. It's worth mentioning that according to news reports, there were series of protests and street gunfire in Cairo, so our guys were not very happy about the trip. I called my friend in Cairo to see what was really going on there, and he said, "There is gunfire in Downtown of Cairo, but the outskirts, where all the tourists stay, are quite safe. Just watch out for Cairo taxi drivers. Don't let them rob you"

So the guys left for Egypt to photograph pyramids. Their SMS saying, "we took off, and got arrested" did not surprise me. I was not worried a bit, thinking "It's Egypt. They won't hurt a tourist, they like them there." So when they texted me "It will cost 1000 US dollars to get us out flash card with photos back and continue shooting", I replied "No way! Stay where you are and keep bargaining".

It is considered rather rude in Eastern culture to accept the first price offered, so your counterpart would appreciate if you bargain just a little. It turned out to be true in our case. However, our guys were probably very uncomfortable in these circumstances — surrounded by 20 policeman and military, so they dropped the price just a touch, settling on 800 US dollars.

This price included access to the photographic location and police escort for entire day. So the photoshooting began.

Before we let one of the group members, Stas Sedov, the pilot of our RC helicopter, continue with his story, I want to say that Egypt is a very unique country, where they love tourists in general, and photographers in particular. My father went there 14 times and wants to keep it the way it is ...

"Quit playing games, boys! — Oleg told us one day last fall, — it's time for you to go to Cairo to shoot pyramids"

"Which Cairo? The one with revolution, gunfire and barricades on the streets?" — went through my mind, but I said out loud "Mmmm... When is our flight?"

It took me two weeks to assemble and set up another radio-controlled machine, which would serve as a back-up in case the main helicopter fails. Each helicopter was packed in a separate suitcase in case one bag gets lost. The total weight of our luggage — two helicopters, repair kit, and photo equipment (3 sets of cameras and lenses) — was 80 kilos.

Here I am admiring desert beauty of Egyptian landscapes, passing by our airplane windows. "Those cities look so much alike" — says sleepy Sergey pointing out of the window, and I notice that we in fact have been circling above one spot for over an hour. In a few minutes our captain announces that the rebels have occupied the international airport of Cairo and that our plane must remain in the air until the situation is resolved. How interesting!

We safely landed after about an hour of hovering above the airport, and immediately got into rebels' hands. Just kidding! I didn't notice any signs of a takeover; it was a normal peaceful life of an international airport. As it turned out, traffic controllers were on strike demanding a raise in salary.

After spending so much time on the plane we were anxious to start shooting the pyramids; but due to the delay we arrived to the closed gates. The name of our guide — a beautiful local girl — was Hinda, which surprisingly means "100 camels" in Arabic. We told her that we would try to get there early in the morning, before the museum opens (we wanted to take few shots without tourists).

Hours of operation of the local museum complex depend mainly on the timetable of tourist buses that bring most of the crowd to pyramids. The complex is open 8 am to 4 pm, and for the rest of the day it becomes a fortified military base, which we had no intentions to assault.

Early morning, 30 minutes before the opening, we are by the museum gate trying to convince the guards by money and speech to let us in. Absolutely useless! Against our expectations, gatekeepers are not interested in our money. I won't tell you how nervous we were while waiting for the beginning of our photo session. After one and a half hour we finally got to the first location only to face new difficulties.

Practically every local person living near pyramids makes his money here one way or another. We heard of camel drivers and other eclectic characters, but we had no idea about guards. It turned out that in addition to policemen in uniform there were policemen in plain clothes, military representatives in plain clothes, and the museum personnel near each pyramid. It would be hard to say who had more authority, perhaps, the army guys.

Hinda suggested talking to the military people right away to avoid further problems. We were prepared for that, and after a long conversation between Sergey and a tall camel rider in white robe and keffiyeh, we got permission to fly our helicopter. By that moment I was almost completely worn out by stress, uncertainty and heat, because there was absolutely no guarantee that our equipment will function properly in the condition of "over +35C in shade". Fortunately, everything worked fine, and we made two successful flights. 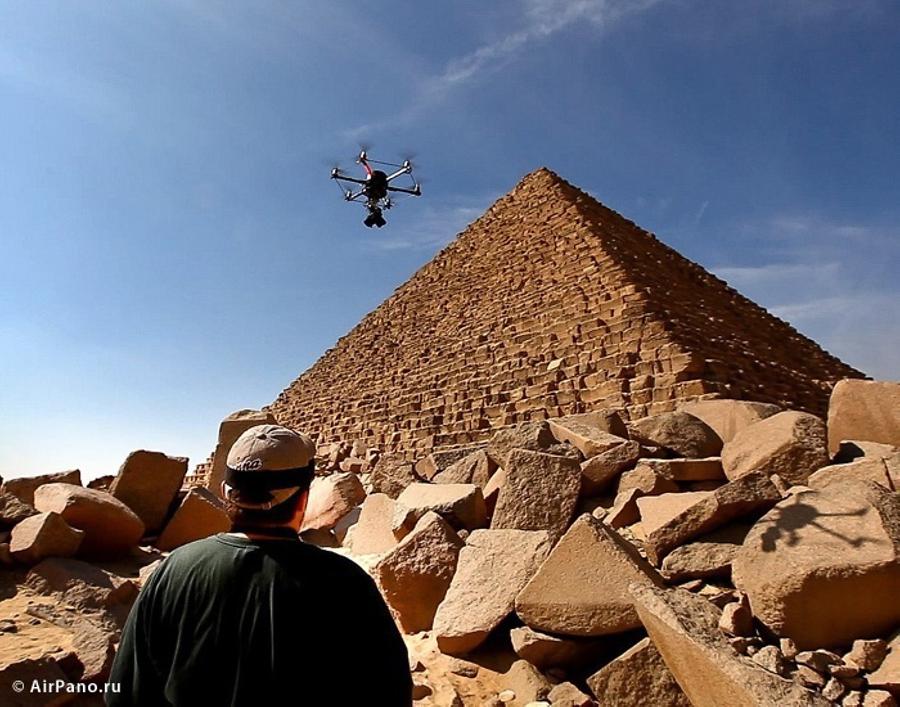 We moved to the second location, and when we took off our luck turned. One of the "plain-clothed" officers made a phone call and the whole army came to arrest us.

We were taken to the administrative building of the museum. There were about 20 people, some wore uniform, and some were obviously from the museum. It was rather difficult to figure out who was in charge in this crowd. At first there was a lot of shouting, our guide was very pale and hardly translated a word for us. Finally one of the museum managers demanded to see the photos and then took our flash card. After taking control over our most "valuable possession", the museum authority immediately changed his tone of voice, and the atmosphere around us relaxed. Everybody took turns checking out the "magic apparatus" that we flew near pyramids. It was a sign for us to begin negotiating terms of our photo project. Hinda translated the reply of the museum authority: "We'll sort everything out in 5-10 minutes".

These 5-10 minutes turned into about 4 hours of continuous negotiation; people were coming and going, making impossible requirements, calling the Minister of Culture, Minister of Police and who knows what else. Imagine the chaos of the Egyptian street market increased 10 fold, and you'll get the picture!

We had to go to the police office (Where we accidentally ran into the Prime Minister of the country. No kidding) to negotiate a police escort for the duration of our shooting — the museum people refused to give us their permission without the escort.

By the end of the day we managed to sort out almost all the formalities, and the conversation focused on the final fee for taking pictures. Egyptians asked about 1000 US dollars. Everything would be official, with receipts and other paperwork. Of course, there was no such thing as official permit for aerial photography, and so they offered us to buy a permit for professional photography: "if you shoot from the air, you must be a professional!" By the way, there is no problem to shoot with a regular pro photo camera around pyramids, but not inside. After some more bargaining we dropped the price to 800 USD, and finally purchased this precious piece of paper and a police escort. 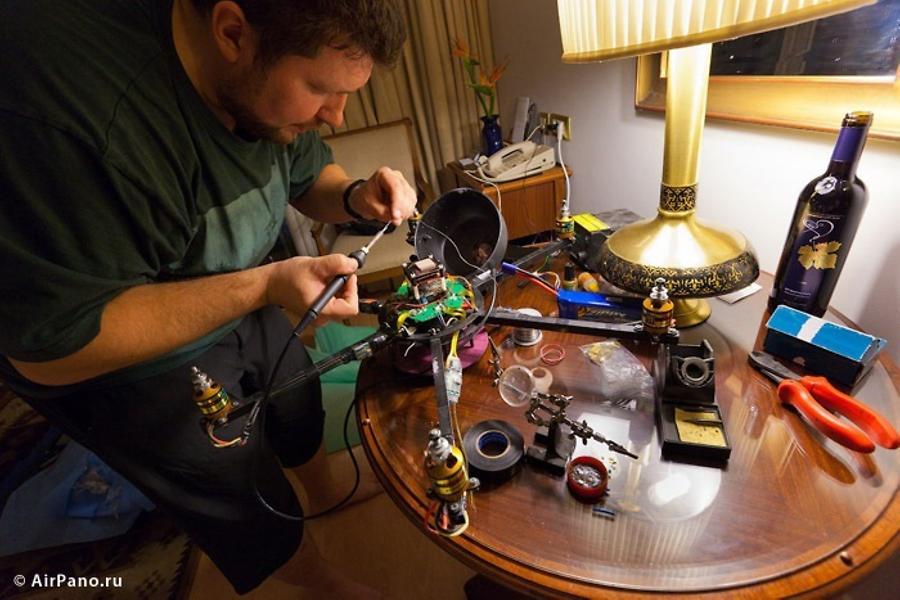 Stas is reparing the R/C helicopter

I can describe the following day with only one phrase — we worked like plantation slaves!

Our permit covered practically the entire territory of the pyramids. The police protected us from annoing bypassers and local beggars. The museum management let us to the Sphinx 30 minutes before the main crowd, for which I am very grateful. Too bad we couldn't get on the archeological ramp by the feet of the statue, so we had to shoot from the side. Having very limited visibility, I was concerned that our helicopter could add another "special feature" to the Sphinx's face with already missing nose by hitting its eye; but everything went well. 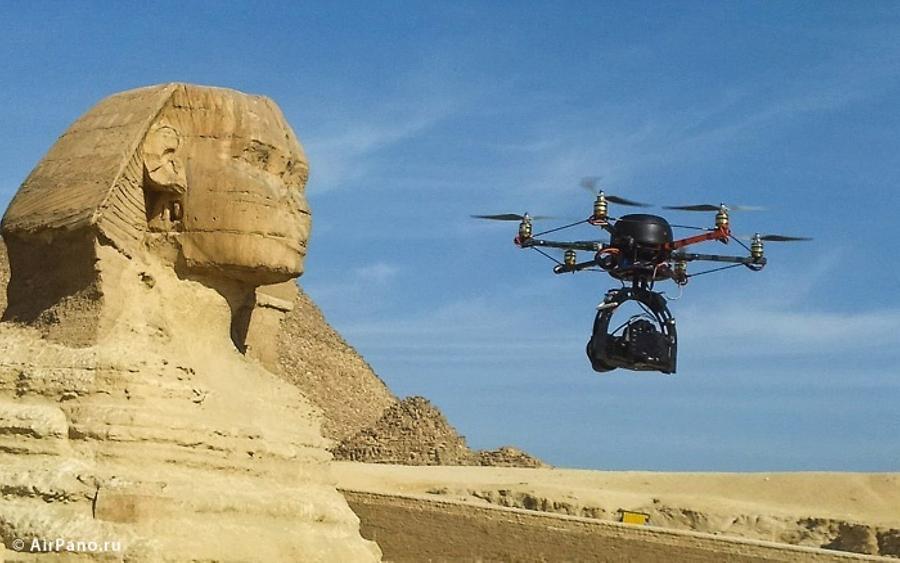 By the end of the day we became such good friends with our escort that we didn't want to part. Only deputy director of the museum, rushed us: "The museum is a military zone." Last tourists leave the territory at 4 pm, and we must go by 4:30 pm otherwise our escort would have serious problems... 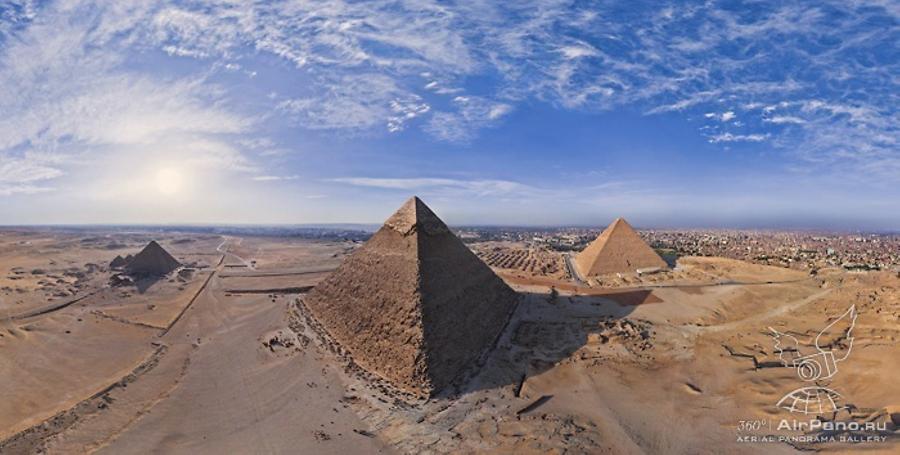 That day we also wanted to photograph the famous, beautiful old Mosque of Muhammad Ali, located in the center of Cairo. However because of the ongoing protests our guide refused to go there. After stuff of the museum confirmed her words we decided to skip it.

We were so tired that we fell asleep the moment our heads touched the pillows in the hotel, which was located just a couple of blocks from pyramids. Tomorrow we were going home.

At the airport screening a security officer told us that in Egypt it was prohibited to carry helicopters in one's luggage. After a short negotiation I took out 20-dollar bill and he politely let me though. Our second suitcase with the helicopter was received much better and cost only 10 bucks.

Here we were — Sergey and I — sitting in a café with the notebook, going through the images while waiting for our flight; and on the news they were saying that 19 people were killed yesterday in Cairo during protests on Tahrir Square... Egypt is an amazing country. It is very friendly to tourists. As one of the museum authorities put it, "Egypt has only two commodities: tourism and Suez Canal".

And now you can look down at these pyramids, from the bird's eye view. 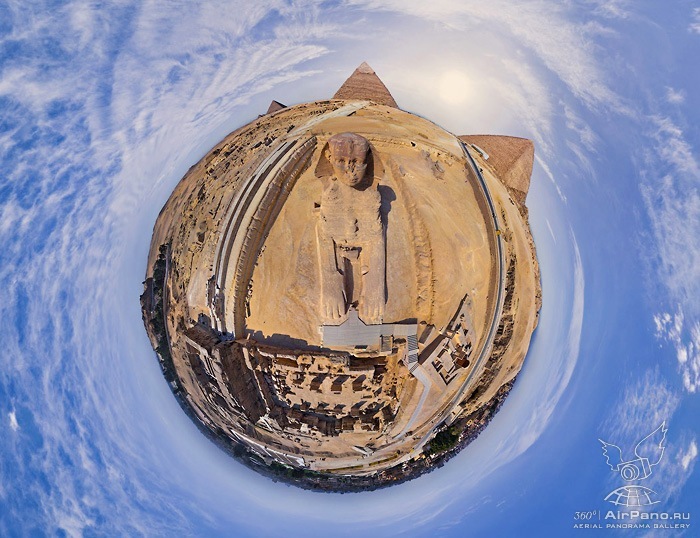 9 Panoramas of Great Pyramids of Giza in Egypt