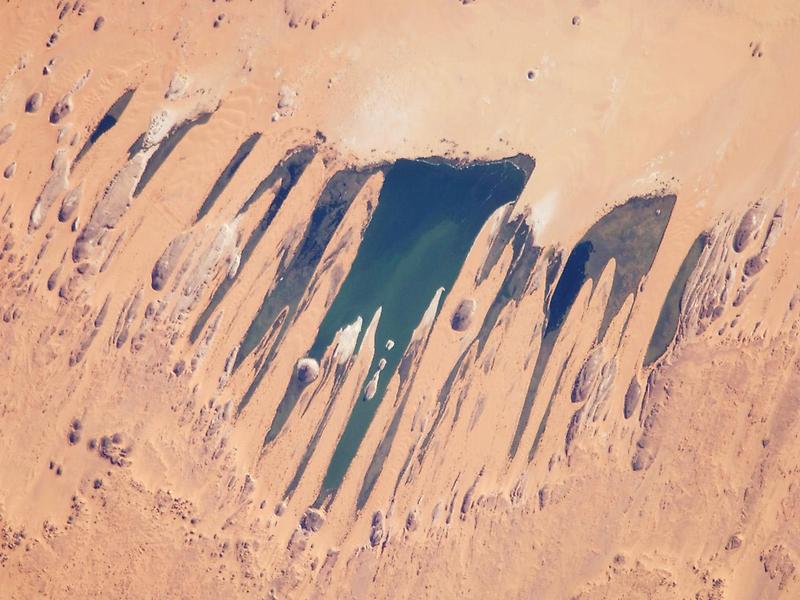 Image Courtesy of NASA, under PD
This astronaut photograph features one of the largest of a series of ten mostly fresh water lakes in the Ounianga Basin in the heart of the Sahara Desert of northeastern Chad. The lakes are remnants of a single large lake that once occupied this remote area approximately 11,000 to 5,000 years ago.

As the climate dried out during the subsequent millennia, the lake shrank, and large, wind-driven sand dunes invaded the original depression, dividing it into several smaller basins. The area shown in this image is approximately 11 by 9 km (7 by 5.5 mi). The lakes dark surfaces are almost completely segregated by linear, orange sand dunes that stream into the depression from the northeast.

The almost-year-round northeast winds and cloudless skies make for very high evaporation rates; an evaporation rate of more than 6 m per year has been measured in one of the nearby lakes. Despite this high rate of water loss, only one of the ten lakes is saline. The reason for the apparent paradox - fresh water lakes in the heart of the desert - is that fresh water from a very large aquifer reaches the surface in the Ounianga Depression.

The aquifer is large enough to keep supplying the small lakes with water despite the high evaporation rate. Mats of floating reeds also reduce the evaporation in places. The lakes form a hydrological system that is unique in the Sahara Desert.