Among thousands of comments on our website, there was one that caught our attention: "You have photographed the entire Earth. Now it is time to shoot in Space".

We thought "Why not?" and in the summer of 2012 we sent a probe with photographic equipment to the stratosphere, taking spherical panoramas from the near space. We have a small team and we're always busy running behind.

Recent record-breaking jump from the stratosphere by Felix Baumgartner reminded us about this flight, and we decided to cancel the planned publication of the panoramas from Europe. As a result, instead of a virtual tour of the Vatican, we're offering to your attention the report about the AirPano shooting the near space.

The stratosphere is situated between about 10 km (6 mi) and 50 km (30 mi) altitude above the Earth's atmosphere. The stratosphere has 2 layers: the lower one (11-25 km) and the upper one (25-50 km). It's worthy to mention that air temperature in the lower layer can reach -60 ° C, while the upper layer is being gradually warmed up to +0,8 ° C and it reaches zero at the altitude of about 45 kilometers.

At altitudes from 15-20 to 55-60 kilometers lies the ozone layer that protects the Earth from the sun's deadly radiation.

The top layer of the stratosphere is often called "near space".

Sending a camera into the stratosphere and getting it back is a technically challenging task, so we asked project Netwind.ru, headed by Denis Efremov, to help us to do it. They have extensive experience in this field and all the necessary permits from regulatory authorities.

Sending cameras into the near space is done by using balloons filled with helium. These balloons rise 35-37 kilometers above the ground, gradually increasing in size until they are as big as three-story house. At this altitude balloons suppose to burst and send cameras safely to the ground by parachute. To shoot the moment of the balloon's explosion, we set one of the cameras up vertically in video mode. 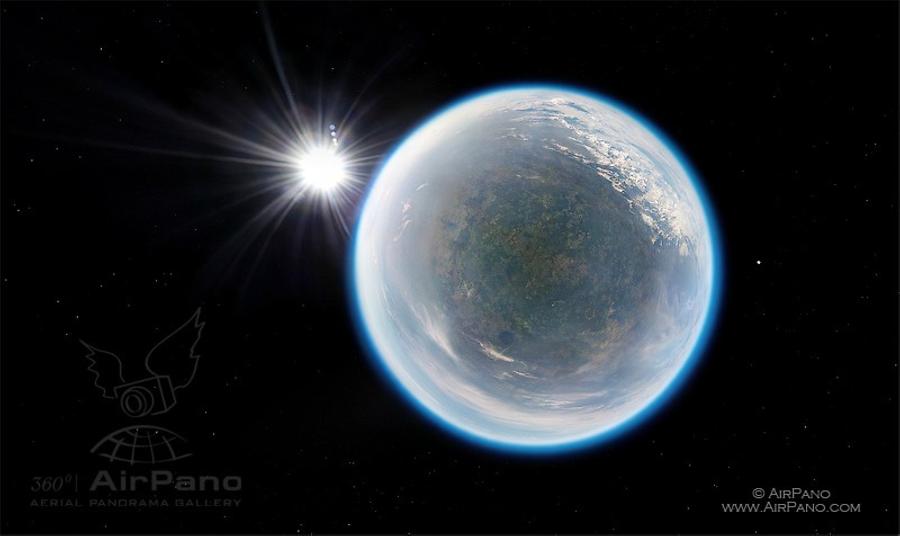 View of the Earth from 30 km
© AirPano

Balloons had to be launched before dawn in order to shoot the Earth in a beautiful morning light. The night was amazing: all the way to the launch site in the North-East Moscow region our road was lit by headlights, stars, and the moon. Soon the work was in full swing. Our colleagues from Netwind were right on time: they quickly unpacked their things and installed the lighting. We found out that all the necessary equipment could hardly fit into two cars! 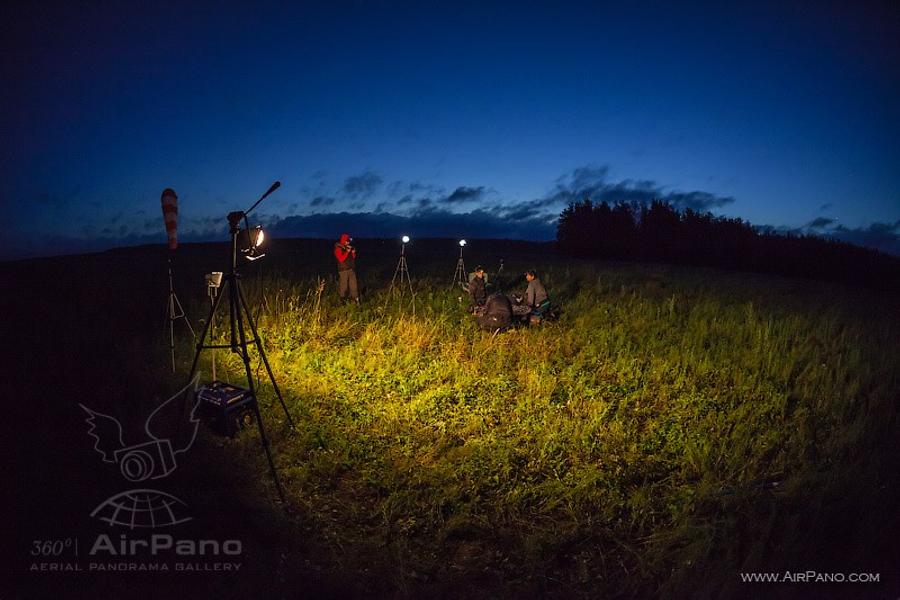 A calm weather was promising a good probe launch. But a lot of things had to be checked before the launch. Cameras have to operate in extremely cold conditions: batteries can be damaged, and cover lenses can get misted over or get covered with ice crystals. Cameras have several search GPS-beacons attached to them so they could be found after landing on the ground. However, there is a possibility of failure. That's why assembly process requires a lot of attention. 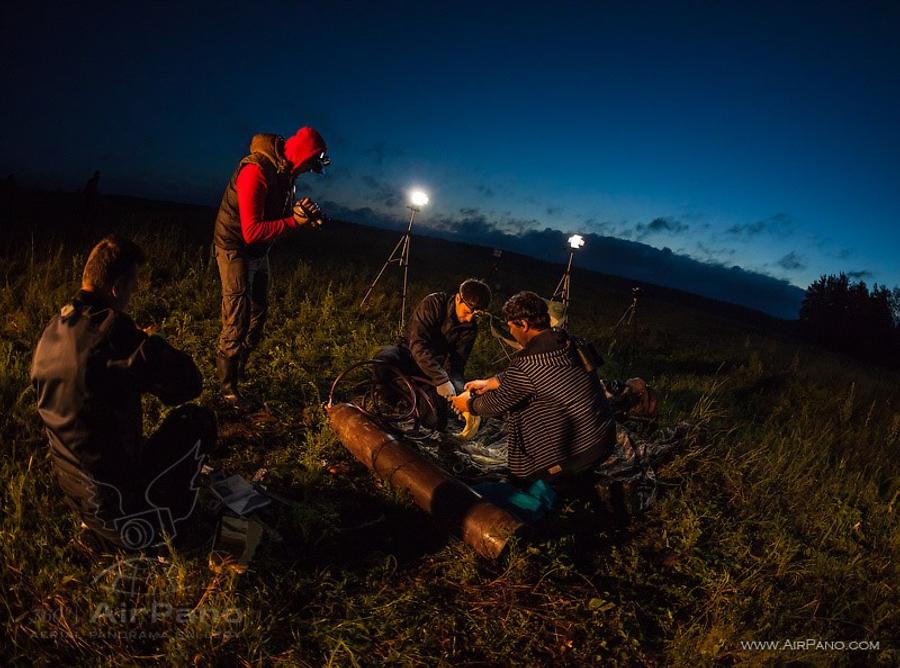 By morning, all preparations were completed, and the balloon sailed slowly into the sky above the rolling fog. One of the pilots even filmed the launch of the balloon with a radio-controlled model airplane! All we had to do was wait and see what our balloon cameras would show on the screen. 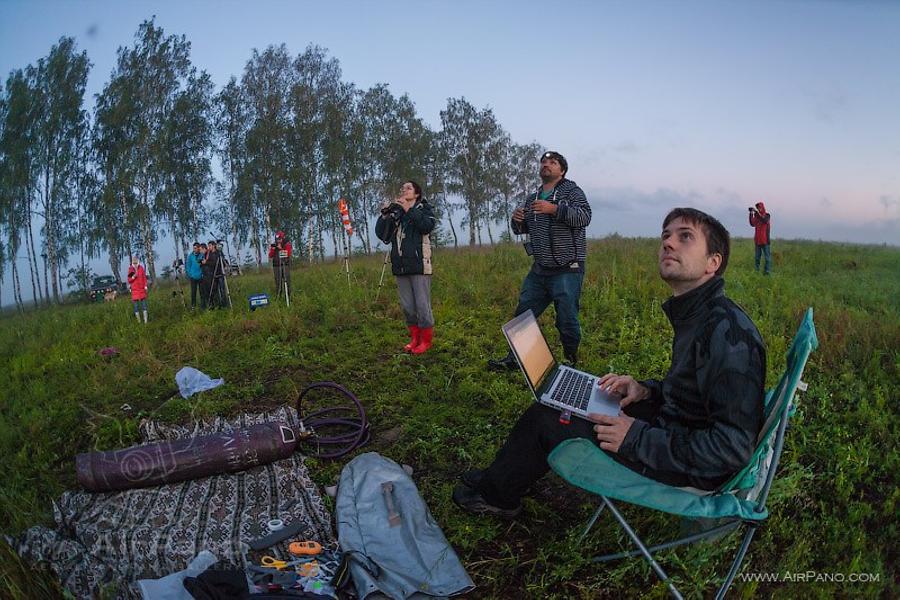 Start of the flight
© AirPano

Some time later we saw beautiful clouds floating past the balloon while it was lit by sun rays. Everything went according to the plan. Upon reaching the altitude of 35-37 kilometers the balloon bursted and cameras started to descend. GPS-beacons sent their coordinates several kilometers above the ground and went silent. The next transmission time was supposed to be from their landing position. But it never happened. This is why we had to cover five miles in diameter in order to find the camera. The search ended up going for 2 days straight: our whole team made several trips to the landing area and searched for camera unit in the dark forest, making our way through the faint trails without any results. It's hard enough to find a small camera in the forest with more or less precise coordinates, but without them it's almost impossible. Furthermore, simultaneous failure of two GPS-beacons looked suspicious, and we thought the camera was not in the forest, but in a lake located near to the search area. Was it a technical failure or a water landing: we couldn't find out the exact cause. A few thousand dollars worth of equipment was lost, and we had to do it all over again.

So a week later we had to repeat the whole process again. The weather was great and the moon and stars gave us new hopes for success. The sky was cloudy but, nonetheless, the luck was on our side. The clouds spared us and photo shoot was successful: on panorama you can see forests, fields, and Pleshcheyevo lake by Pereslavl-Zalesskiy. This time there were three GPS-beacons with cameras and they didn't fail us. 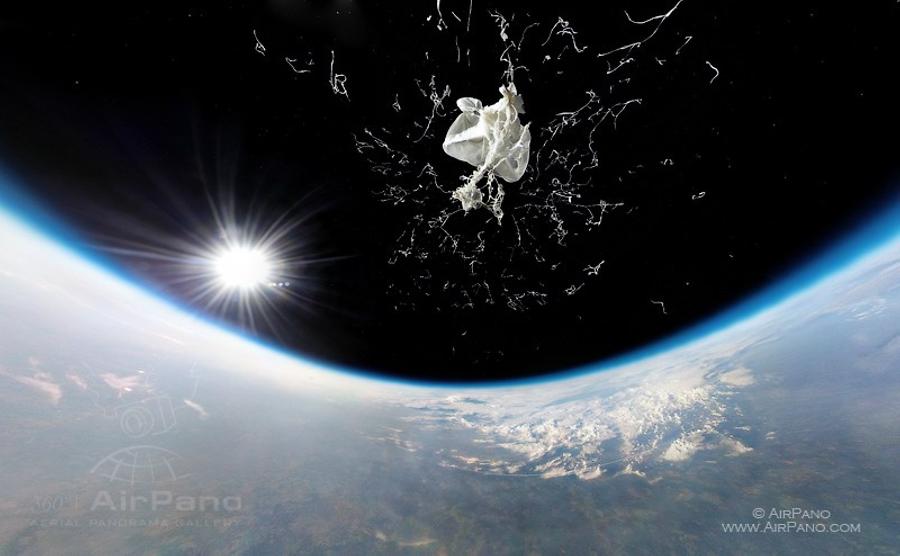 Explosion of the balloon
© AirPano

Cameras landed on the field in the outskirts of one local village attracting attention of cows. But our equipment was not edible, so we found it intact. We have a video of our trip to the cameras' landing site: you can see all the rough roads and small bridges we had to cross to get there. But it was worth it! We finally had a spheric panorama of the Earth from the altitude of 37 kilometers.

5 panoramas of Flight to Stratosphere