Gibraltar, even today a thorn in the body of Spain#

The Pictures were taken by the author in 1996. They are part of the archive “Picture Flood Jontes” 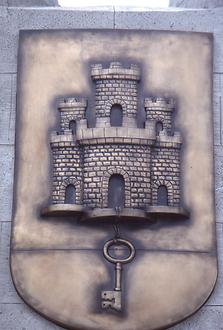 If British overseas territories are mentioned one thinks of former colonies created by the world power Great Britain in Africa, Asia, America and Oceania of which most have slowly and quietly slipped away, but also some under strong pains of the former world power. Today, many of those countries have more or less problems how to deal with their independence.

Neither in tropical nor subtropical areas many colonies are left. One of the few ones is situated just around the corner, namely at the southern tip of the Iberian island, where you can see Africa across the ocean with your own eyes just 14 kilometres away. The persistence to keep this colony is understandable because the rock controls the entrance to the Mediterranean from the Atlantic. The coat of arms of Gibraltar expresses it clearly: The fortress and the key are the heraldic symbols and mark the strategic importance.

The British army and the navy have a military base here since 1704. In the peace treaty of Utrecht, Spain had to abandon Gibraltar in 1713. Community in NATO no matter: Until today, Spain has not really accepted the fact that Gibraltar is not part of Spain. The area comprises 6.5 square kilometers. Only a narrow coastal zone which is used to the last metre is left for the town and the airport. The airport is a real curiosity: When you cross the border of Spain by car or on foot, you have to cross the runway. When an airplane is starting or landing the barrier goes down and you can’t go further.

Actually, Gibraltar is only a rock with a peak which rises 426 metres high above the sea. It is situated within sight just opposite to the Spanish city Algeciras. 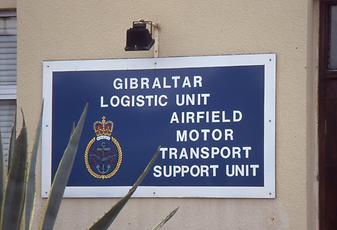 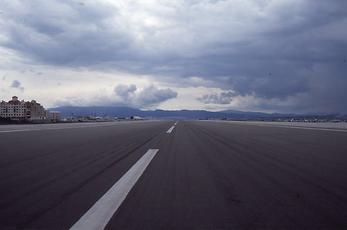 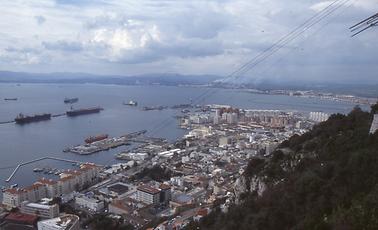 City and port – In the distance in the background, under CC BY 4.0

As is well known the rebelling General Franco could only take over the power after the bloody Spanish Civil War because he was supported by Germany and Italy. The Republicans relied on the Soviet Union and the Communist “Spanish Combatants” (International Brigades) from across Europe. The end of the war is well known.

After the outbreak of the Second World War Adolf Hitler thought that Spain should show gratitude towards Germany. He tried to win Franco as an ally of Germany. However, Franco was very hesitant. Even a meeting between the two dictators did not lead to an alliance. Anyway, the German Armed Forces wanted to get possession of Gibraltar with the help of Spain. Gibraltar was a key to Great Britain which opened the access to the entire Mediterranean region and to the strong British positions there.

There were German officers as agents in Algeciras. They observed with the help of telescopes what happened in heavily armed Gibraltar. There was the hope that with the consent of Spain they could weaken the fortress with most severe artillery fire and make an attack easy.

Due to logistical reasons the plan could not be realized. To bring the guns and mortars of the heaviest calibre near Gibraltar into firing position meant that Germany would have had to reinforce countless bridges, to enlarge roads and local bypasses. They had to give up this plan.

From far away seen, the rock appears already impressive. When you see the rock from outside it is difficult to imagine that there are tunnels and caverns of a length of 50km in the rock. 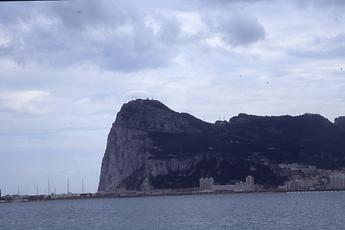 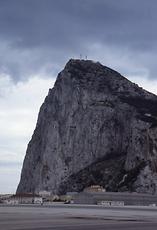 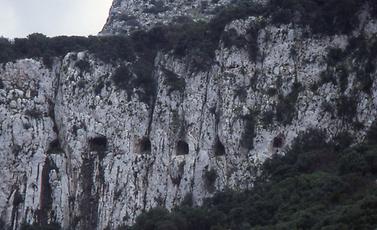 There is a curious historical attempt to defend Gibraltar: a mortar, hewn entirely out of a rock in 1771. The mortar was to be used against enemy attacks. The attempt failed and most of the bullets made of stone struck into the own walls 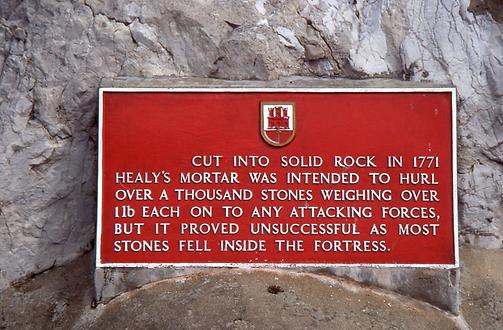 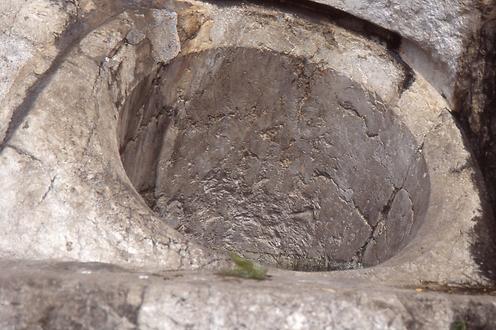 The strategic importance of the location is documented by many monuments. 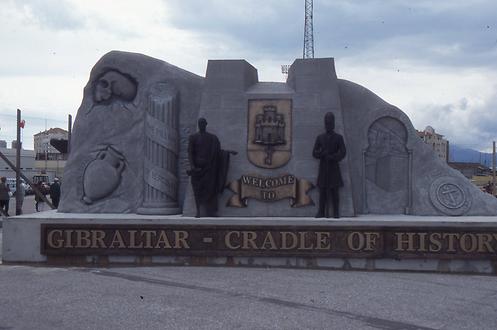 Monument: “Gibraltar, the cradle of the history”, under CC BY 4.0 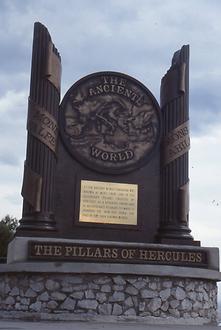 Monument: “Gibraltar, the cradle of the history”, under CC BY 4.0

In ancient times, the world ended with the Pillars of Hercules. One of the pillars was Gibraltar. The other pillar was located on the other side and within sight, in today’s Morocco. It was called “Non plus ultra“/ Ultimate. It changed only under the Roman-German emperor Karl V, in whose empire the sun never set. Then, continental European risked taking the sea route around Africa to India. Karl’s saying: “Plus ultra” / “Beyond” was an eloquent testimony to this. His ships also passed through Gibraltar. 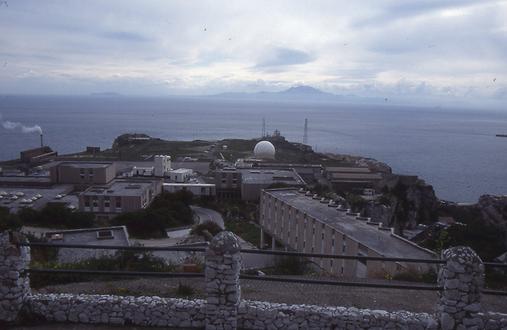 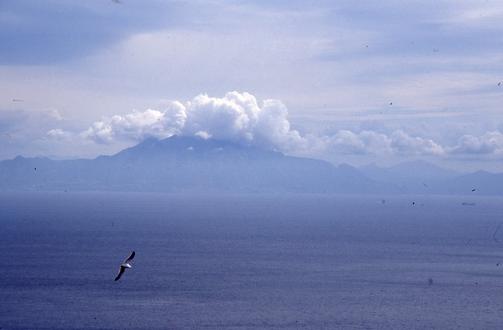 In Gibraltar there is also an interesting living link to Afria: The Gibraltar apes, zoologically Macaca silvanus are the only primates living free in Europe. Scientists are not sure whether they are the rest of an indigines species or whethter people have brought them from Africa to Gibraltar.

One opinion is that the British reign over Gibraltar will last as long as there are still apes there. They have no need to fight for survival since they live, as their well-nourished bodies prove, from food which they get from tourists. They have also lost their natural shyness. 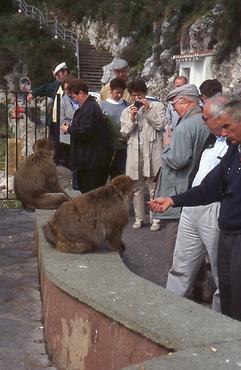 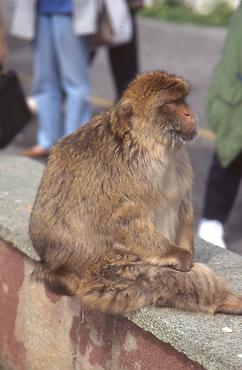 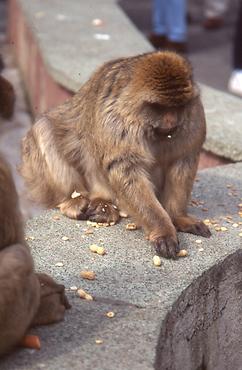 Gibraltar was also the entrance gate of Islam into Europe when Berber-Arabic moors conquered the settlement in 711. The name comes from Arabic Jabal Tariq „Hill of Tarik”, a foreign military leader. They had to leave the Iberian Peninsula in 1495 after the successful Catholic Reconquista and the end of the caliphate of Cordoba. The harbour has always played an important role. The 14 km broad waterway between Europe and Africa is one of the most popular waterways worldwide. Around 300 merchant ships pass through on a daily basis. 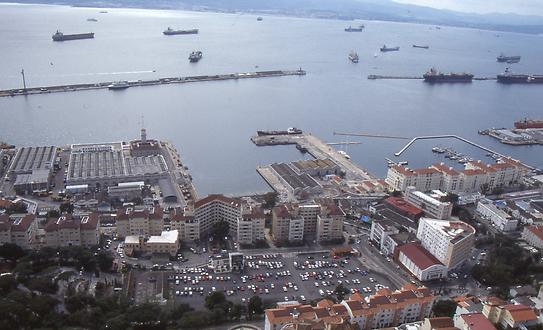 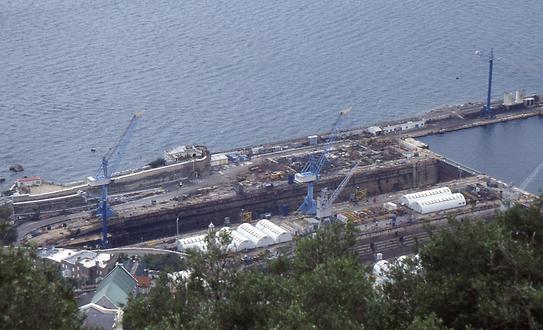 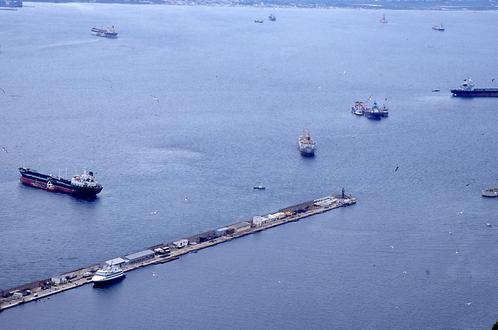 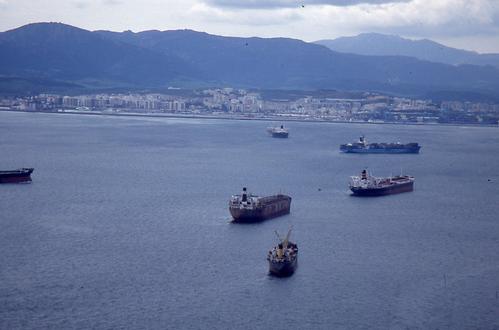 The British presence is everywhere. English is the only official language. The Spanish language can be heard or read in everyday life only to a small extent. 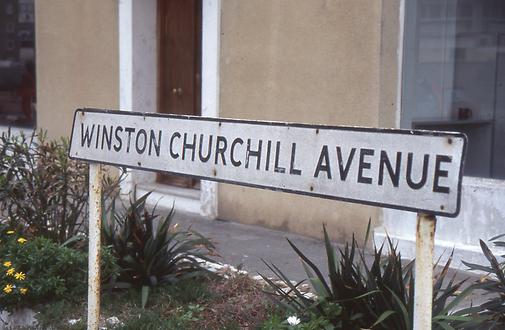 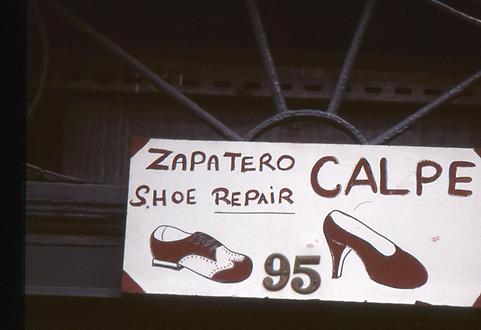 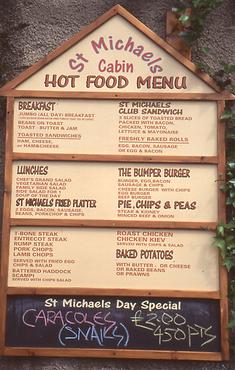 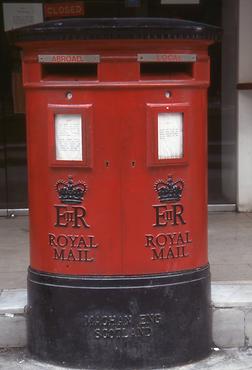 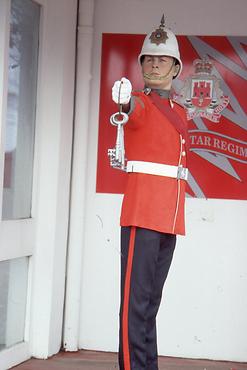 Martial and with a certain funny English understatement, under CC BY 4.0
Zum deutschen Original