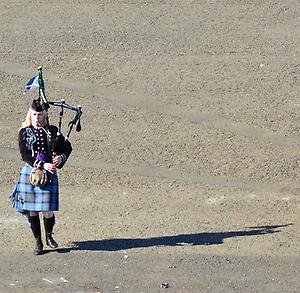 When you think about Scotland you think about kilts and bagpipes. It's traditional. Bagpipes are in fact one of the oldest musical instruments, mainly used to provide dance music. Their archaic form was used centuries ago in nearly every part of Europe, in Turkey, the Caucasus, North Africa and around the Persian Gulf. It is depicted in historical documents, paintings and carvings. According to experts there are approximately 180 different regional designs of bagpipes in Europe, even though most use the name synonymously with the Great Highland bagpipe. 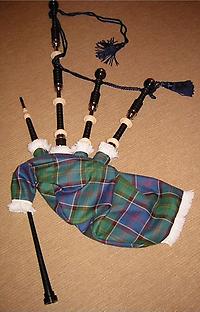 Great Highland Bagpipe
Photo:Mushummel taken from public domain Wikimedia commons
Bagpipes are reed instruments with a bag feeding air to the enclosed reeds. Minimal requirements for an the instrument to be called bagpipe are an available air supply, usually in the form of a human blowing into the pipe, a bag, a chanter and at least one (often more than one) drone. Another form of the air supply is the bellows, which was introduced in the 16th or 17th century. A bag, often made of leather or sometimes of synthetic materials, has to be airtight to function properly, as it allows maintaining sound continuously.

The chanter, the melody pipe, has eight fingerholes and is played with two hands. Some local varieties have two chanters, mainly found in North Africa, the Balkans and Southwest Asia. Inside the chanter a reed (depending on the area one or two reeds) produces the sound. The other pipes sticking out of the bag are the so-called drones. Drones produce a constant harmonizing note with the aid of reeds, even though they are not fingered. The position of them can vary, they can lie over your shoulder, across the arm or parallel to the chanter.

It is assued that the origin of bagpipes can be traced back to the ancient Egyptians. A sculpture of bagpipes, dated to 1000 B.C., was discovered in the Middle East. Romans and Celts spread the bagpipes throughout Europe. In Medieval times they were very popular. Around 1500 the design changed as a second drone was added. Schools teaching how to play bagpipes were founded. A law prohibiting playing this instrument was adopted in Scotland after the insurrection of the Jacobites in 1745 and schools were closed. Bagpipes were in danger of disappearing in the Scottish Highlands as even writing down music was forbidden. Later on the law was abolished.

From the 18th century onwards the bagpipe lost its significance and popularity as it has a restricted range and function. In some areas the musical instrument was maintained in its original form, like in southern Italy, the Balkans and Brittany, while in some parts of Europe it disappeared. They even vanished in Great Brittan, where one would not think this is possible, however they did remain in the Scottish Highlands. In the British Empire the use of bagpipes boomed during World War I and World War II as many pipers were trained for military forces. Most Europeans thought little of the instrument. The decline often lasted well into the 20th century. 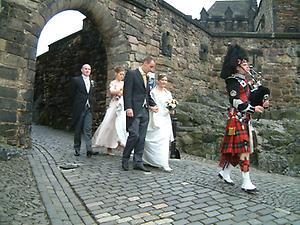 Playing bagpipes is getting popular again, in part due to the revival of folk music and dance. This traditional instrument is often used on special occasions like weddings, funerals, memorials, formal events in universities or during formal military ceremonies. Film productions also used the bagpipe in films picturing historical moments, like in "Braveheart". The Irish stage production "Riverdance" uses bagpipes in their shows touring the world. Young musicians use the music instrument in rock music, metal, hip-hop, punk or jazz, shocking traditionalists.

Nearly every elementary school in the Scottish Highlands has its own bagpipe teacher. Eight year olds eagerly await the time when their fingers are large enough to grab the practice flute, the chanter. It's a social event as the first one of the school class who can, it is cool.

You learn to play the instrument with the aid of the practice chanter, on which you learn to play the musical scale and melodies. After mastering them, the switch to the bagpipe can be made, but the chanter should not be put too far away as new plays are still rehearsed on it. If you are older and an expert you can earn your money while touring the country and performing at Highland Games, music festivals and agricultural fairs (mainly in Scotland).

Every one can learn to play the bagpipe, as long as a minimum musicality exists. But learning to play should not be undertaken lightly as practicing each day is required.

There are two pieces of wisdom concerning bag pipes. The first one states that it takes seven years to complete the apprenticeship years and after that, when one is born to it, you stand at the gate of understanding and can commune with times gone by. The second lore states that if you practice and drink (alcohol) too much, it can lead to the stiffening of your palm. Both pieces of wisdom may well be truer than one would like.