Nearly everyone travelling to South Africa plans safaris to get a view of the elusive Big 5. Mostly this is easy as the animals are stuck in a huge pen to await the tourist masses. If you want a real challenge, try to spot Scotland's Big 5 in the rolling expanses of Scotland! How much more rewarding must it feel to spot a small red animal in the endless wilds?

Scotland's Big 5 are five iconic wild animals which were elected on the internet. If you wondered what the small red animal mentioned above is, it is the red squirrel. The other four are the red deer, the otter, the harbour seal and the golden eagle. They prevailed against opponents like the Scottish wildcat, pine marten and the puffin. 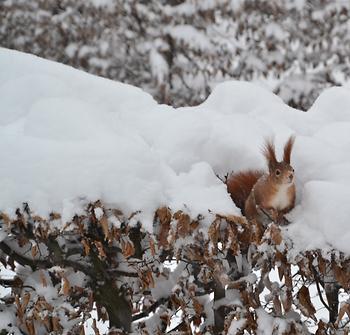 Red squirrels, pet name 'the tufted acrobat', are the only native squirrel species of the United Kingdom. They number approximately 120.000 in Scotland which is nearly 80% of the total population of the UK. Red squirrel numbers decline due to the loss of woodland areas, competition of non native grey squirrels (they were introduced from North America), and squirrelpox disease. They have a body length of 18 to 24 centimetres, four fingers and five toes. As the name implies they have red coats, varying from dark to pale red. Bushy tails are used to help them balance, as umbrellas and to keep them warm while sleeping. Nuts, berries, fungi, bark, birds' eggs, Scots pine cones and seeds are their preferred food. They do not get very old, they averagely live three to four years.
Watching them in their natural habitats of Scots pine and oak woodland areas is always fun even though it is a bit nerve-racking as they jump from branch to branch seemingly defying gravity. Most of the time squirrels remain in the tree canopies. They adapted to human influences and habitation and now they can be found in parks and commercial forestry plantations. The best spots for observing them in the wild are found in the central Highlands (area of Cairngorm) or in the Dalbeattie Forest where a Red Squirrel Walk was established. 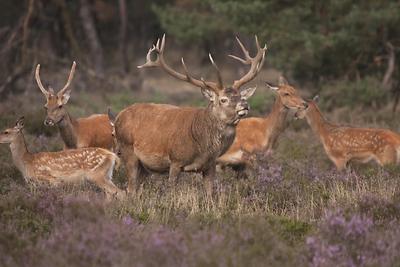 Red deer, pet name 'the roaring monarch', are Britain's largest land mammals. There are different names for different gender and ages, small ones are called calves, female ones are hinds and male animals are called stags. Approximately 350.000 red deer still live in Scotland. Today red deer in Scotland mostly live in hilly areas with only few trees, although originally they roamed the forests in single-sex herds. Stags can reach body lengths of up to two and a half metres and weigh well over 100kg. Hinds are smaller and lighter. The major outwardly difference (at least during some seasons) is that females do not have antlers. Antlers can reach lengths of more than one metre and they grow again every year as they are shed periodically. Red deer hair is reddish-brown, sometimes it is greyer or darker brown in winter. They feed on grass, harvested leafs, lignified shoots, tree bark, herbs, leafs, buds, acorns, berries and other fruits of the wood and field.
Red deer can best be spotted in the Scottish Highlands. The best season to observe them is autumn, followed by winter when they seek food in lower altitudes because of the harsh weather. If you want to see them, you have to keep downwind of them as they have an acute sense of scent. 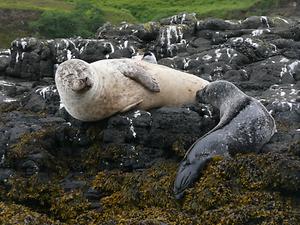 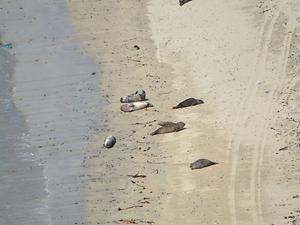 Seals
© Elisabeth Ertl
Of the harbour seal, pet name 'the curios seadog', it is said 'one seal, two lives' which means that their movements and behaviour differ strongly between their two living spaces. They live on land, where they are lazy-looking and ponderous, and in the sea, where they are fast and agile. Harbour seals feed in the water and only haul themselves out on land to digest their meals, sleep and for birthing. About 29.000 harbour seals live in Scotland which is roughly four fifths of the whole population living in the United Kingdom. These animals have rounded heads with large, dark eyes and whiskers on their muzzles. They have big flippers and an average body length of 135 to 145cm. Mottled coats with many small spots distinguish them from other seal species. In the wild they can reach ages of about twenty-five years. They mainly live on fish, for example on herring, sandeels, whitefish, flatfish and sprats, but also on octopus, shrimp and squids. Every day they need three to five kilogram of food.
Generally speaking you can spot them nearly everywhere along the coast. But there are areas where the chances of seeing them are much higher, for instance on the Northern Isles (Shetland, Orkney), the Hebrides, stretches of the west coast from northern Skye to Arran and the Moray Firth in the east. 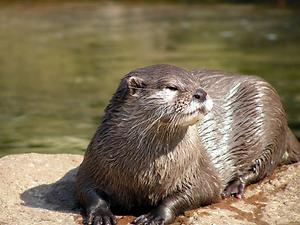 Otters, pet name 'the whiskered diver', are very playful animals, unlike most other animals. It may appear strange, but male otters are called dogs while female ones are bitches and small ones are cubs. They are very supple creatures in or on the water, whereas they waddle a bit on land. There are approximately 8.000 animals scattered over almost every part of Scotland. Efforts were undertaken to raise their numbers. For example, waterborne pollution has been reduced through better controls. The number of otters killed on the road has been reduced by implementing otter-friendly measures. It does not matter whether a water body has fresh water or salt water, otters live in both, adapting their diet to their surroundings. In freshwater their diet consists mostly of a variety of freshwater fish, eels and amphibians, while otters living on the coast prefer crabs and fish. Otter bodies reach lengths of 65 to 90cm and weights between 7 and 15 kilograms. They have a brown fur while their undersides are often pale. Two layers of fur characterize an otter pelt, an outer waterproof layer and a dense and insulating one underneath. Flat-topped heads dominated by impressive whiskers, cute webbed toes, bright eyes and a powerful tail mark this animal. Their nostrils and ears are closable and therefore perfect for diving.
If you want to see otters in the wild, the best places to spot them are on the west coast of Scotland and the Northern Islands (especially around Shetland). The best time for spotting them depends on whether they live on the coast where they are active by day or inland where they are nocturnal animals. 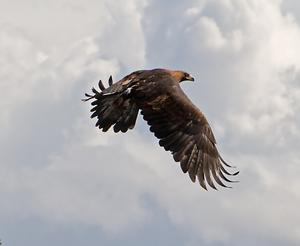 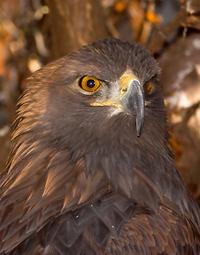 Last but not least of Scotland's Big 5 is the golden eagle, pet name 'the high flyer'. For many people an eagle flying is the perfect symbol for freedom. Seeing an eagle soar over the mountains is surely one of the most beautiful and unforgettable experiences of a lifetime. Compared to most countries of Europe Scotland has, with 440 pairs of golden eagles, a relatively large population. Golden eagles live in so-called eyries, nests which are usually high up in the mountains, perched on rocky ledges. Territories can vary in size between 28 and 113 square kilometres. The predators can be found in inland glens and sea cliffs and even in moors and bogs. Their eyesight is especially keen, they can see you from a distance of more than one and a half kilometres. The relationship between head size and eye size of eagles is much bigger than that of humans. Feathers are dark brown. At the back of the head adult golden eagles have a pale yellowish plume, from which their name derives. Outgrown birds can reach wingspans of more than two metres. Female eagles are, unlike many other animals, heavier (5,2kg) than their male counterparts (3,6kg). On average golden eagles live between 20 and 30 years. The oldest known bird reached a ripe old age of 32 years. Golden eagles are mainly predators, they hunt, but sometimes they eat dead animals, like sheep or deer, too. Their preferred preys are rabbits, hares and grouse. What the bird finally eats strongly depends on the availability of food.
Golden eagles mostly live in areas where few humans disturb them. If you want to watch them you should travel to the Scottish Highlands(Cairngorms) or the Outer Hebrides. The best seasons for spotting them are autumn and winter (outside the breeding season).