Brexit explained. Why do the British want to leave the EU?# 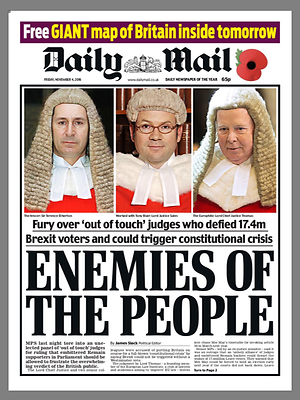 A few wealthy and powerful people, not all British, wish to end European interference with their dominion over the British people, with such inconveniences as Human Rights Laws and working time directives. They are very keen to avoid the Anti Tax Avoidance Directive which comes into effect on 1st January 2019. The Article 50 notice set the date of Britain’s withdrawal from the EU at 29 March 2019. In the withdrawal bill currently in passage through parliament, the government has attempted, but failed, to set that date in stone, so that a further Act of Parliament would be required to change it.

Leading Brexiteers own cheap newspapers such as the Express the Sun and the Daily Mail. This latter, when High Court Judges ruled that the government could not legally bypass parliament on Brexit, depicted those judges in a disgraceful front page headline, as ‘Enemies of the People’. Many readers, affected by their excessive nationalism have been persuaded that un-elected bureaucrats in Brussels and impoverished refugees and criminal migrants must be stopped.

The British people are not to blame for this. Both the nature of and relationships between the EU institutions are to some degree complex. Brexit itself is extremely complex, with new aspects appearing daily. It was an abdication of responsibility to pass the decision to the people. It is most unfortunate that as the weak government has drifted to the far right, propped up by the right wing populist DUP, what should be the main opposition party in Westminster is led by Jeremy Corbyn, whose misguided dreams of a Socialist Nirvana, also unrestrained by EU laws, lead him to support the Brexit mania.

The referendum of 23rd June 2016 was set up in a biased way, with many of the most affected not allowed a vote. Events since then have made the issues clearer. Many of the campaign lies have been exposed. As a result many have changed their view. Were the referendum held again today the result would be likely to be Remain.

The British people retain much affection for their European neighbours. Despite the confirmation bias, many realise they have been misled. That is why Theresa May’s fragile government is determined there will be no chance for the people to express their view on the government’s negotiated terms. There will be no referendum on those terms. The British people have spoken, and will not be allowed to speak again. So the answer to the question ‘Why do they want to leave the EU?’ is quite simple. They do not.