Opening of the world's longest tunnel# 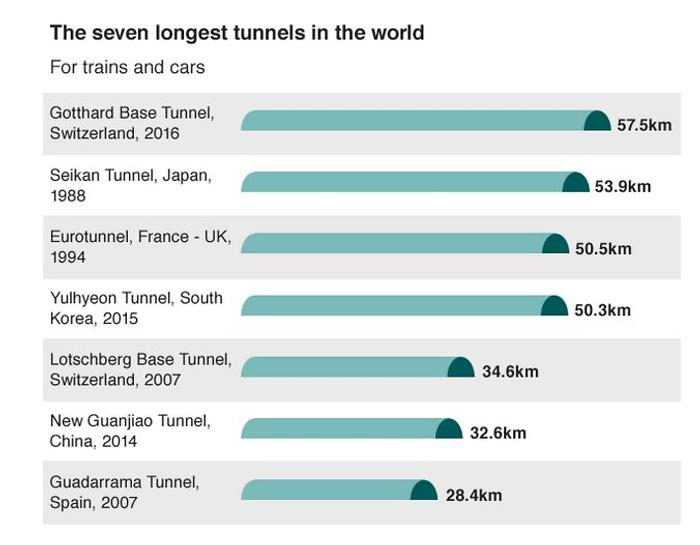 The 57km Gotthard base tunnel will provide a high-speed rail link under the Swiss Alps between northern and southern Europe. Twin tunnels running in both directions north-south should transport Europe's freight not only much more safely, but much faster.

With no danger of collision, trains will race through the tunnel at speeds of up to 250km/h

Switzerland says this will revolutionize European freight transport. Goods currently carried on the route by a million trucks a year will go by train instead.

The tunnel has overtaken Japan's 53.9km Seikan rail tunnel as the longest in the world. The 50.5km Channel Tunnel linking the UK and France is now in third place. As the picture shows, there are only 4 tunnels longer than 50 km world-wide.

Plans for a better rail tunnel have been around since the 1940s, but it was not until 1992 that Swiss voters backed their government's plan to build a new high-speed rail link through the Alps.

Two years later the project got added impetus, when Swiss voters also backed a proposal from environmental groups to move all freight travelling through Switzerland from road to rail.