A personal report by H. Maurer 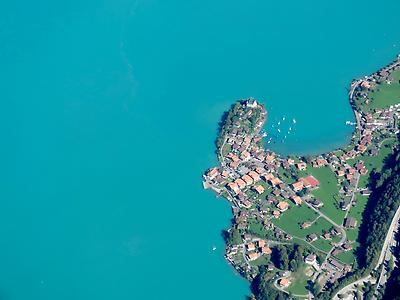 Bay of Iseltwald from the top.
Photo: PKurmannCH. from: Wikicommons, under CC BY-NC-SA 4.0 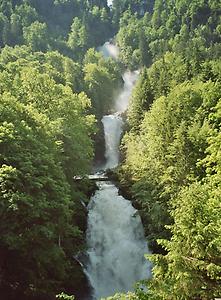 Iseltwald Iseltwald, Schweiz is one of my favorite places in Switzerland: it is an old fishing village, not easy to find, since the turn-off from the autobahn Brienz-Interlaken is just between two tunnels. Driving into the village is only allowed for locals or guests in one of the four gasthauses… but with some 400 houses where residents and Swiss people live, at least in summer, it is a substantial laid-back village, yet just 10 minutes drive from centers of tourism like Interlaken Interlaken, Schweiz or Grindelwald Grindelwald, Schweiz .

Iseltwald has a cute main gasthaus at the lake with a boat station and also has a small castle that is situated prominently on the tip of a peninsula: the village nestles in a secluded bay of the lake formed by this peninsula, with a small island adding additional romantic flavor. We stay in Bellevue, for 24 years now the elite restaurant in the area: “The restaurant with a hotel” (well, 28 beds to be exact.).

We start our "activity-day' early on a beautiful crisp May morning 2005. We hike along the lake (no road on S-side of lake Brienz !) to reach Giessbach waterfalls after less than an hour. Here it goes up for some 300 ft to the 140 year old Grand Hotel Giessbach with its turn-of-the-century charm and magnificent view.

It is connected to the wharf at the lake where the regular boats dock by the oldest funicular in the world (built 1879): it is pulled by a steel rope, and was originally powered in a simple but ingenious way by water power: one of the cars contained a tank, that was filled from the waterfall on top with a large pipe with water: as the car went down, the weight of the water pulled up the other car, the tank of course being emptied into the lake at the bottom. After a short refreshment stop, we use exactly this funicular to go to the lake and catch one of the 6 daily boats to Brienz.

Here we hurry to the Rothorn Rothorn,Schweiz railway: in about 80 minutes a small steam locomotive pushes a number of passenger cars from 600 m to 2300 (!) m along a cog-wheel narrow gauge railway line, into more and more alpine territory. An engineering feat, built in 1891 (!). At the top, there is still lots of snow, however en route there are all the spring or early summer flowers you can imagine. The views with lake Brienz, Interlaken, and the 4000 m high mountains of Jungfrau, Eiger, Mönch etc. in the back ground make an unforgettable scenery on an unforgettably beautiful sunny day.

We go down to the lake again after a short hike, taking now the boat along the lake all the way to Iseltwald, with a small snack aboard the vessel. After a short swim in the lake, we go off to the nearby Aare canyon, a spectacular 1.4 km long gorge, sometimes only 1 m (!) wide, with walls up to 180 meters!

Back to a sumptuous meal (we did not eat much for lunch to save our appetite): marinated local fish with roesti stuffed with mushrooms and a variety of sauces, a fish soup that is just superb (with pieces of fish and fish dumplings), followed by fillet of local fish on a delicate sauce, and strawberries with black pepper… a bit of white wine goes well with this.

After dinner (it stays light here till around 10 pm in summer) we still visit the 15 km distant posh Interlaken, with the Victoria Hotel Jungfrau as one of the highlights (the smaller suites are some 1000 dollars a night, the bigger ones you have to ask for quotes). A drink on the terrace with the Jungfrau glowing in the sinking sun makes it clear why this place was so famous. Finally, a nightcap of good red wine at the lakeside….

Actually, it is worth to consider the history of this region of Switzerland: tourism started here for the very rich around 1850. In 1900 they would typically take a train or horse carriage from Bern (capital of Switzerland) to Thun, board a vessel to get to the other end of the lake, with transport waiting for them to the Grand Hotel in Interlaken that I have mentioned.

Interlaken is already located on lake Brienz (just some 10 kilometers from lake Thun; Interlaken does mean of course ‘between the lakes’).

Now they would spend a few days here to explore the beautiful lake, and nearby mountains, with cable cars and such partially available already at this time! They would possible got to one of the fancy hotels in Grindelwald. Or maybe even visit the “Kleines Scheidegg”, the famous place where the Eiger North-face looms. This is considered the most difficult and long climb in Europe (1750 meters of almost vertical wall ending at around 3970 m altitude!).

The climb takes 2- 4 days, with nights spent in the vertical wall, sleeping some way (I honestly do not know how), roped to petons.

The rich would not climb, certainly not that rock-face! Indeed, the first ascent of the Eiger North face itself was only accomplished in 1938 by A. Heckmair and L. Vörg from Germany and H. Harrer und F. Kasparek from Austria on the four days July 21- 24! The first winter ascent was done only 1981! The Eiger North face has claimed some 50 lives over the years!

Pictures of Iseltwald, Rothorn and vicinity