Nansen and the Fram#

Fridtjof Nansen (1861 –1930) was a Norwegian scientist, diplomat, humanitarian and Nobel Prize winner. He led the team that made the first crossing of Greenland in 1888. However, he became particularly famous for his North pole expedition 1893–1896 and his later efforts as humanitarian and diplomat.

Nansen saw in his research evidence that there was a drift of ice apparently moving East to West passing the North pole. It was his idea to build a ship, the Fram (the Norwegian word for "forward"), that would not be crushed when frozen into the ice, but lifted up by the ice by using a rounded hull. He was hoping that this way he could use the drift, carrying his Fram to or close to the North pole. Nansen picked an experienced crew of only 12, as second in command Otto Sverdrup who had already been on Nansen's crossing of Greenland. 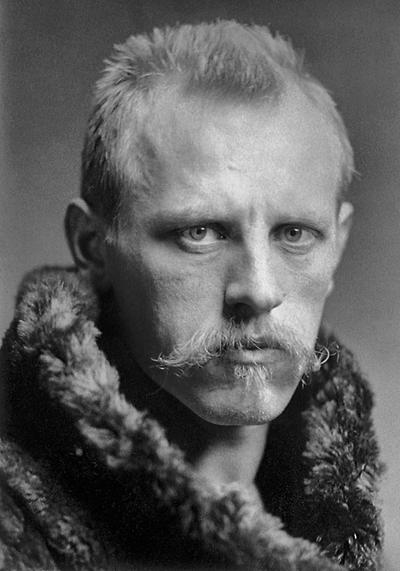 Fridtjof Nansen, 1897. Photo: Public Domain
The Fram left Christiania (as Oslo Oslo was called then) on 24 June 1893, cheered on by thousands of well-wishers. The most northerly point of the Eurasian continental mass was passed in September. Soon Nansen followed the line of the pack ice northwards to a position recorded as 78°49′N, 132°53′E, before ordering engines stopped and the rudder raised. From this point Fram's drift began. The drift was slow. The 80° mark was finally passed on March 22, 1894. It became clear that the drift would be too slow and not passing over the pole, so Nansen decided to reach the pole together with one companion by dog sledge when reaching a point far enough North. The plan was that when the ship passed latitude 83° he and Hjalmar Johansen would leave the ship with the dogs and make for the pole while the Fram, under Sverdrup, would continue its drift until it emerged from the ice in the North Atlantic. After reaching the pole, Nansen and Johansen would make for the nearest known land, then cross to Spitzbergen where they would find a ship to take them home.

On March 14, 1895 with the ship's position at 84°4′N, Nansen and Johansen began their journey. Nansen had allowed 50 days to cover the 660 km to the pole. However, uneven surfaces made skiing more difficult, and their speeds slowed. On April 7, after making camp and observing that the way ahead was "a veritable chaos of ice-blocks stretching as far as the horizon", Nansen decided to turn south. He recorded the latitude of the final northerly camp as 86°13.6′N, almost three degrees beyond the previous Farthest North mark. On 13 April they suffered a serious setback when both of their chronometers stopped. Without knowing the correct time, it was impossible for them to calculate their longitude and thus navigate their way accurately to the nearest land, Franz Josef Land. They did manage to continue on an ice floe and finally sighted land presuming correctly that this was Franz Joseph Land. On August 6 they shot the last of their dogs: they had been killing the weakest regularly since April 24, to feed the others. They then lashed their two kayaks together, raised a sail and made for the land, and moved further South. Towards the end of August, as the weather grew colder and travel became increasingly difficult, Nansen decided to camp for the winter. In a sheltered cove the two explorers erected a hut which was to be their home for the next eight months. With good supplies of bear, walrus and seal their principal enemy was not hunger but inactivity and temperature.

There is the famous story that they got so fed up by sleeping in one sleeping bag together that for Xmas 1895 they converted their double sleeping bag into two. After a terribly cold night they reunited the two sleeping bags into one: the body-heat of the other person was necessary to keep warm.

It was May 1896 before they were able to resume their journey on kayaks. A walrus that damaged their kayak seemed to be a final blow, but as they tried to repair the kayaks a miracle happened: they heard dogs barking and voices. It was the British explorer Frederick Jackson who was leading an expedition to Franz Josef Land and was camped nearby. He took Nansen and Johansen to a camp to recuperate.

The homeward voyage to Christiania was a series of triumphant receptions at every port. On September 9, Fram was escorted into Christiania's harbour and welcomed by the largest crowds the city had ever seen, celebrating the healthy return of all 12 expedition members, and both parties return almost at the same time after 4 years – very close to a true miracle!

During the 20 years following his return from the Arctic, Nansen devoted most of his energies to scientific work, but more and more also turning to politics to assure Norways independence. In the final decade of his life, Nansen devoted himself primarily to the League of Nations following his appointment in 1921 as the League's High Commissioner for Refugees. In 1922 he was awarded the Nobel Peace Prize for his work on behalf of the displaced victims of wars.