Every day in the evening a ship of the shipping company of Hurtigruten leaves the harbour of Bergen Bergen, Norwegen on a cruise across the polar circle to the northernmost point of Europe and finally on to Kirkenes Kirkenes, Norwegen at the Russian border, before retracing its route back south. Along this twelve day tour the ship covers a distance of 2.500 nautical miles (approximately 4.630 kilometres), stops in 34 harbours and crosses over 100 fjords.

Since the middle of the 17th century local fishermen were officially charged with delivering mail from Trondheim Trondheim, Norwegen to the fortress Vardøhus Vardohus, Vardø, Norwegen in the Finnmark two times per year. In 1804 a route was established by three teams of eight oarsmen to connect Trondheim to Alta. Every three weeks the first team rowed from Trondheim to Bodø Bodø, Norwegen , the second team from Bodø to Tromsø Tromsø, Norwegen and the last one from Tromsø to Alta Alta, Norwegen . The mail service was taken over by steamers in the middle of the 19th century.
The Norwegian state initiated the regular ship tours between the north and south by offering financial support. Richard With founded the so-called "Vesterålens Dampskipsselskap" in 1881. In the following years he mapped and charted Norway's coastal waters thereby providing proof that the route is navigable. On July 2nd 1893 the experienced captain Richard With of Tromsø started on the first Hurtigruten tour from Trondheim to Hammerfest Hammerfest, Norwegen with his ship DS Vesteraalen. Hurtigruten, which means "the fast route", was established as a regular cargo-ship and postal service route. The trip was enlarged in 1898 with the connection of Bergen in the south. Sixteen years later the today northern turning point, Kirkenes at the Barents Sea, was added. 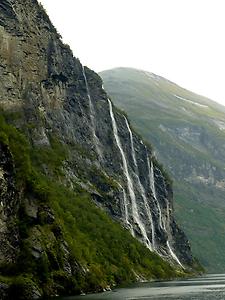 Seven Sisters Waterfall, 2012
Photo: H. Maurer
Since 1893 the ships run in a daily scheduled service, operated by Hurtigruten Group ASA. In the 120 years since the founding, eight shipping companies were operating companies.


Norway's coastal areas are mainly free of ice in winter, thanks to the Gulf Stream. Therefore it is hardly surprising that ships were in former times often the only means of transportation and the backbone of traffic in ice-locked Norway. Far into the 20th century inland areas were seldom connected by streets or railways, and if, in rare cases, they were connected, they were often not passable in winter. The only reliable alternative were ships, as the captains guided their ships through winter storms into safe harbours.
Until 2001 Hurtigruten was subsidized by the state to guarantee the supply of the population in the northern parts of Norway with goods and mail, to prevent depopulation. Since then the airplane gained significance and became the major cargo transportation at least in summer. In winter Hurtigruten is still subsidized by the state. Nowadays the luxurious ships are mostly used by cruise ship tourists as a relaxed way to see Norway. For most Norwegians Hutigruten ships are ferries like every other, to get from one harbour to the next. 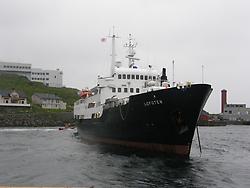 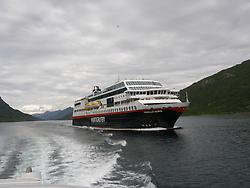 MS Trollfjord on the way to the Trollfjord
© Elisabeth Ertl
There are three different ship generations to choose from. The oldest ones are the traditional ships (MS Lofoten and MS Vesterålen), built between 1964 and 1983. Of these two only the MS Vesterålen has the capacity for the transportation of cars. Altogether they are not as luxurious as the newer ships, but they spread a certain charm and have a more familiar atmosphere as they are smaller. Next are the ships built in the 1990ies (MS Nordnorge, MS Polarlys, MS Nordlys, MS Kong Harald, MS Richard With and MS Nordkapp) with capacities of up to 740 passengers. Lastly, the ships of the so-called millennium generation (MS Midnatsol, MS Finnmarken and MS Trollfjord) built in 2002 and 2003. They are the most modern ones with capacities of up to 1.000 passengers. MS Fram is the youngest ship of the fleet and does not run the regular service as it is an explorer ship built for travelling to the Arctic (Greenland and Spitsbergen) and Antarctica.

Touring along the Norwegian coast with Hurtigruten offers the possibility to see some UNESCO world heritage sites, like the stave church of Urnes Stabkirche Urnes, Ornes, Norwegen , the Hanseviertel of Bryggen Bryggen, Bergen, Norwegen in Bergen, the spectacular Geirangerfjord Geirangerfjord, Stranda, Norwegen or the archipelago of Vega Vega, Norwegen .

Honnigsvåg
© Elisabeth Ertl
Other highlights are for example Ålesund Ålesund, Norwegen , the famous city of Art Nouveau, the historical metropolis Trondheim, the grandiose landscape and archipelago of the Lofoten and Vesterålen and Tromsø, often termed the gate to the Arctic. For many tourists a visit to the North Cape Nordkapphallen, Nordkapp, Norwegen is a fixture. Who can say that you have stood at the northernmost point of Europe and that only the sea separated you from the North Pole? Never mind that the northernmost point is not the North Cape, but a less spectacular headland to the west (which is not accessible by a road) and that some islands, called Spitsbergen, are between you and the magical North Pole. Still, you feel like a daring explorer braving the wild, untamed North. 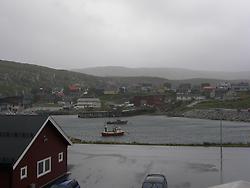 Kjøllefjord
© Elisabeth Ertl
What makes a cruise with Hurtigruten special? For one, you see much more than on a big cruise ship, as you go along the coast, often travelling into small fjords and stopping in small Harbours and fishing towns. You can arrange your individual tour by stopping in one harbour for a few days and travel along with the next ship going in the right direction, or you can leave the ship only to board it in another harbour.
Local foodstuffs and delicacies are served in the restaurant according the season, for example in spring while travelling from Ålesund to Molde Molde, Norwegen you are served a salted leg of lamb from Hellesylt Hellesylt, Norwegen . Cheese from the Lofoten is served while cruising between these islands, King Crab in Kirkenes or cloudberries from Northern Norway between Tromsø and Skjervoy Skjervøya, Skjervøy, Norwegen . You can get a real taste of Norway!
Every season has its own charm. If you travel in summer you can see the entire Norwegian coast in daylight as the sun does not set, or if you prefer the cold you can travel in winter when the sun hardly rises above the horizon and Northern lights dance over the sky. 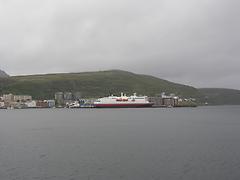 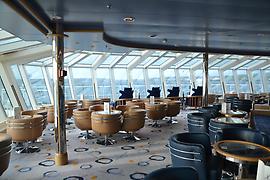 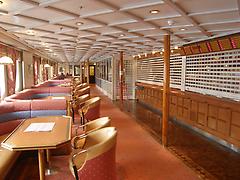 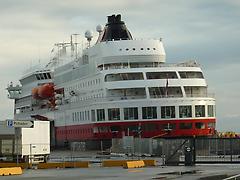