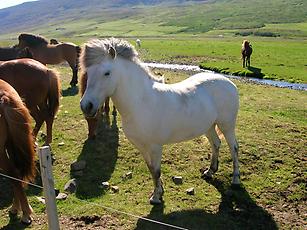 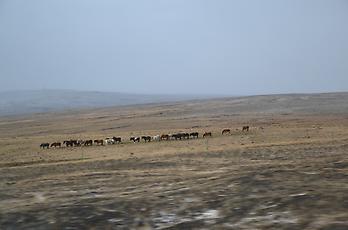 Approximately 80.000 Iceland horses live in Iceland, while about 55.000 live in mainland Europe, England and the USA. Iceland horses are horses even though they are quite small, so never offend an Icelander by telling him that the "ponies" are cute, they are small horses (they have a height of over 135m at the shoulder)! Most people do not know that Iceland horses are probably the purest breed in the world, as there is a strict embargo on imports. If an Icelandic rider likes to participate in an international tournament abroad he has to leave his/her horse after the event as it can not return to the island. This quite dampens the enthusiasm and raises costs (remember you have to buy or train a new horse after every tournament!). The highlight of the tournament season is the biannual Landsmót, a tournament, exhibition, rider fair and festival. In 2000 it was held in Reykjavík for the first time.

Pre-Christian beliefs worshiped the horse as a godly animal. There is an ancient Icelandic poem telling about Skinfaxi, a horse delivering the morning by laying his mane of sunbeams over the land. His counterpart is called Hrimfaxi, a stallion with a mane of hoarfrost, bringing the night. In the morning his labours can be seen in the dew collected in the valleys, which is the froth fallen from his bit.

The history of the Iceland horse is strongly intertwined with the history of the first settlers. At the time of the first settlement of the island by the Vikings in 874 AD, the small, sturdy Germanic ponies, which the Vikings brought with them, were the only reliably means of transportation and beasts of burden. From raids on the coast of Ireland and Scotland the Vikings brought back horses of Celtic origin, which were lighter and nobler. These two stocks are the foundation of the Iceland horse which is pure bred since 1.000 years, although there are still varieties discernible in the different breeding lines. Conquerors probably would have failed without horses, furthermore it was a status symbol and a food source.

Stallions are known for their temperament. Until the 16th century regular stallion fights took place in Iceland. Severe injuries were the exception as the horses were separated beforehand. Since the middle of the 19th century Iceland horses were imported to Europe, especially to England as the horses were used in coal mines. They were forced to pull the coal trucks in the low tunnels because of their small built and robustness. In 1930 this special horse breed was part of the expedition to Greenland of the German scientist Alfred Wegener. Since 1950 Iceland horses are imported to Germany, where they soon gained a big number of enthusiasts.

A typical Iceland horse has a noble head with lively eyes, short ears and a long mane with a dense tuft (the symbol of Iceland horses). Oftentimes the glorious, silken mane is formed as a double mane hanging on both sides of the neck. All coat colours are represented, the most common ones are sorrel, brown ones and black horses, followed by white horses. Every contrivable natural hue is possible, as well as, due to breeding efforts, bicoloured and three-coloured dappled horses and dark horses with light coloured mane and tail.

Iceland horses are perfect horses for hobby riders as the horses are spirited, even-tempered, enduring, hard working, sure-footed and bold. They excel especially during cross-country and long distance rides as distances between 40 and 50km are no problem for a trained Iceland horse.

The climate of Iceland is harsh and the pastures are meagre, an altogether inhospitable environment, which forced Iceland horses to adept. For centuries horses had to fend for themselves, without the aid of humans resulting in an undemanding species. High fertility as well as a high resistibility helped them to recover after natural disasters, like after the volcanic eruption in 1783 which destroyed entire herds and reduced the population from 35.000 horses to about 8.400.

In Iceland horses grow up in free and loose herds. At the age of four to five they are broken in, which is quite late for a horse, but Iceland horses are long-lived and can be ridden without restrictions at age 20 or 25. Often they are either ridden in summer or winter and for the rest of the year remain in the stable or on the pasture. 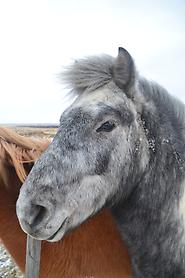 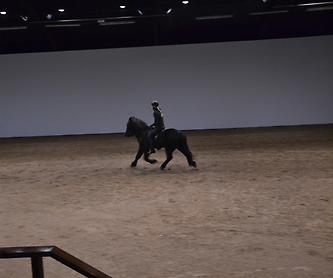 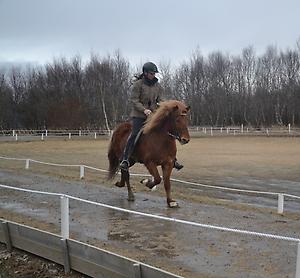 Most often the goal of a breeding program is to achieve an able-bodied horse with a balanced temperament and good gaits. Iceland horses are special insofar as they have five gaits in comparison to the typical three ones of other breeds, namely walk, trot and canter/gallop, which are the three traditional ones and tölt and pace, the two special ones. The sequence of the steps of a horse in tölt and walk are the same, the difference is that during walk a horse steps down alternately with two and three feet simultaneously, while during tölt alternately one and two feet touch the ground. Both front and hind foot of one side, either left or right, move at the same time in pace.

While driving through Iceland's stark winter landscape it is easy to discover the direction the wind is coming from as long as Iceland horses are around, as they tend to stick their posterior into the wind, sometimes even forming long strings of horses. If you ask an Icelander why the horses have such a nice and friendly temperament while many thoroughbred horses are high-strung, you probably get an answer like: If a horse does not behave itself it gets eaten. That is no idle threat, as horse meat is eaten in Iceland. Why bother with a horse that kicks and bites if you have many other friendly ones? So, grumpy horses do not get the chance to breed, they end up in the stockpot.