Churches and Towers in Mani #

Text and all pictures by Peter Diem, 2016

Mani (griechisch Μάνη) is an area in the southern part of the Greek peninsula Peloponnes, to be more exact it is its „middle finger". Mani extends form south of the city of Kalamata Kalamata to the tip of the middle finger (Cape Tenaro, often also called Cape Matapan). The main city of Mani is Areópoli Areaopoli . Mani is dived into three parts: the outer Mani (Éxo Mani) north of Areópoli that is largely located in the northwestern prefecture of Messenia, the inner Mani (Méssa Mani) south of Areópoli on the western side, and the eastern Mani (Kato Mani) with the main center Gythio Gythio . The people in Mani are proud that they were never conquered, not even by the Turks. In some houses the flag of Mani (in white a blue Greek Cross) is shown. Mani is famous for its small old churches, often located quite in isolation, and for the towers used as houses, proof of bitter rivalries between different clans. 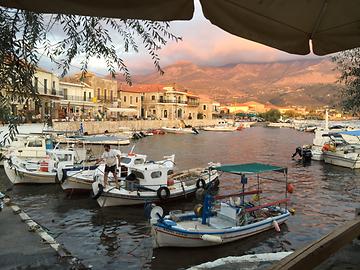 The small harbour of Agios Nikolaos 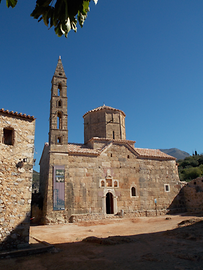 The church of Kardamili 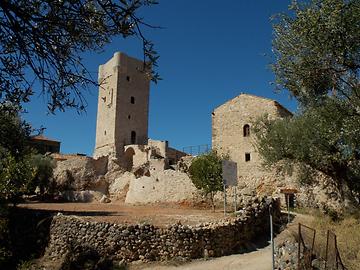 The restored old part of Kardamili 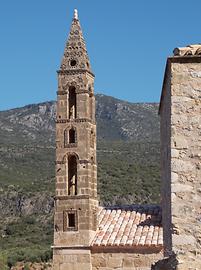 The interesting tower of the church
Kardamili is already mentioned in Homer’s Ilias. During the Turkish occupation of Greece Kardamili was able to retain some independence due to its remote location. Many Byzantine people took refuge here. The Mourtzinoi family erected a defensive tower, thus protecting the village and providing a safe haven for its inhabitants. Preceding and during the war of independence Kardamili was an important hiding und meeting place for the freedom fighters. Kolokotronis and his man left from here August 22, 1821 to free Kalamata. 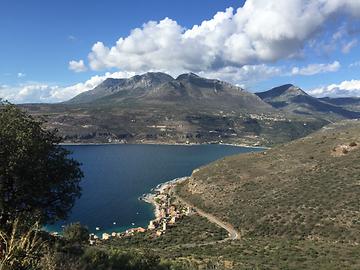 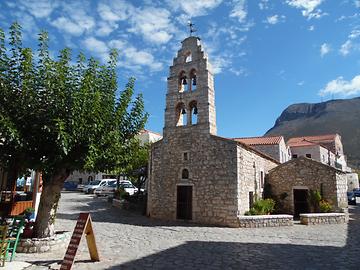 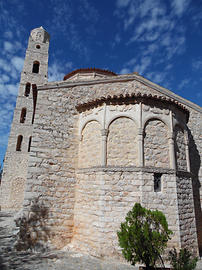 The church of the archangel Michael 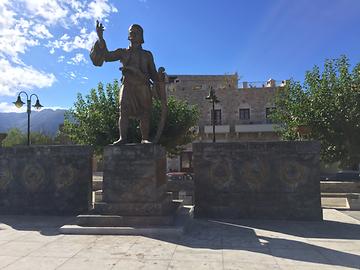 Petros Mayromichalis, a hero of freedom 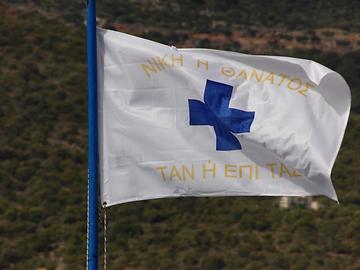 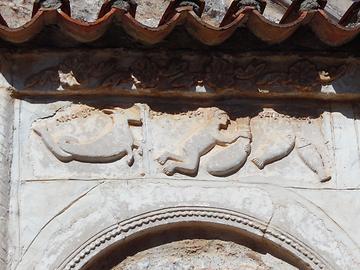 Zodiac signs on the choir
The name „Arestown“ was given to Areópoli probably to honor the god of war, Ares. For Petros Mayromichalis (1765-1848) a freedom fighter whose mighty family lived for centuries on Mani a monument was erected in the market square. He was the one who raised the Mani flag (with blue cross and the words ΝΙΚΗ Ή ΘΑΝΑΤΟΣ – victory or death) as starting signal for the war for freedom. 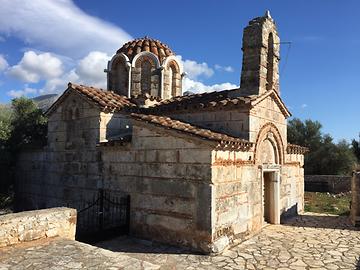 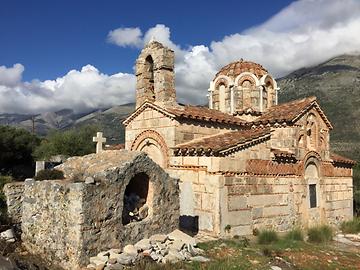 St. Barbara church in Erimos
The church of Saint Barbara in Erimos is a particularly beautifully proportioned cross-cupola church with narthex. At the lower part of the big gray ashlars (cuboids) some blocks of marble are inserted with great care. This is empahsized by narrow bricks that add life to the walls. Further up there is an enchanting frieze made of square bricks set on on one an apex. This is extended by garlands of diagonally placed bricks. The window openings are closed with marbels containing reliefs, and the windwo arches show intricate ornamental bricks. It is truly hard to believe: Roof and cupola of this superb byzantine church have never been covered by bricks yet are still in excellent condition. 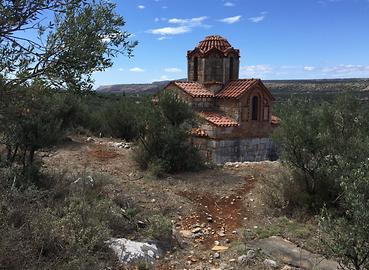 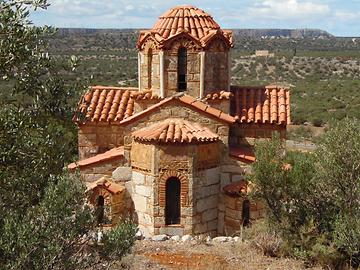 Between two paved roads before Kitta there is the church of the Saints Sergios and Bakchos. Locally it is called Tourloti meaning something like “The one with the cupola”. The church as no narthex (i.e. no covered entrance that is usually not considered part of the church proper) and is not exceptionally big or elegantly proportioned like Hagia Varvära- the church that was almost simultaneously built in Erimos in the 12th century but the construction of the walls belongs to the most remarkable ones in Mani. Similar to the Hagia Varvàra a special combination of stone, bricks and marble is used on the outside, decorative bands made of diagonally placed burnt clay plates are used. Even windows and window-arches are similar to what was mentioned before. However, in the lower part marble slabs are placed in a fashion that created the appearance of T-shaped crosses. Looked at this from afar it is an impressive view, yet looked at it close-up it seems to beautify the rather solid brick constructions above.

The interior shows marble beams and sculptured capitals on all four columns that support the cupola. As far as frescoes are concerned, few have survived, but there is an interesting version of the last supper showing Johann sitting upright rather than leaning towards Jesus as is usual. This is an archaich feature of iconography of a time when such representations had already disappeared form the byzantine rules of religious paintings, and is here preserved by as stubborn painter. 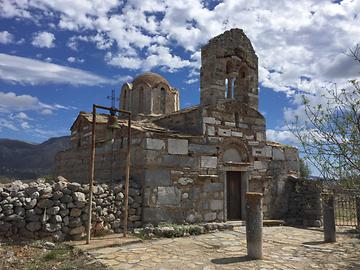 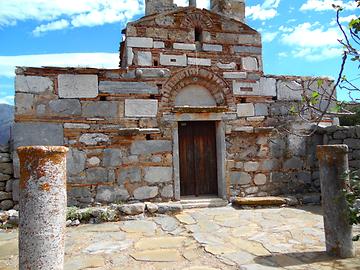 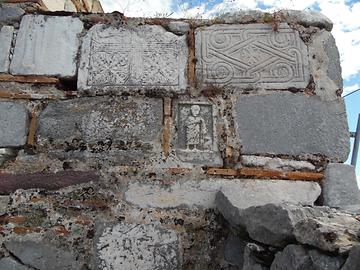 The spolia on the church in Keria

Keria is a tiny village between Ochià and Koùnos. To find it, using often ungraded roads is not easy. However, the church is a beautiful example of the complex cross-cupola church with four major columns as was tradition in the 13th century. The church deserves special attention not because of its basic shape but because of amazing marble spolias and reliefs on the walls. It is likely that these are actually Roman or Byzantine remains. The former show in an architectural analogy the adaptability of Christian religion to and incorporation of heathen beliefs. One can also find beautifully done plates with intricate patterns and cross and flower motives, clearly coming from iconostasis’ of early churches. In the upper right part a small relief shows a man with his dog. 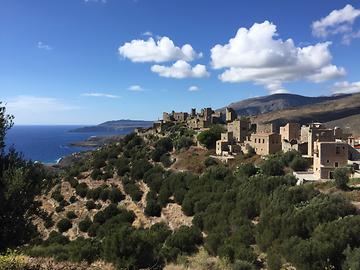 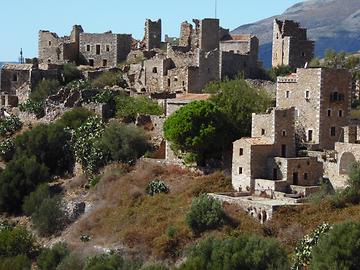 The original Vathis was located in a gorge northeast of the modern (current) village. It is first mentioned in 1571 and was inhabited by pirates. Twenty families lived there in 1618. In the late 18 the century and at the beginning of the Greek war for freedom, family feuds reduced population a lot. The now existing village was built between 184o and the 20th century. At the beginning of the 20th century the village lost its importance. Thus, it now consist of only a few towers used for living. They are concentrated at the end of a rocky outcrop not far from the gulf of Messenia. Due to its unique architectural value the village has been under monument protection since 1967. Some unique ensembles of buildings, towers, oil-mills and other structures have been restored, and hae been partially converted into small hotels or B&B places.