Everything has one end only the sausage has two#

"Wurst" plays a strong part in German cuisine and proverbs, as it is a very serious topic with many possibilities for social missteps and embarrassments. The German term "Wurst" not only translates as sausage, but also includes products that fall under the charcuterie category, like ham and salami. Germany is one of the market leaders regarding the consumption and production of sausages, with an estimate of about 1.500 different kinds of them. Celebrities like Johann Wolfgang von Goethe, Martin Luther or Frederick the Great were great admirers of this speciality. Often sausages are made up of pork which is filled into animal guts, but also beef, veal or poultry are used. Unlike in other countries the dilution with dairy products or eggs is prohibited, except in some special, regional products like the "Pfälzer Saumagen". 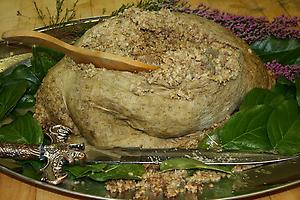 One of the oldest foodstuffs is the sausage, as it offered the possibility to extend the storage life of meat while gaining the most benefit of slaughtered animals as some parts could be used which otherwise would have been discarded. The origin of the word "Wurst" means turning, spinning, rolling or mixing something.

Sausages feature in 5.000 year old paintings and drawings in Egypt, China and Syria. In the ancient world, or even earlier, something akin to modern sausages was probably produced like haggis or the so-called "Saumagen". Chinese references mention sausages around the year 589 B.C. in which lamb and goat meat were used. In Homers odyssey Greek warriors took something resembling sausages (guts filled with blood) with them when they went to war, to curry favour with the gods. In all likelihood it is a myth, but it is true that antique Greek and Romans knew how to produce them. Romans were known for their reputation as sausage enthusiasts, Roman cuisine ranging from small sausages as appetisers to whole roasted pigs stuffed with sausages.

First mentions of sausages can be traced back to the 11th or 12th century. In medieval times butchers first appeared who worked for innkeepers, refining production processes and competing for the production of the biggest or longest bratwurst. There were in fact decrees issued by aldermen regarding the production and the content of the sausages. 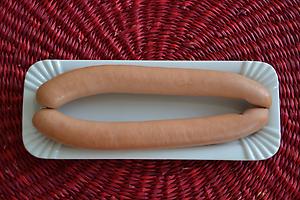 Boiled sausages have by far the highest variety (approximately 800 different types). Raw, shredded pork, veal or beef, together with spices and ice, is processed to sausage meat in the so-called cutter and later on filled into gut and boiled in 70-75°C hot water. Examples are the wiener ("Wiener Wurst") or the Bavarian veal sausage ("Weißwurst").

Salami
Photo: André Karwath aka Aka under CC taken from Wikipedia

Liver sausage
Photo: Lvova under CC taken from Wikipedia
In comparison to boiled sausages, raw sausages, the second most numerous type (500), are suspended in cooled rooms for ripening after being filled into the gut. Raw sausages are made to last by salting, drying and curing. Popular examples are the chorizo, cabanossi and salami.

Last but not least, boiled sausages consist of pre-boiled or cooked meat, entrails, bacon, fresh liver and blood. The name derives from the fact that they are again cooked after being filled into the gut, like black pudding or liver sausage, only two of about 350 different kinds. 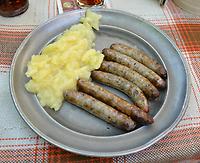 Sometimes a fourth type of sausage is distinguished, the bratwurst. Its production resembles that of the boiled sausages, as the bratwurst contains fresh, raw pork, but in contrast to it, it is fried in the pan or on the grill. The origins are found among the Celts, spreading to Rome and later on to Germany. In the German city of Nuremberg the first documented evidence dates back to 1313. At the turning of the 19th century the Bratwurst boomed, since heavy machines for processing became available, thanks to the industrialisation, and conserved sausages in cans could be exported worldwide.

Currywurst
© Elisabeth Ertl
Germans take their foodstuff very serious indeed as they dedicated an entire museum solely to the currywurst, a very popular fast food in Germany which essentially is a dish of sausage with curry sauce often served with bread, rolls or chips. The museum was opened in 2009, 60 years after the invention of the currywurst in Berlin Mitte. Approximately 350.000 visitors every year follow the "sauce trail" through the history of the currywurst. Every sense is demanded as you get to known and experience the speciality by sight, smell and sound.

There are some paradoxical sayings concerning "Wurst", for example: If you say "Das ist mir wurst" ("It's sausage to me") it means that it's all the same to me and that I don't really care, it's not important. But if you say "Es geht um die Wurst" ("It's all about the sausage") it means that it is very important, like winning the world championship or the Oscar. So you see the meaning of proverbs can be at cross purposes while talking about sausages.

A very colourful, German proverb describing the word sulking is "playing the offended liver pâte" ("die beleidigte Leberwurst spielen"). In medieval times it was commonly believed that certain parts of the body house feelings and emotions, like the heart which is made responsible for love or the liver where anger and fury are located. Evidently some proverbs are based on this belief as the expression "jemanden ist eine Laus über die Leber gelaufen" ("a louse has walked over someone's liver") implies, meaning that someone is very grumpy indeed.

If you get an "Extrawurst" ("extra sausage"), you are very lucky as you get special treatment. Do try to avoid looking like a "Presswurst" ("brawn") by not buying or wearing too tight clothes, as you look like you were pressed into them. So you see, you can be named or compared to many types of sausage even if you never realised it or thought it possible! Probably the most fundamental and intellectual sausage wisdom can be found in the saying "Alles hat ein Ende nur die Wurst hat zwei" ("everything has one end only the sausage has two"), which in principle means that everything has to come to an end.