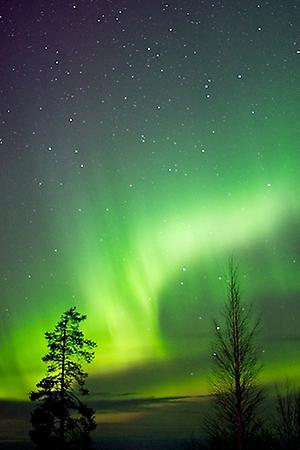 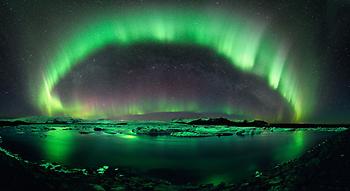 Polar lights are a light source and phenomenon of Polar Regions in the far North and South. The term polar light is sometimes used interchangeably with northern lights, called Aurora borealis, which is not accurate as there are also southern lights, called Aurora australis. Southern lights are viewed by fewer people than their northern counterparts as there are fewer people living in areas where they can be seen. Not many people live, for example, in Antarctica in winter. Strong northern lights also can be seen in the southern parts of New Zealand and during maximum auroral activity even as far north as Australia, South Africa and the southern parts of Argentina and Chile, although solar storms causing southern lights in these areas are few.

In Europe northern lights are typically seen in Scandinavia, Iceland, Greenland and Spitsbergen. In southern latitudes they can be glimpsed averagely three times in a decade, where they were often assumed to be harbingers of disasters like famine or war and were even mentioned in Greek mythology. For middle Europe the long-time average, good conditions provided, is three times per year.

Solar wind is transmitted by the sun. While most of it is "lost" in space, some particles reach the upper parts of the atmosphere in the Polar Regions. These particles collide with atoms and molecules which in turn absorb a part of the solar particle's energy thereby becoming excited (which means that the energy of the atom is higher than the baseline energy state). Excited atoms tend to return to their normal energy state (baseline energy state) by emitting photons (light particles). The emitted light particles can be seen on earth as polar lights.

Emitted radiation of the sun is not constant, it follows an activity cycle, called Solar cycle Variations, of about eleven years. Some say that the northern lights follow the same cycle as more solar winds and storms mean more polar lights. Others state that the maximum of auroral activity lags behind the activity maximum of the sun. 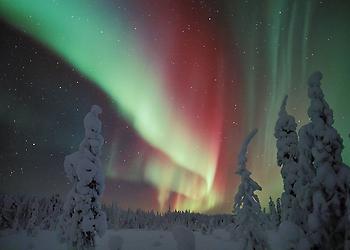 Northern Lights in Snowy Forest in Finland
Photo: Finnish Tourist Board under CC taken from Wikipedia

The colour of the northern lights depends on the gas the solar particles collide with, but also on the prevailing light. Most commonly seen with the naked eye is a greenish-yellow polar light, caused by the collision with oxygen atoms in an altitude of 100 to 200km. The influence of the light becomes apparent when the sunlight reaches the higher regions of the aurora during twilight and lends it a bizarre blue colour. On the other hand moonlight might result in beautiful purple and pink lights.

In lower layers of the atmosphere (80-90km height) a short-lived magenta colouring at the lower edge of the polar light veils appears. During periods of strong auroral activity polar lights can appear reddish because of the collision of oxygen atoms in 300-400km altitude. Nitrogen molecules blaze in blue and violet in altitudes between 200 and 700km, although most of the wavelengths are in the ultraviolet spectra and therefore invisible for human eyes and most amateur cameras.

Combination colours can occur if the emitted flashes appear simultaneously. 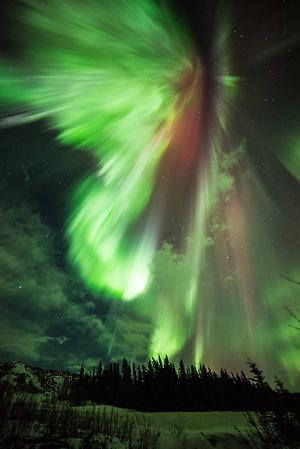 Aureole in Alaska
Photo:Sebastian Saarloos taken from NASA
Polar lights can also be categorized by their variegated shapes. The first one is a steady, softly luminescent yellow-green polar light arch, which especially occurs in northern Lapland and Iceland. If the activity level is higher, auroras appear in ribbons forming bows, spirals, waves, veils, rays and curtains which are especially impressive. Probably the most awe-inspiring form is the so called aureole, a magnificent polar light vertically above the spectator.

Finns call them "Revontulet", which translates as "fox fire". According to a very old legend, northern lights occur when a fox runs over the Fjäll and dragging his tail over the snow emits sparks. Less poetic legends claim that the northern lights are the blood of the dead riding and playing in the heavenly death domain. Or that they are flash and thunder thrown by the god of thunder, Thor, on Väinämöinen, the hero of the Finnish national epic Kalevala. 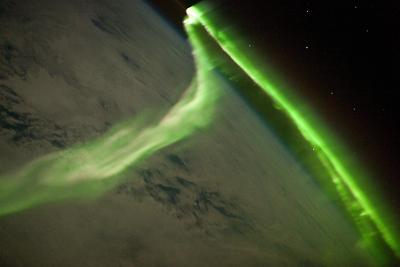 Polar lights can generally be viewed only in late autumn, winter and early spring as the sun outshines the much weaker aurora and never sets in summer in high latitudes. They also occur during day, but then they are invisible. During favourable conditions they can be seen all night long. If they are faint, as often happens in the second part of the night, it is very difficult to distinguish them from the backdrop of the sky or from clouds. There are certain ways to make sure that it is in fact a polar light, like taking a picture with a good camera. If it is still white on the photo it is probably a cloud, but if it shines in a nice, healthy green you have caught an aurora. Also fast movements can indicate a polar light especially if it is undulating.

Moonlight as well as a high humidity cause stray light which can dampen the colour or visibility of polar lights. Therefore it is very important to locate the best spot for watching the show, like outside of towns during nights of the new moon. Especially strong events can brighten the landscape like under a full moon.

It is still not possible to predict if and when polar lights occur, so it is still a matter of luck, you either get lucky and see them or you won't. If you are very unfortunate and you don't see them try not be discouraged and try again, it is certainly worthwhile.