More than 3 years Sarajevo survived the siege. Have a look at the movie clip or read the story below.

The first mention of Sarajevo can be found in historical sources from 1435. Citizens of different nationalities and religions have lived here for centuries. Sarajevo is the only city in Europe where mosques, Eastern Orthodox and Roman Catholic churches and synagogues stand so close to each other that call for prayers echo through the city together.

The modern history of the city was marked by the 1984 Winter Olympic Games, when Sarajevo had an opportunity to show its authentic and unique hospitality.

The siege of Sarajevo started on 4 April 1992 and it continued for 1425 days. Units of the former Yugoslav National Army and Serb extremists' paramilitary forces surrounded the city and launched an unprecedented campaign of terror against its 500,000 residents. Water and power supplies were cut and gas supply was reduced. The city started to run out of food. The aggressor fired at the city from all the weapons in its arsenal. Snipers located at the surrounding hills fired mercilessly at pedestrians crossing street intersections.

In June 1992, the United Nations assumed control over the Sarajevo Airport. Instead of terminating the siege immediately, they spent their time counting the shells fired on the city and delivering humanitarian aid under the principle: half to the aggressor, half to the victim.

This is the story about how the residents of Sarajevo survived these horrific times and defended their city.

The Historical Museum of Bosnia and Herzegovina treasures the objects produced and used during the siege. Virtual models of these objects and their stories revive the atmosphere of struggling to survive in a besieged city. 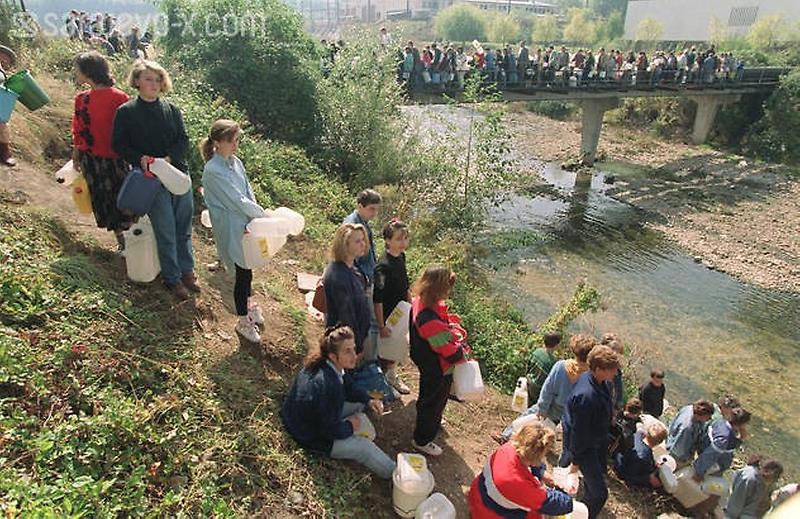 One of the greatest problems the residents of Sarajevo had to resolve was the shortage of water. The aggressor assumed control over the largest supply source, the Bačevo water plant near Ilidža. Fortunately, Sarajevo had numerous wells and springs – and one of the largest was underneath the Sarajevo Brewery, in the Old Town. People went there day after day, collecting water and facing death. Water queues were one of the constant targets of enemy fire.

The complete interruption of regular power supply left the city in total darkness. At the beginning of the siege, each household had a supply of candles. But the candles lasted a few months, as did the stocks in shops. Alternative solutions had to be found.

During the first few months of the siege, the city used its food reserves. Residents hoped that the siege would not last long, as they believed that the civilised world would not allow it to continue. Months went by and the world watched the agony of Sarajevo in total silence. Hunger loomed. 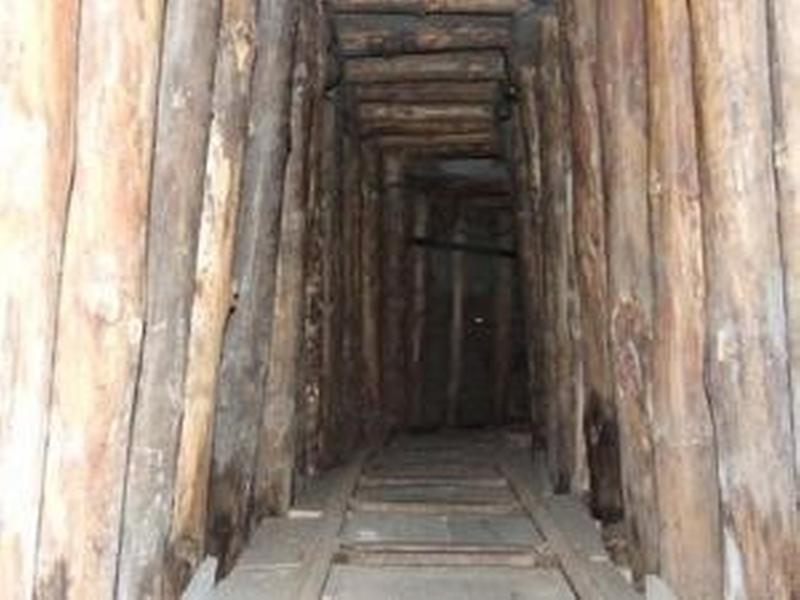 Tunnel in Sarajevo
In 1993, the authorities of the Republic of Bosnia and Herzegovina decided to launch the construction of a tunnel under the runway of the Sarajevo Airport. The tunnel was to allow communication between the city and the free territory. The construction was completed in June 1993. The Sarajevo 'tunnel of life' was 800 m long and the height varied between 150 and 180 cm. Now the city could receive some food, weapons and medical supplies. A single line allowed occasional power supply of hospitals and other priority facilities.

Each household received a monthly ration of humanitarian aid. It usually comprised of wheat flour, rice, pasta, and cans of suspicious content. The most famous of them was ICAR corned beef, rejected even by stray dogs in the city. Still, women devised ways of preparing interesting and tasty meals using these meagre ingredients.

The limited quantities of food available in Sarajevo had to be prepared somehow, with no water, no power or any other source of heat. The residents designed various improvised stoves and cookers, using mostly firewood, but often anything else that can be called flammable.

Winters in Sarajevo can be bitterly cold, with temperatures dropping town to -20 degrees centigrade. An improvised stove was hardly sufficient for keeping warm rooms that had no windowpanes – all were broken at the very beginning of the war. Most of the windows in Sarajevo were covered by plastic sheets supplied through humanitarian aid, displaying a large UNHCR logo.

The Sarajevo Tobacco Factory operated throughout the siege. As there was very little money, most of the trade was based on exchange, and cigarettes were one of the most valuable commodities. At the beginning of the siege, many people received their salaries in cigarettes.

After a while, the Factory ran out of packaging material and cigarettes were wrapped in all kinds of paper, usually already printed. Smokers could thus enjoy a cigarette and read an interesting paragraph from a newspaper or a book. It was interesting that many non-smokers started to smoke during the siege.

Some 11,000 people were killed in Sarajevo during the siege. 1,500 were children. The enemy fired from all types of weaponry and there were casualties literally every day. The most horrific massacres were caused by shells fired at crowds of people in the market place, in a water queue and in a bread queue. Groups of people were the favourite targets, and this included funerals.

The first major massacre in Sarajevo happened on 27 May 1992, when the aggressor fired several mortar rounds on a group of people queuing for bread. 19 residents of Sarajevo were killed and 157 were injured. The images of horror travelled across the world but the world did not react.

Massacres happened one after another. A massacre in the Markthalle outdoor market on 5 February 1994 left 68 dead and 144 injured. Serb general Stanislav Galić is serving a life sentence, convicted by the International Criminal Tribunal in The Hague, for this and other crimes.

The second Markthalle massacre happened on 28 August 1995 – 37 people were killed and 90 injured. This massacre triggered the long-awaited NATO intervention against Serb military positions.

Throughout the war, hospitals were packed with injured patients. The medical staff worked in incredible conditions, with no water, power or medical supplies. They are a special kind of heroes of the war in Sarajevo.

From the onset of the siege, the aggressor launched fierce attacks and tried to enter the city over and over. The residents presented heroic resistance. No theoretician of war has been able to explain this kind of defence against attacks by a superior, well-armed military force.

The response by the international community was to impose an arms embargo, mainly affecting those who were defending Bosnia and Herzegovina. And this is something that Bosnians will have a hard time to forgive the world for.

The residents organised their own defence. Existing weapons, mainly pistols and rifles, were collected across the city. Improvised weapons and ammunition factories were set up. The Army of Bosnia and Herzegovina was thus formed.

Sarajevo was under threat from a total information blockade. It was very important for the citizens to hear the news, as they kept hoping that the terror would stop. Despite the impossible working conditions, the Radio and TV Service of Bosnia and Herzegovina never stopped its programmes. The residents were dependent on FM radio, as that also meant the lowest power consumption.

For a long time, the only communications line with the outside world was a satellite phone, left behind by an international organisation as it fled the besieged city.

Despite the lack of absolutely everything, life went on. Improvisation became part of everyone's everyday life. Hospitals, radio and TV and other priority facilities had generators, adapted to run on natural gas, which appeared in the pipes from time to time. Gas was also used for heating and cooking.

Improvised installations that brought gas into individual households were incredible. All kinds of garden hoses could be seen along staircases, bringing gas to burners in tailor-made stoves. Considering the quality of the improvised gas installations, or rather the lack thereof, very few people were injured in gas explosions.

Despite the daily terror and life-threading situations, the residents of Sarajevo never succumbed to despair. A magnificent spirit of resistance could be felt throughout the city. Everyone wanted to give their own contribution to the defence. Those who were not in the Army went to work and did their best to make it seem like a very ordinary activity, as if there were no war at all.

Foreigners visiting Sarajevo at the time were impressed by the style and elegance of the girls and women they met in the streets. It was their way of fighting back.

The besieged city maintained an active public life and cultural scene. Plays were staged, concerts organised, and the Sarajevo Film Festival, currently one of the most important festivals in the region, was first organised in 1995. Numerous sports events were held, as well as the Miss Sarajevo Under Siege beauty pageant. 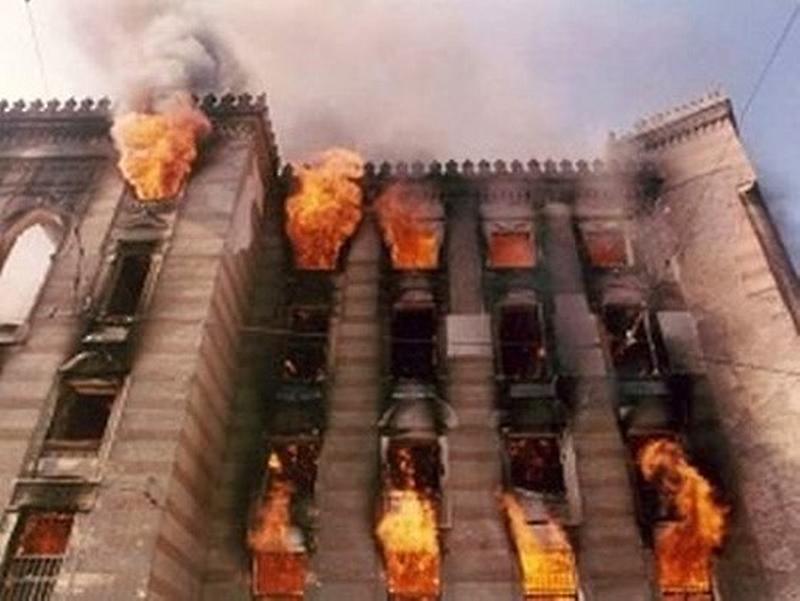 The city hall with 75% of its library was destroyed

The siege of Sarajevo continued for 1425 days. It was the longest siege in modern history. In addition to horrific casualties, the city also suffered enormous damages in physical destruction or devastation of numerous buildings and institutions. The Town Hall, a masterpiece of pseudo-Moorish style, was burned to the ground, along with books of the National Library of BiH it had hosted.

All the Olympic sports facilities were destroyed, the cable car, numerous office buildings and hosing blocks.

Still, nothing could destroy the spirit of resistance of the Sarajevans. Bosnia and Herzegovina was defended. The war ended with the signing of the Dayton Peace Agreement in November 1995.

The state was divided into two entities, one of which was given to the aggressor.

This is not as situation that can last for ever, one part of the government almost always blocking wishes of the other (and conversely). Both sides harbour many bad feelings against each other. Many attrocities committed by the former Yugoslaw and Serbian dominated army have led to the condemnation of leading politicians and officers as war criminals in de Hague. However, attrocities have not been one sided.

The light on the horizon is that despite a dire economical and poltical situation life has returned to a modicum of normalcy and tourists are again enjoying the beauty of Bosnia and Herzegowina. One can only hope that the deep wounds (that are also reflected in some of the statements in above essay) are going to heal as much as it as happended to the town hall, shown burning above and restored below. Hence this picture of the reconstructed old city hall with all its beauty is a fitting conclusion for a dark part of history that hopefully can be forgotten by all concernced at some stage. 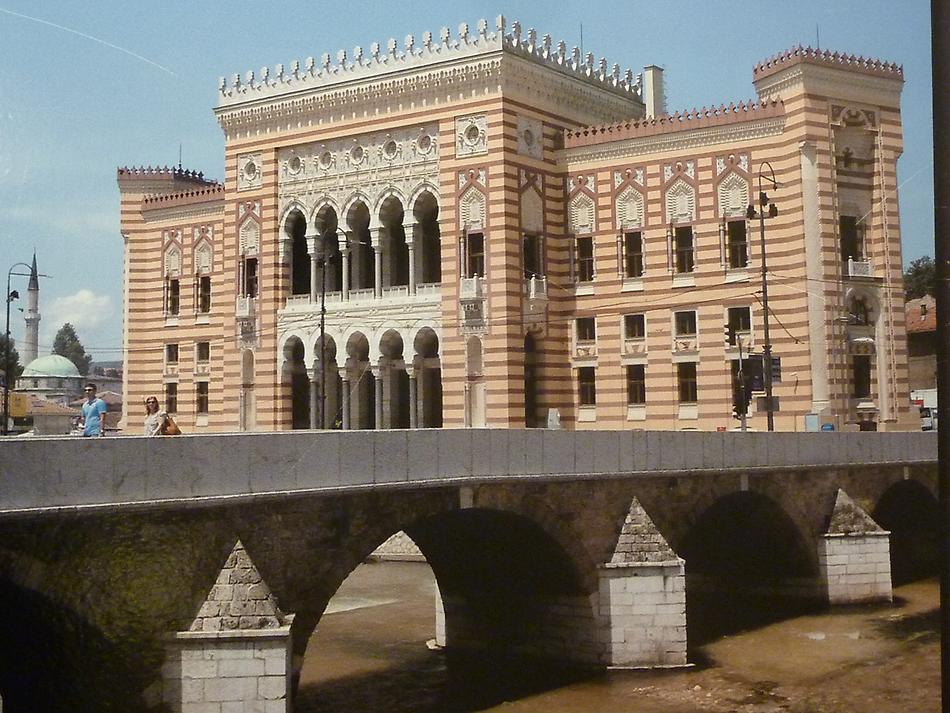 Picture from an exhibition in the reconstructed city hall with explicit permission of the curator of the museum, Photo: H. Maurer, February 2015