Berat city Berat with fewer than 40.000 inhabitants is ranked only 9 th in size in Albania: Tirana Tirana with almost 900.000 is by far the largest city, but the port-city Durrës Durrës has also more than 200.000, and Vlorë Vlorë , Elbasan Elbasan and Shkodër Shkodër have more than 100.000 inhabitants.

Despite its moderate size, Berat is often considered the oldest continuously inhabited city in Albania, since in the 6 th century the place was already mentioned as a Greek city. (Earlier smaller settlements date back to 2.600 BC). In 200 BC it was captured by the Romans who razed the walls and massacred the male population of the city. The town became part of the unstable frontier of the Byzantine Empire following the fall of the Roman Empire later, and suffered from repeated invasions by Slavs. During the Roman and early Byzantine period, the city was known as Pulcheriopolis.

The First Bulgarian Empire under Presian I captured the town in the 9th century, and the city received the Slavic name Beligrad ("White City"), Belegrada in Greek, which persisted throughout the medieval period, changing to Berat under Ottoman rule (firmly establised in 1417). During the early period of Ottoman rule, Berat fell into severe decline but by the 18th century, Berat developed into of the most important Albanian cities during this period. In the 19th century, Berat played an important part in the Albanian national revival.

The old part of the town called Magalem district has been UNESCO heritage site since 1985, and the whole area was declared museum city by UNESCO in 2008. Magalem, together with the assembly of old stone houses of Gorica on the other (left hand) side of the big river Osum which enters a deep gorge just a bit downstream, and the castle (Kalajas, the castle hill) make the city one of the most impressive places in Albania.

According to an Albanian legend, the Tomorr mountain with the castle was originally a giant, who fought with another giant over a young woman. They killed each other and the girl drowned in her tears, which then became the Osum river. 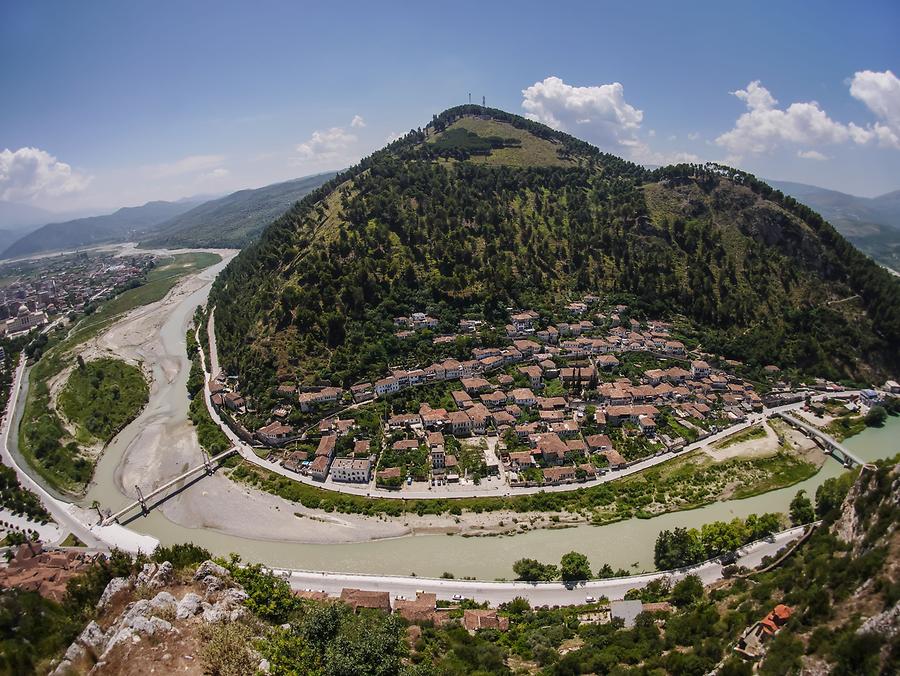 Panoramic view of part of Berat. Foto: my_cottage, October 2016, from Wikicommons, under CC BY-SA 2.0
Above panoramic picture shows Gorica on the left side of the river Osum. The picture is taken from the castle hill. The bridge on the far right is a famous old construction, the one on the left a recent pedestrian bridge. In the middle of the left edge one can see part of the modern city with a building that looks like a government building. However, it is a private university, see larger picture below! 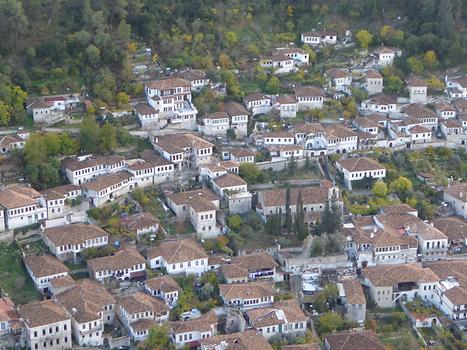 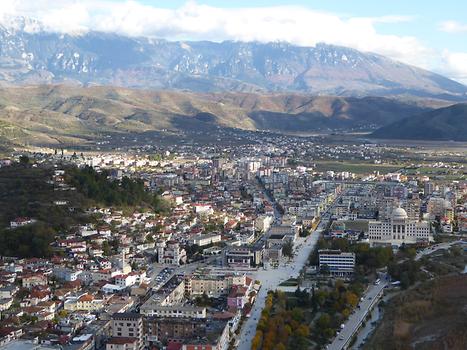 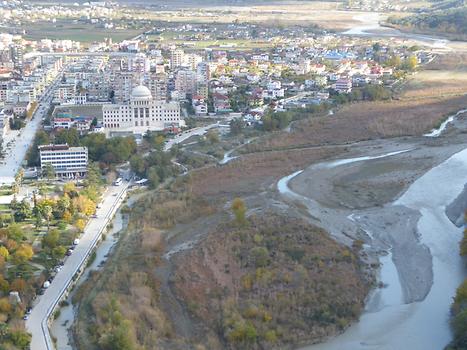 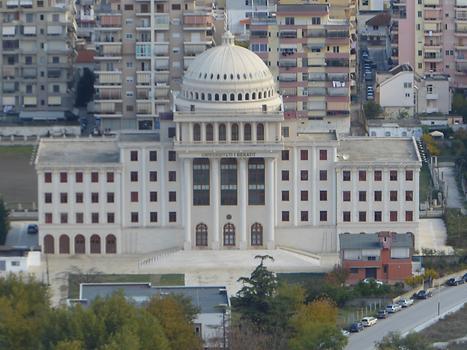 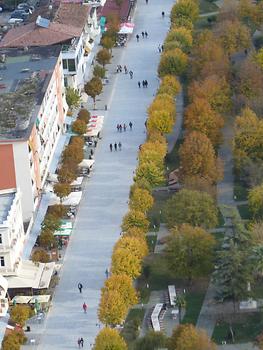 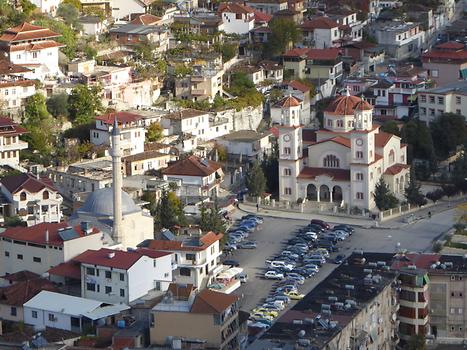 Berat- Mosque and church peacefully side by side. Foto: H. Maurer, 2017

We now turn to the old district of Magalem on the right side of the river, just below the castle. 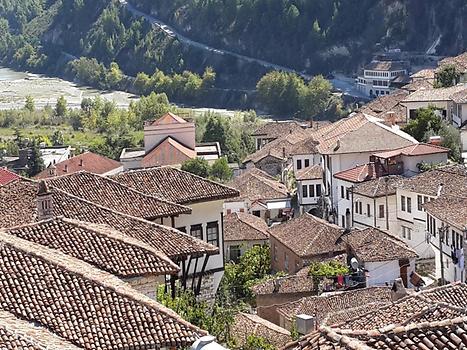 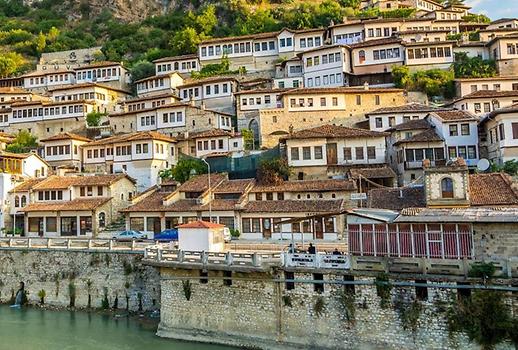 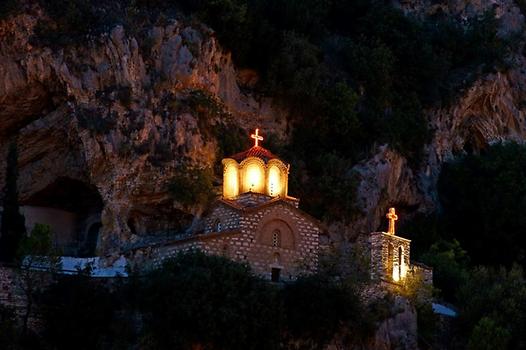 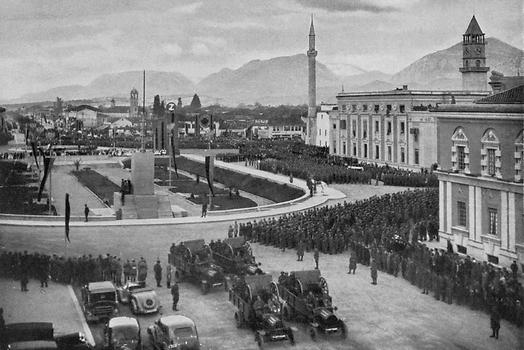 For completeness sake: This is in Tirana {GoogleMap location=
And now we visit the castle. 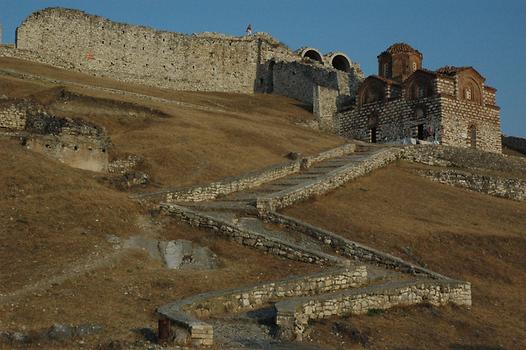 One of the entrances to the castle with the 13 th century Byzantine Holy Trinity church. Foto: Jason Rogers, 2007. From Wikicommons, under CC BY 2.0 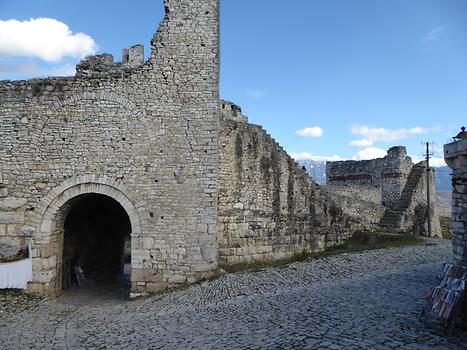 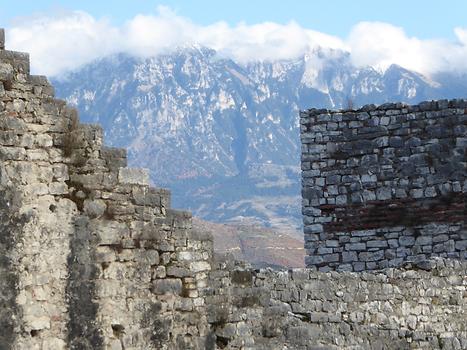 In one of the roads of the castle. A number of families still live in the stone houses inside the castle-walls. Foto: H. Maurer, 2017 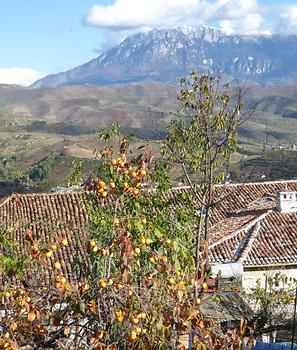 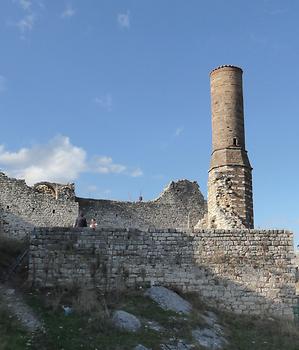 In the fortification. Remainder of a mosque. Foto: H. Maurer, 2017 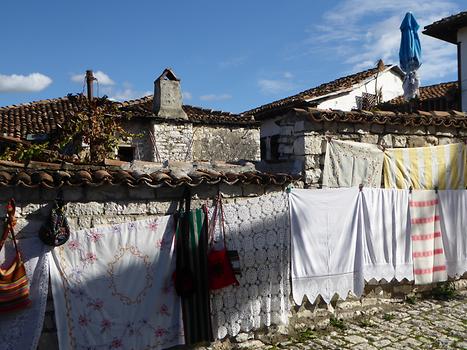 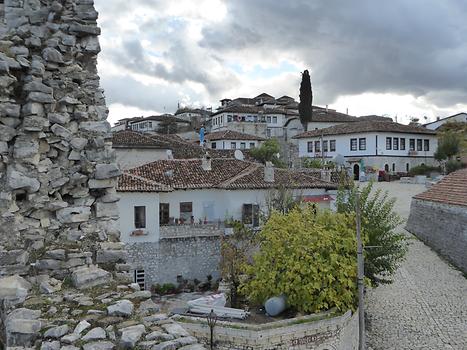 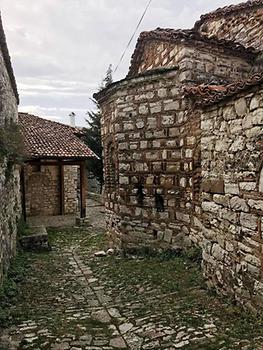 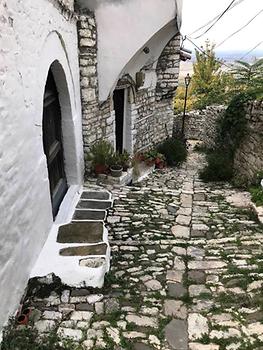 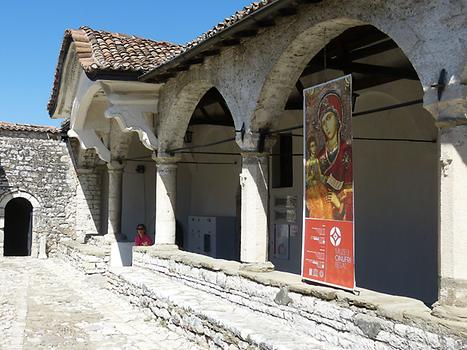 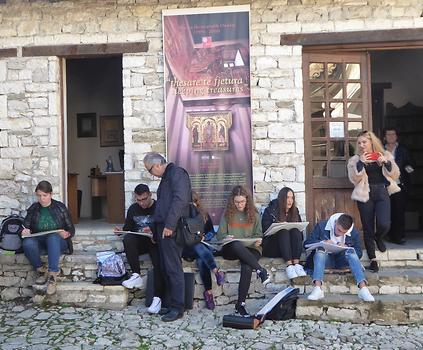 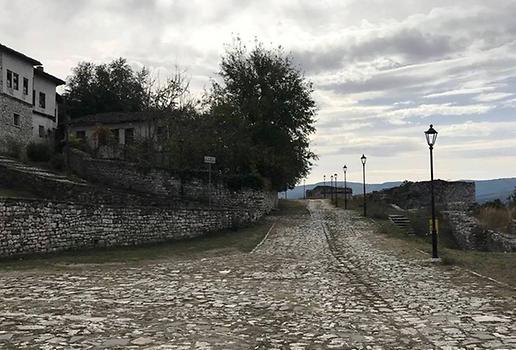 In the fortification. Archive: Petraq Papajorgji
Let us conclude this pictorial report with a short videoclip that shows a few highlights of Berat. BeratVideo.mp4