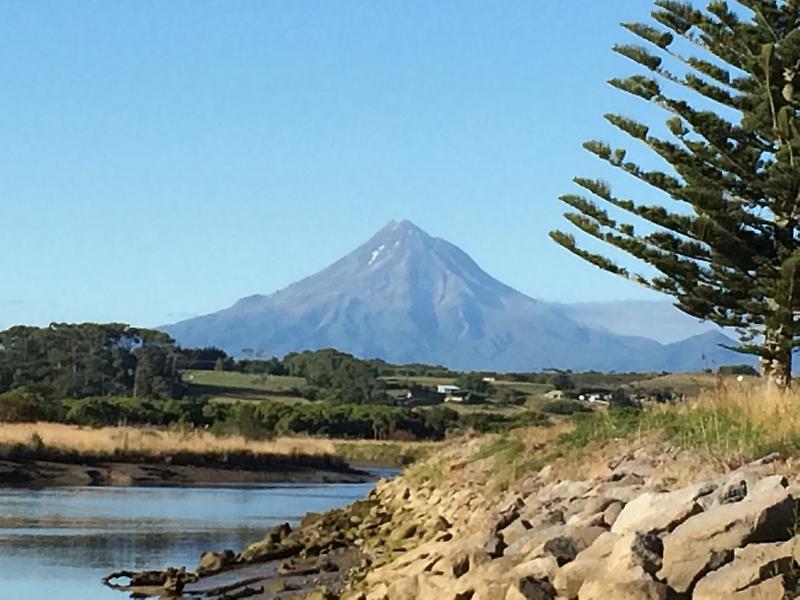 The 2518-metre-high mountain is one of the most symmetrical volcanic cones in the world.

There is a secondary cone, Fanthams Peak (Māori: Panitahi), 1,966 metres on the south side. The second official name (now shown on most maps) is Mount Taranaki that comes from Māori and means "shining mountain".

In 1881, a circular area with a radius of six miles (9.6 km) from the summit was protected as a Forest Reserve. Areas encompassing the older volcanic remnants of Pouakai and Kaitake were later added to the reserve.

In 1900 this was declared "Egmont National Park" as second national park (after Uruwera, see map) in New Zealand.

According to Māori mythology, Taranaki once resided in the middle of the North Island, with all the other New Zealand volcanoes. The beautiful Pihanga was coveted by all the mountains, and a great battle broke out between them.

Tongariro eventually won, inflicted great wounds on the side of Taranaki, and causing him to flee.

Taranaki headed westwards, following "the Rock of Rahotu" and forming the deep gorges of the Whanganui River, paused for a while, creating the depression that formed the Te Ngaere swamp, then heading north. Further progress was blocked by the Pouakai ranges. As the sun rose Taranaki became petrified in his current location.