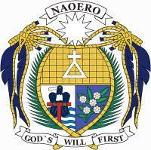 The exact origins of the Nauruans are unclear since their language does not resemble any other in the Pacific region. Germany annexed the island in 1888. A German-British consortium began mining the island's phosphate deposits early in the 20th century. Australian forces occupied Nauru in World War I; it subsequently became a League of Nations mandate. After the Second World War - and a brutal occupation by Japan - Nauru became a UN trust territory. It achieved independence in 1968 and joined the UN in 1999 as the world's smallest independent republic.