Come with me on a tour of discovery into an infrequently visited and almost unpopulated region of the eastern part of Australia’s Gibson Desert. Our trek takes us some 250km from south to north through splendid sand plains interspersed by sand dunes, among the rather pretty desert oaks, and past impressive mountain ranges.#

WARNING: Do not travel in this region without experience and meticulous preparation and planning – you need suitable vehicle and equipment – there is danger to the life of yourself and co-travellers. 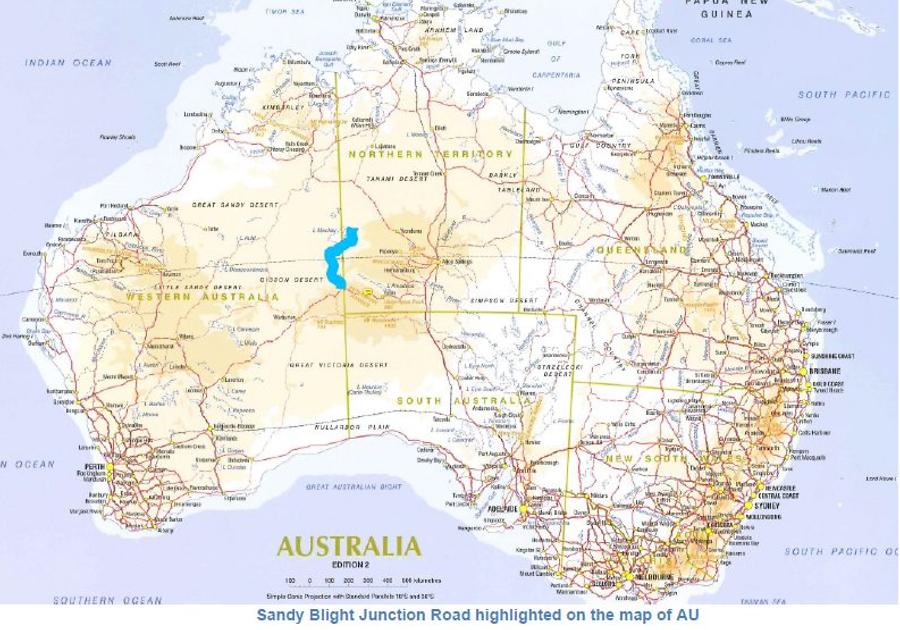 In 1960 as part of the Woomera Rocket Range project, surveyor Len Beadell and his Gunbarrel Road Construction Party (GRCP) pushed through a track, from near Docker River in the south, up to Kintore in the north. He named the circa 250km winding track the “Sandy Blight Junction Road” after an eye condition which afflicted him during the survey. A hallmark of his work is the series of informative plaques he placed at points of interest for ‘future travellers’.

LenBeadell plaque - affixed to a blaze on a Desert Oak
Foto: H. Dreher
As Len Beadell was conducting the original survey in this hot and arid part of Central Australia, he was delighted to discover permanent water now known as Bungabiddy Rockhole. He was weary and thirsty at the time, so one can well imagine his delight at its discovery. The rockhole is at the foot of a narrow gorge in the Walter James Range and is almost permanently shaded, meaning that its water is cool and not subject to much evaporation, and hence permanent despite infrequent and minimal rainfall. 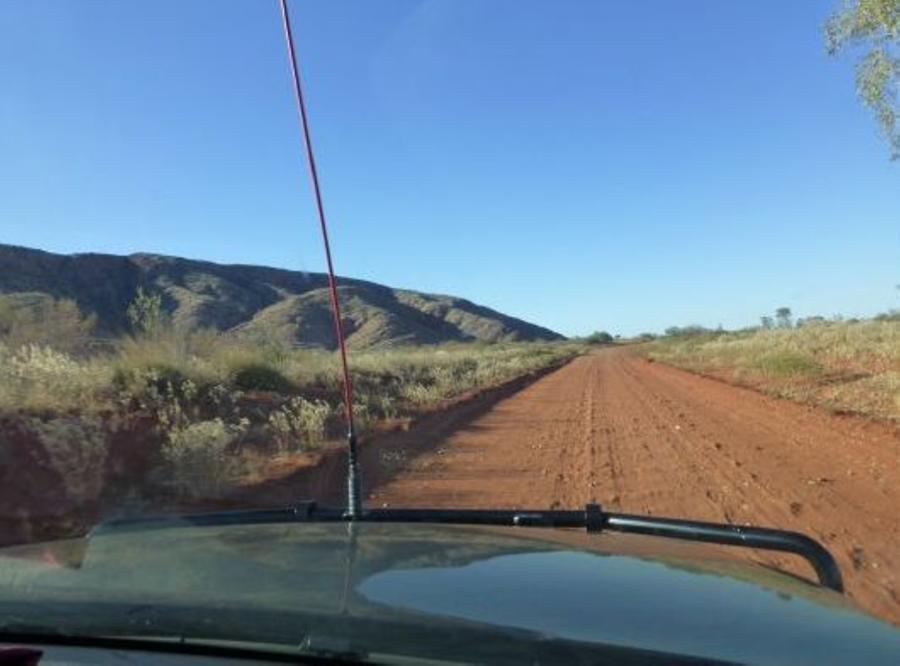 The Walter James Range - Len Beadell reasoned there must be rockholes and hence water
Foto: Heinz Dreher
The permanent pool of water is located at the foot of a steep and rocky gully, inaccessible except from the valley where an intermittent stream directs the overflow in times of the heavy but infrequent rainshowers.

Inspection of the rainfall graph for Giles, just 60km south west of Bungabiddy Rockhole, reveals there is not much precipitation, so any that does fall and accumulates in gullies and rockholes is most welcome for the intrepid traveller, and the flora and fauna, in this remote region. 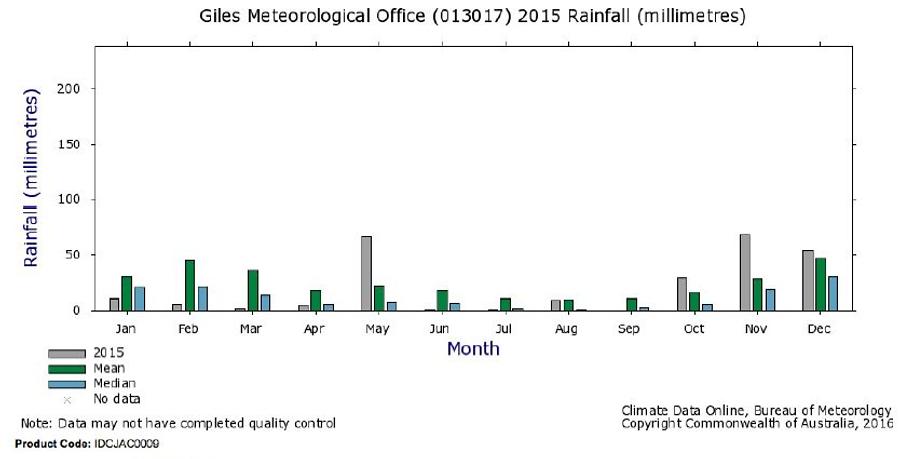 In the graph, Giles rainfall data for 2015 (leftmost column) is compared to the mean for all years (middle column) and median for all years (rightmost column). Giles Weather Station was opened on 1st August 1956. During 2015 there were just 34 days out of the entire 365 days on which any rain was recorded and just 10 or so days on which the daily rainfall exceeded 4mm. The varying water levels can be seen on the rock walls of the main pool at Bungabiddy. 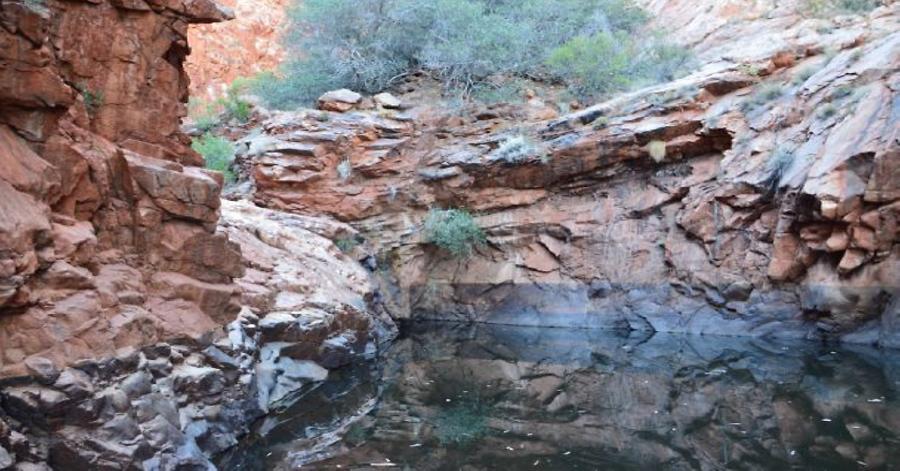 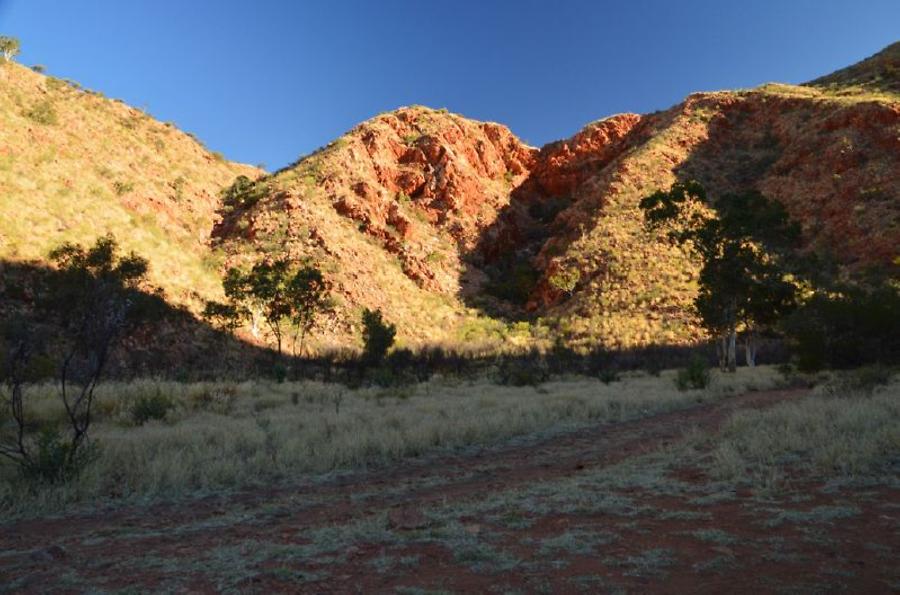 The valley entrance to Bungabiddy Rockhole
Foto: Heinz Dreher
Camping in this amphitheater-like setting is rather special as the high rock walls of the gorge provide a shield from all but a north-east wind. Sunrise is also delayed due to the steep hills, and sunset is much earlier than for the surrounding area. Being so remote, it is very likely that you will be the only visitor to the area – except for the dingoes, whose eerie howls in the dead of night can make one’s skin prickle! But for the modern explorer with the capacity to take all needs (almost) that one desires, it makes for a most pleasant camp. 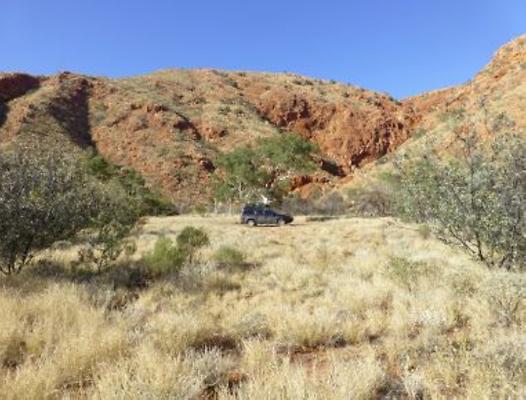 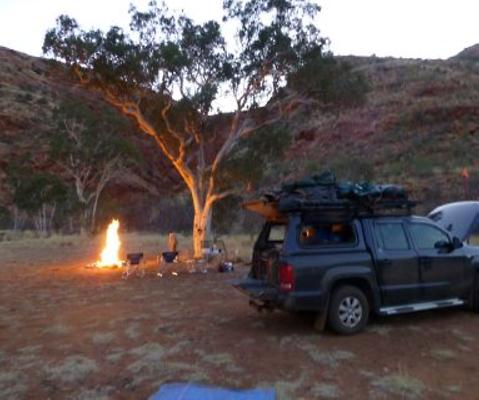 Campfire at Bungabiddy Rockhole (only during low fire periods)
Foto: Heinz Dreher
Australia’s desert regions are rarely devoid of vegetation, and a magnificent tree found in abundance in these parts is the Desert Oak (Allocasuarina decaisneana) 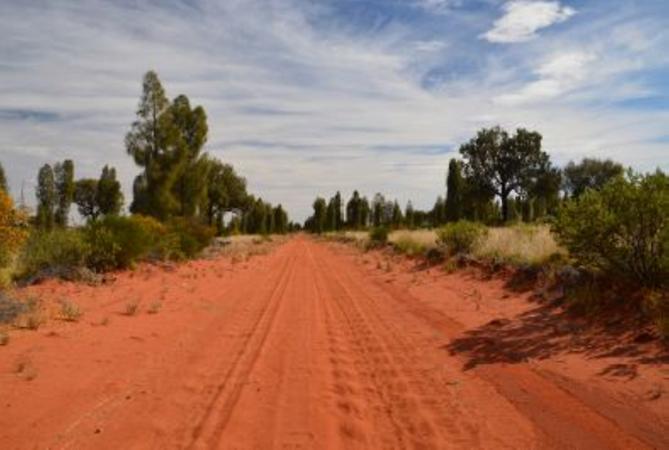 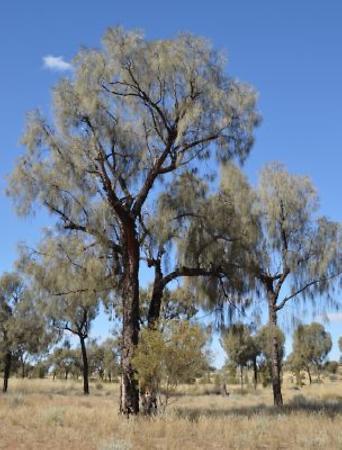 A magnificent mature Desert Oak (Allocasuarina decaisneana)
Foto: Heinz Dreher
And with the wide and open spaces, here as elsewhere in the desert regions, the sunsets can be a veritable joy to experience whilst having dinner in between the time when the flies have found their sleeping quarters and the mosquitoes are looking for you to feast on. 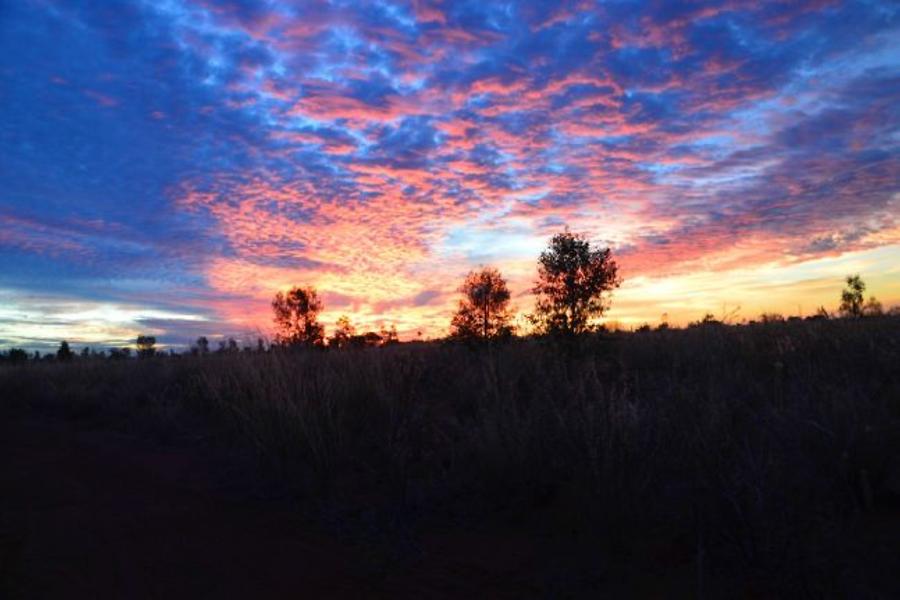 Sunset along the Sandy Blight Junction Road
Foto: Heinz Dreher
An oft-mentioned query one receives from moderately interested potential travellers is: “What is there out there? Why do you go to so much effort and expense to be there? One reason is that I don’t like queues – waiting in line for things to happen. However, it appears queues are such a natural part of life even out here, where the closest aggregation of people are to be found some 10km up in the sky flying from hither to thither in the jet aircraft, the camels force waiting in line while they assess your credentials, and then most reluctantly, and leisurely clear the track for your passing. 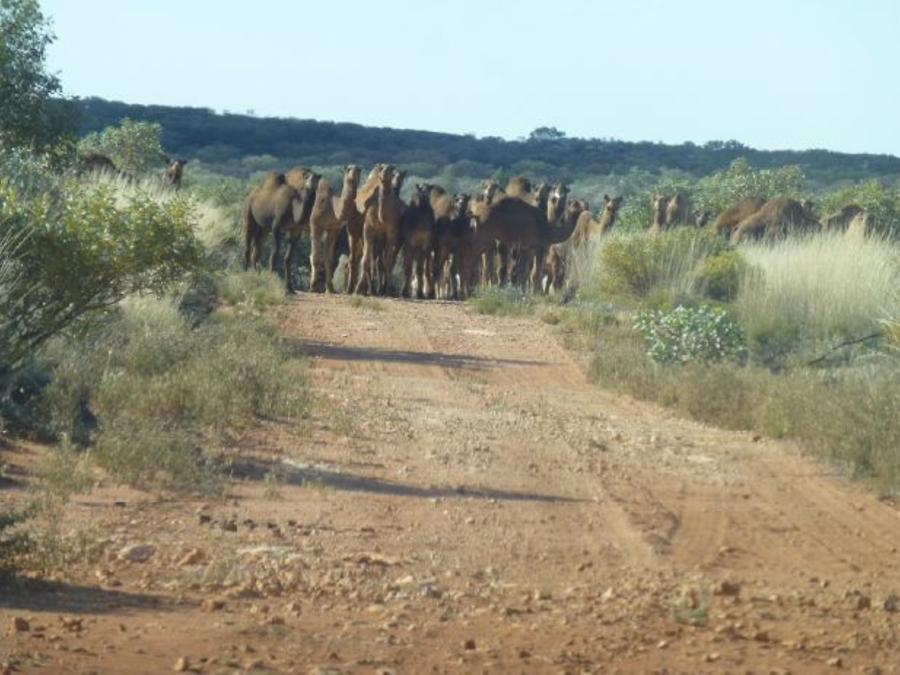 Sandy Blight Junction Road mob of camels
Foto: Heinz Dreher
One cannot be in a hurry in this country – better add that comment to the WARNING given earlier. Soon enough, nature will surprise and deliver delights again and again.

Towards the northern end of the track one sees Mount Leisler appearing in iconic form and rising some 450m above the surrounding plain, which is itself at 450m above sea level.

Mount Leisler: In the distance (left) and Staring to beckon for your attention (right)
Foto: Heinz Drher

And now it’s a challenge - Mount Leisler awaits your visit.

According to the website “peakery” http://peakery.com/mount-leisler-australia Mount Leisler has not yet been summited! 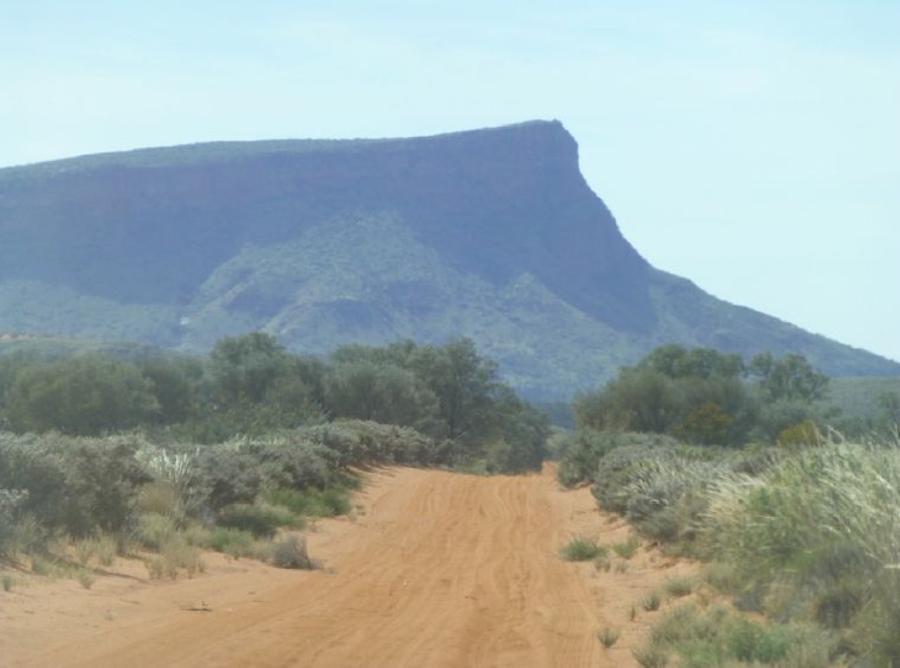 Quite clearly, it presents the challenge of being ‘conquered. If that is your wish, do get in contact and we can make preparations and plans for your ascent!