Samarkand Samarkand, Uzbekistan is one of the oldest inhabited cities in Central Asia. There is evidence of human activity in the area of the city from the late Paleolithic era, though there is no direct evidence of when exactly Samarkand proper was founded. Prospering from its location on the Silk Road between China and the Mediterranean, at times Samarkand has been one of the greatest cities of Central Asia.

The city was taken by Alexander the Great in 329 BC, when it was known by its Greek name of Marakanda. The city was ruled by a succession of Iranian, Persian, and Turkish peoples until the Mongols under Genghis Khan conquered Samarkand in 1220. Today, Samarkand is the capital of Samarqand Region, and Uzbekistan's third largest city.

The city is noted for being (again) an Islamic centre for scholarly study. In the 14th century it became the capital of the empire of Timur and is the site of his mausoleum. The Bibi-Khanym Mosque (a modern replica) remains one of the city's most notable landmarks. The Registan was the ancient center of the city. The city has carefully preserved the traditions of ancient crafts: embroidery, gold embroidery, silk weaving, engraving on copper, ceramics, carving and painting on wood. In 2001, UNESCO added the city to its World Heritage List. 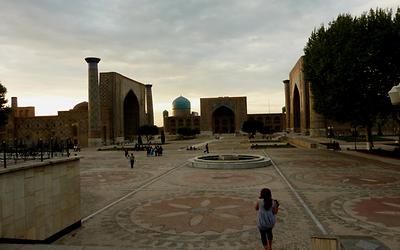 To arrive in the place Registan with its two mosques and a huge school of Koran in the sinking sun is like a trip back in time
Photo: Hermann Maurer, 2012, under CC BY-SA 3.0 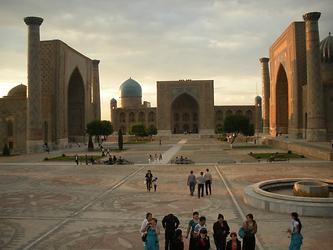 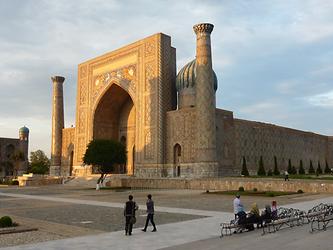 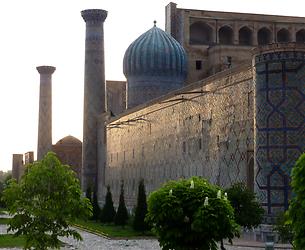 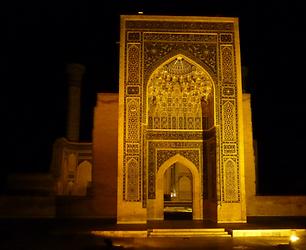 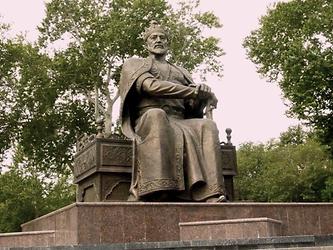 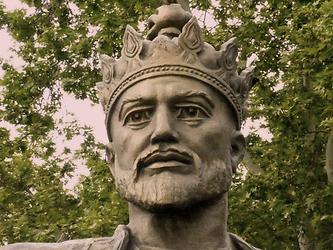 Monument of Tibur
Photo: Hermann Maurer, 2012, under CC BY-SA 3.0
Monuments remembering Amur Timur (1336-1405) who built a huge empire and is now made into the founding hero of Uzbekistan are found in many places.

Remember that Uzbekistan, Kurdistan, Kirgisistan and Kasachstan have been independent countries only sinde 1991 and are obsessed by the idea that they need an identity. In Uzbekistan this is also done to point out that Uzbekistan can and should be proud of its pre-islamic history, a way the goverment tries to keep Islam at a low pragmatic level as was done during Soviet times!

However, it must also be mentioned that Timur was certainly one of the most cruel emperors of history. Timur is considered the last of the great nomadic conquerors of the Eurasian Steppe. Timur envisioned the restoration of the Mongol Empire of Genghis Khan. He justified his Iranian, Mamluk and Ottoman campaigns as a re-imposition of legitimate Mongol control over lands belonging to them.

To legitimize his conquests, Timur relied on Islamic symbols and language, referred to himself as the "Sword of Islam" and patronized educational and religious institutions. He converted nearly all the Borjigin leaders to Islam during his lifetime. Timur also decisively defeated the Christian Knights Hospitaller at Smyrna, styling himself a ghazi.

By the end of his reign, Timur had gained complete control over all the remnants of the Chagatai Khanate, Ilkhanate, and Golden Horde and even attempted to restore the Yuan dynasty. Timur's armies were feared throughout Asia, Africa, and Europe, sizeable parts of which were destroyed by his campaigns. It is estimated that his wars caused the deaths of 17 million people, at a time when world popultion was below 350 million.

To realize the enormity of his killing, if a similar percentage of the world population would be killed today, it would amount to almost 400 million (!) people.

Samarkand has more to offer: the Registan square, all kinds of bazars, shops and handicrafting, and "gilded building" next to a very modest prayer hall. 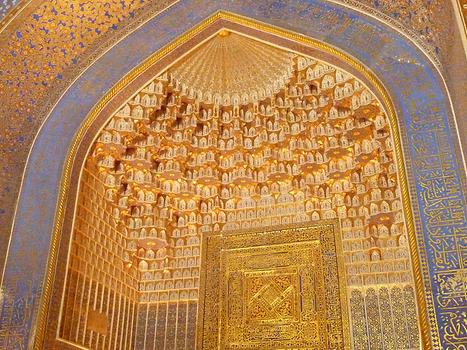 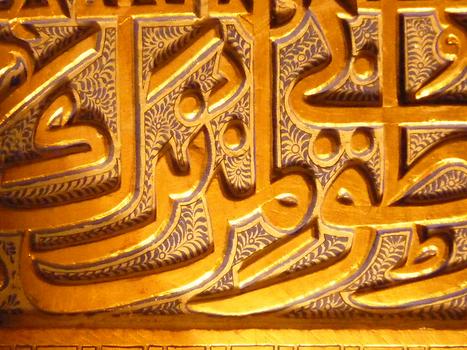 From Sarmakand it is a day's trip through blooming prairies, small villages and country style scenes to Sacar-e-Sbas where Timur built his "white palace". He overdid it: the Arc and dome collapsed under its own weight, so that now only the huge side parts and other structures are remaining, with a statue of Timur in the front, high mountains in the background, now visible between the gigantic remaining sky-high pieces of the arc. Next to it, in a quiet orchard, is the mausoleum of Timur's son. He died during a hunting trip. It is said that his father Timur never ever smiled afterwards. 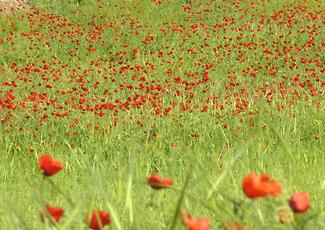 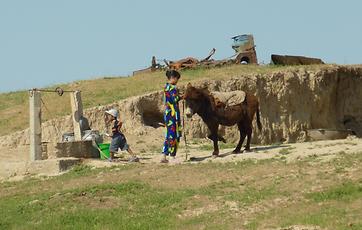 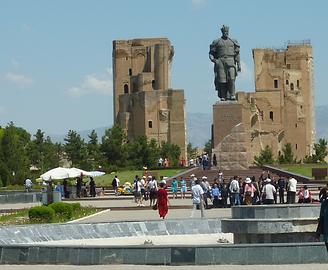 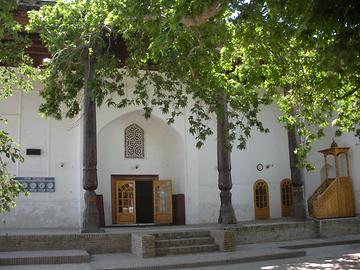 Outside Samarkand there is also the road of mausoleums, a narrow road with mausoleum after mausoleum on both sides, almost all styles to be seen, many not just ornamental, but also with a depiction of animals and faces, falsifying the notion that the Koran does not permit this. 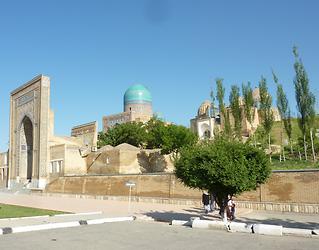 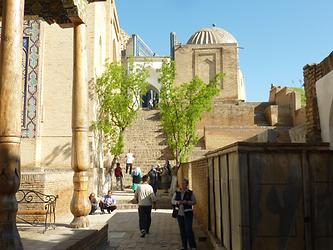 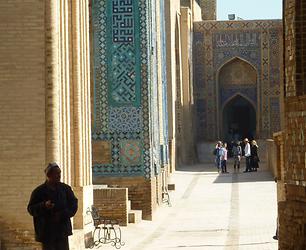 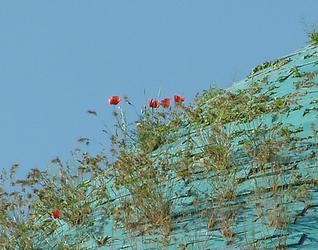 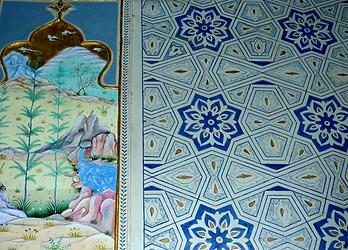 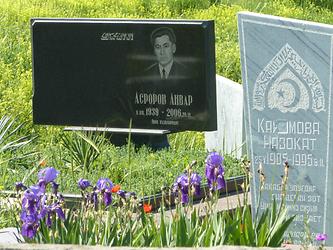 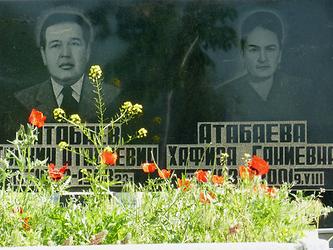 Nearby are the remains of what was once Samarkand as symbol for this whole region of cities along the silk road: centers of large empires, wiped out by some conquest from the East, the famed one by Ghengis Kahn (1162 – 1227) not the first and not the last. However, all cities were re-built, since their location near flowing water was just too good not to be used.

It may be amusing that this setting is now used for marriages, those marriages surprisingly Western style! 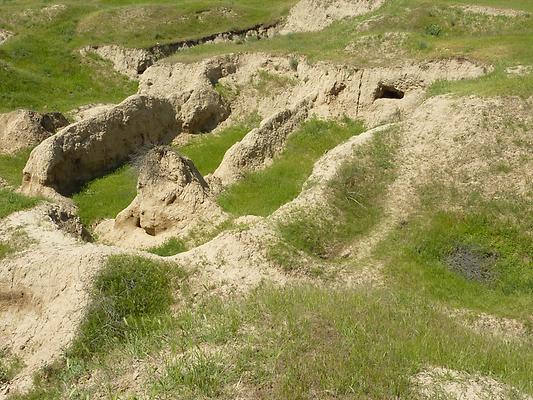 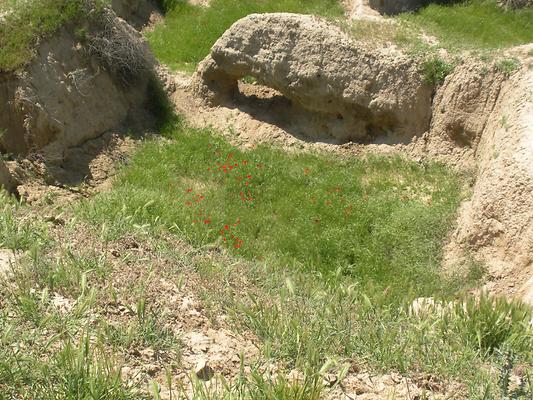 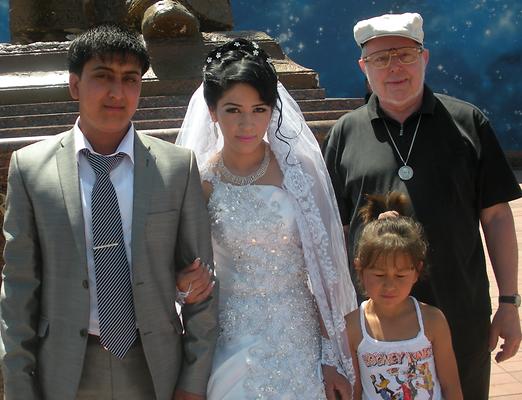