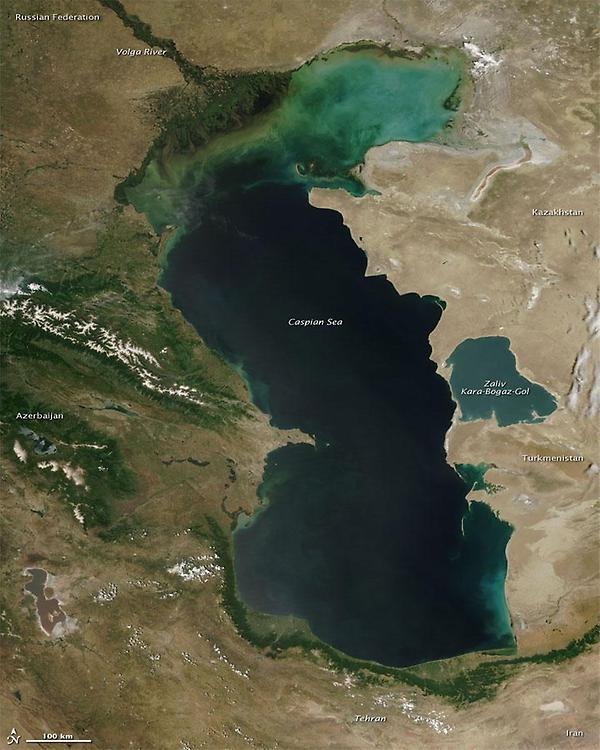 Image courtesy of NASA., under PD
Measured by surface area, the Caspian Sea is the worlds largest inland water body. It covers roughly 371,000 sq km (143,200 sq mi) and borders five countries. To the ancient Greeks and Persians, the lakes immense size suggested it was an ocean, hence its name.

A large expanse of clear sky permitted this natural-color satellite image of the entire water body. The color of the Caspian Sea darkens from north to south, thanks to changes in depth and perhaps sediment and other runoff. The northern part of the lake is just 5 to 6 m (16 to 20 ft) deep.

In marked contrast to the mountains, sand seas line the southeastern and northern perimeters of the lake, and marshes occur along the lake shores in Azerbaijan to the west. Multiple rivers empty into the Caspian Sea, the Volga being the largest.

Lacking an outlet, the Caspian Sea loses water only by evaporation, leading to the accumulation of salt. Although a lake, the Caspian is not a freshwater lake; the water delivered by the Volga River minimizes the lakes salt content at the northern end, but the Caspian grows more saline to the south. Kara-Bogaz-Gol is a saline inlet along the lakes eastern perimeter.