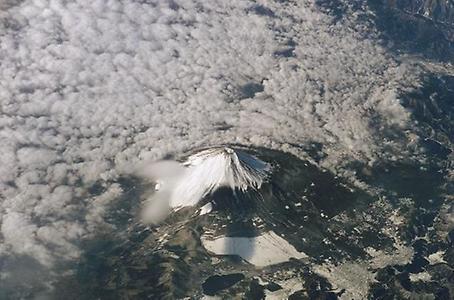 Photo: Factbook
Mt.Fuji on the island of Honshu as seen form space Shuttle. Image courtesy of NASA
Mt. Fuji may be the highest peak in Japan at 3776m above sea level, but remember, there are over 100 mountains with elevation of greater than 7000m in the world.

If not for the elevation, what makes this mountain renowned even outside of Japan? 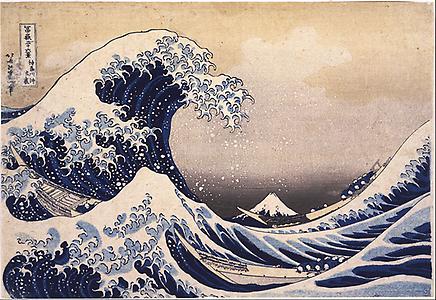 Photo of painting by Katsushika Hokusai
In public domain
One plausible answer is that it often appears in Japanese art. Perhaps the most famous is the ukiyo-e (woodblock print) by Hokusai Katsushika, in which he depicted 36 landscapes with Mt. Fuji in the background. (See Picture on the right). In this series, is the world famous picture of Mt. Fuji portrayed with an enormous wave, which is about to engulf little boats.

The reason this mountain had inspired countless Japanese artists back from the ancient times is, of course, its exceptional beauty. This can be explained by Mt. Fuji’s unique geological character. Though most of high peaks of the world are part of a mountain range, Fuji is an independent peak. It draws a beautiful curve from the summit to the foot.

Seeing this majestic mountain, people connected divinity to it. Back in Edo-era, it is said that thousands of people went on a pilgrimage there.

The fact that Mt. Fuji was registered not as “natural” but as “cultural” world heritage site explains its significance in Japanese culture. Recently it has become a popular destination for hikers, and about 300,000 people are said to hit the trail in the summer season alone. Those who make it to the top are rewarded with a spectacular view from the highest point in Japan.

Whether you see Mt. Fuji in a form of art or with your own eyes, its beauty will always attract you.