Iran is home to one of the world's oldest civilizations, beginning with the formation of the Proto-Elamite and Elamite kingdoms in 3200–2800 BC.

Iran reached the pinnacle of its power during the Achaemenid Empire founded by Cyrus the Great in 550 BC, which at its greatest extent comprised major portions of the ancient world, stretching from parts of the Balkans (Thrace-Macedonia, Bulgaria-Paeonia) and Eastern Europe proper in the west, to the Indus Valley in the east, making it the largest empire the world had yet seen.

Tehran is the country's capital and largest city, as well as its leading cultural and economic center.

Iran is a major regional and middle power, exerting considerable influence in international energy security and the world economy through its large reserves of fossil fuels, which include the largest natural gas supply in the world and the fourth-largest proven oil reserves.

Iran's rich cultural legacy is reflected in part by its 19 UNESCO World Heritage Sites, the fourth-largest number in Asia and 12th-largest in the world.

A multicultural country comprising numerous ethnic and linguistic groups, most inhabitants are officially Shia, and Persian is the official language.

Establishment of the Safavid Dynasty in 1501, which promoted Twelver Shia Islam as the official religion, marked one of the most important turning points in Iranian and Muslim history.

Starting in 1736 under Nader Shah, Iran reached its greatest territorial extent since the Sassanid Empire, briefly possessing what was arguably the most powerful empire at the time.

Its political system is based on the 1979 Constitution which combines elements of a parliamentary democracy with a theocracy governed by Islamic jurists under the concept of a Supreme Leadership.

Tag cloud is made using 100 properties. To see the rank of Iran in different properties visit Virtual Lab 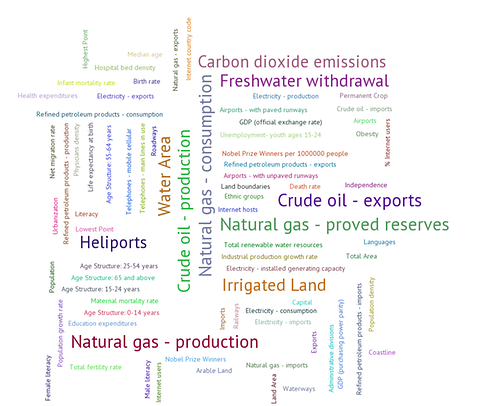 Echoes of ancient Persia endure in the land now known as Iran.