Peruvian Examples of Architecture of the 2nd and 1st century BC.#

Las Haldas, Castillo Chankillo and the Observatorio near Casma #

In 1996, I visited Peru for the second time, and I was particularly interested in the area around Casma Casma, Peru , 372 kilometres of road northwest of Lima Peru, Lima . I had moved into a small hotel and, equipped with a camera, rolls of film, compass, a water bottle and some provisions I set off just after six o'clock to visit some little-known ruins from the 2nd and 1st century BC. My first destination was Las Haldas, at that time a rarely visited archaeological site on the coast, whereto you had to walk for two kilometers across the coastal desert from the nearest point of the 'Panamericana'. I had a map sketched by Wilhelm Diessl from Linz, who had already been in this region several times and had reconstructed several ruins sketchily.

I left Casma by foot in a southeasterly direction to a petrol station on the outskirts of the city, where I approached buses and trucks during the tanking process asking for a lift. A truck driver was willing to take me for little money the 25 km to kilometre stone 347. Above the desert lay a relatively dense high fog cover, due to the 'Cold Humboldt Current' offshore, when the winds blowing from the Pacific in the west are cooling off. The fog converted the high sand dunes of the desert to the right and to the left of the highway into a little attractive dirty gray. At the kilometre stone agreed upon you could see only desert in all directions and the truck driver told me quite clearly that he thought I was insane when I insisted on getting off here. I said good-bye to him, paid the agreed sum and went at an angle of about 90 degrees to the road into the sand dunes to the right.

After about half an hour I reached the coast which falls away quite sharply and rocky here. The remains of Las Haldas gradually stagger down from a prominent high point in the coastal line to a wide plain. Probably, the ruins have never been the subject of elaborate archaeological excavations. Las Haldas is an approximately axial-symmetrical complex with numerous remains of temples or substructures dating from 1600 to 900 BC. The main axis of the complex runs from a temple on the highest elevation directly above the cliffs inland over a series of scaled terraces, stairs and courtyards of different shape and size and then becomes a more than 50 m wide road. In the plain, this road was apparently accompanied by two walls at corresponding distance. Today, only a few stones of their foundation can be seen at irregular distances over several kilometres. In view of the breadth, it must have been a kind of processional way. 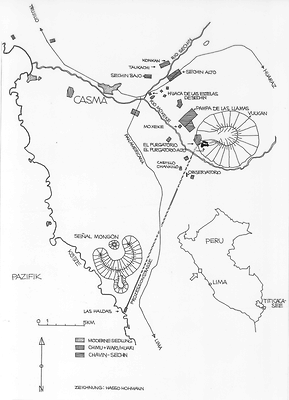 The map shows the processional way from Las Haldas to El Purgatorio Alto. It also shows the other archaeological sites as well as the modern settlements around Casma.
Drawing: Hasso Hohmann 2008, under CC BY-SA 4.0 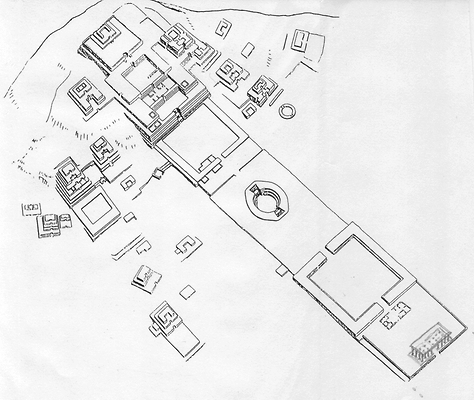 A scenography of Las Haldas with the appendix of a column hall at the entrance to the cult center.
Drawing: Wilhelm Diessl 1992, Portico by Hasso Hohmann 2009., under CC BY-SA 4.0
This picture shows quite well the foundation th column of the entrance hall of the ceremonial center of Las Haldas. On the spot, the soil marks are hardly recognizable even if you know that they exist and look carefully for them.

Probably, once there was a low enclosing wall at the entrance platform, and behind it, to the right and to the left of the entrance, a kind of portico, a column hall with four columns, side by side and also one behind the other, on each side. In the passage, the columns were a little further apart. The altogether 32 columns might have carried a roof, so that an impressive entrance building for the complex was created. Today, the holes for the columns can be recognized only by the rhythmically arranged, slightly visible soil marks. Evidence of where the wood for the columns and roofing came from will at best be provided by archaeological excavations. In principle, however, it is to be assumed that relatively early in history rafts were under way for trade along the coast. The conquerors reported on commercial rafts.

In the rear area of the almost square entrance field was a second building with probably several rooms. Adjoining was a square courtyard, framed by two massive, flanking U-shaped platforms. A longish, rectangular field with a centrally arranged round lowered courtyard with two accesses in the centre line comes next. This courtyard is reminiscent of several similar courtyards in Caral, dating from the 3rd century BC, and of the round courtyard in Chavin de Huantar east of the labyrinth with the Lanzón. The Chavin culture was named after this complex which is located high up in the Andes in the valley of the River Mosna at about 3200 m above sea level and dates from around 1000 BC.

Then comes a larger framed courtyard and staggered smaller courtyards built on terraces and connected by flights of stairs. On the highest platform one can see the single room of a temple. On the right and on the left of this construction there are further platforms with courtyards, more platforms and smaller temples. There is also another round and smaller lowered courtyard with two exits to the north.

The tour, the drawing and the photographic documentation of Las Haldas had already taken a lot of time. It was already 3 pm. I tried to follow the more than 50 m broad 'road' inland through the desert. But after a few kilometers it disappeared under sand and could not be pursued any further. In the meantime, the morning fog had long since vanished and the sun shone on the drifting dunes with hard light and therefore the sharp-edged formations of the dunes could be seen with details of their delicate ribbing like perfectly modeled reliefs. On some of them traces of different beetles or lizards could be seen. The floor of the moving dune was relatively flat and in many places almost had the pattern of a parquet floor. 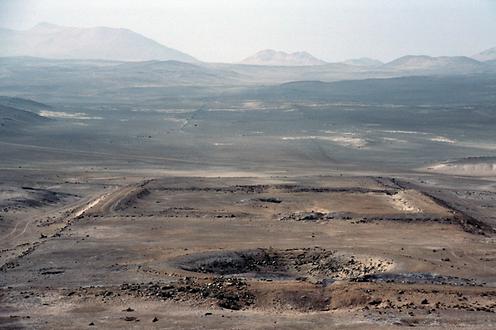 The lowered area in the image foreground is the circular cult site, surrounded by an elliptical, slightly elevated platform. Behind it is the larger framed courtyard. The platform behind with the column hall does not show even a single pillar. Then a broad processional road of about 55 m, of which only parts of the foundation strips of its flanking walls are recognizable.
Photo: Hasso Hohmann 1996, under CC BY-SA 4.0 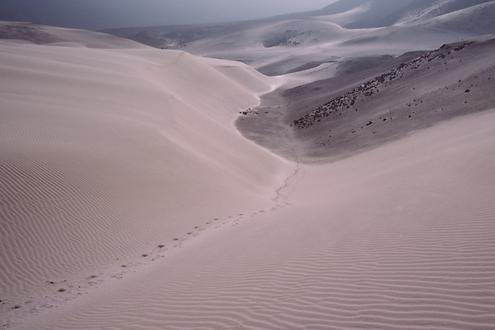 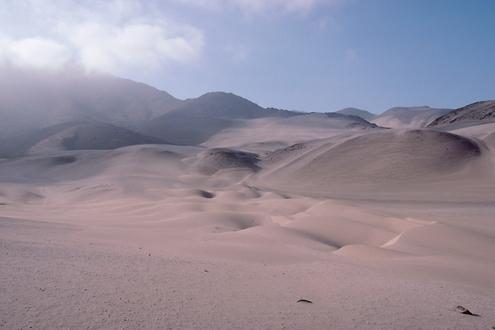 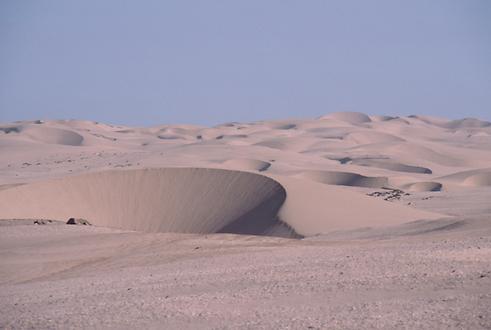 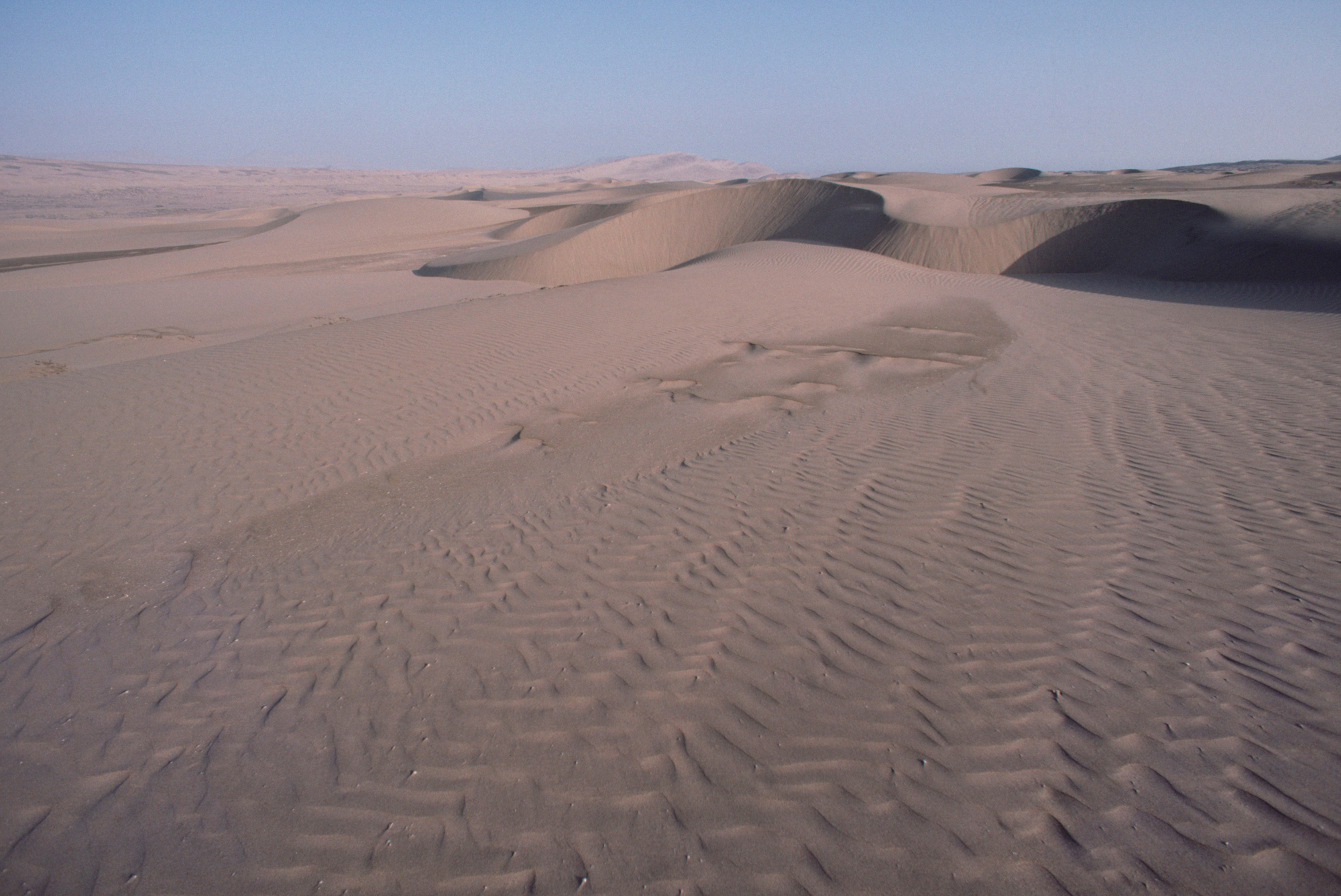 A special kind of herringbone pattern caused by little sand above the firm ground.
Photo: Hasso Hohmann 2003, under CC BY-SA 4.0 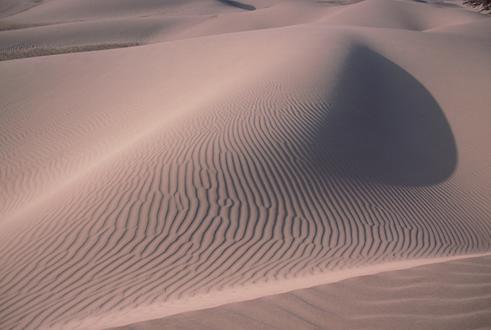 Sand dunes with characteristic ribbings as can also be found in sand underwater, reminding of the skin of humpback whales or the friction ridges on a human finger. Eddies caused by softly blowing wind or water movement form these ribbings on the sand surface. Air or water can skim over these eddies smoothly.
Photo: Hasso Hohmann 2003, under CC BY-SA 4.0

Shortly afterwards I walked up to the Panamericana and, at a passing place, tried to find a vehicle to take me along for about 10 km to the north to kilometre stone 361. There was only little traffic, most of the vehicles were fully occupied and usually much too fast to stop. The first car that stopped was a police car; it took me along and, when I wanted to get off at a dirt road on the right side of the main road, the policemen asked me whether I had enough water with me and also warned me that I was already relatively late for a longer hike. I told them what I was up to and thanked them, the police car moved on to Casma and I walked at a good pace about three kilometers to Castillo Chankillo.

Google Maps picture of the Castillo Chankillo. The five angled entrances through the massive outer defensive wall, the four ones through the inner defensive wall and the three entrances in the thin third wall are clearly recognizable. The outer wall has a length of about one kilometre and consists of several granite stone walls built close together. 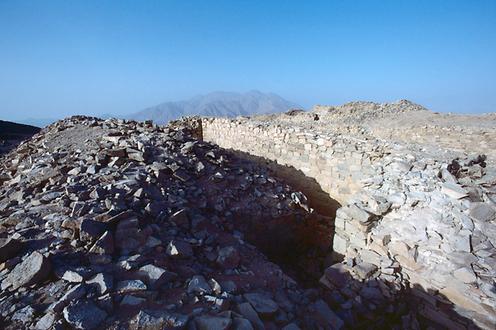 One of the double-angled gates of the inner defensive wall. In the background: Cerro Mucho Malo, a volcano.
Photo: Hasso Hohmann 2004, under CC BY-SA 4.0

When I arrived at the old fortress, the sun was almost disappearing over the horizon. I visited the mighty fortifications, with a north-south expanse of about 300 meters, with two 8-meter-thick enclosing walls, with staggered gates, where the almost 2500-year-old wood of the original lintels still carries the weight of the granite stones above. I made notes and took pictures. The valley of the Rio Casma deep below the fortress was already in the shadow. The landscape behind it looked like a lunar landscape. The thirteen towers of the Observatorio, with their staircases on a ridge aligned north-south, could be seen well in the dim light of the valley. On the other side of the Rio Casma I saw the Cerro Mucho Malo, on whose western slopes, a few years later and sitting comfortably in front of my computer in my chair in Graz, I would discover the remains of a whole prehistoric city which I named 'El Purgatorio Alto'. As a matter of fact, I had just wanted to see 'El Purgatorio' at the foot of this mountain from above on Google Earth, when I - by pure chance - panned a little aside when focusing and saw innumerable layouts of houses (see: El Purgatorio Alto).

Then it got dark quickly. Because of the extreme drought and the lack of light pollution, one could see against a dark background the stars of the Milky Way as well as the rest of the sky of the southern hemisphere as far as the Southern Cross so clearly as hardly anywhere in Europe. After these observations I hurried back to the main road as fast as possible, trying not to leave the dirt road with the help of my small torch.

When the Panamericana came into sight, I saw a vehicle from afar. When I got closer, I recognized the policemen who apparently had returned to wait for me and who now took me with them to Casma. I had not expected such a comfortable transfer and thanked them very warmly. In the city I bought some food and went to the hotel, where I was already expected.