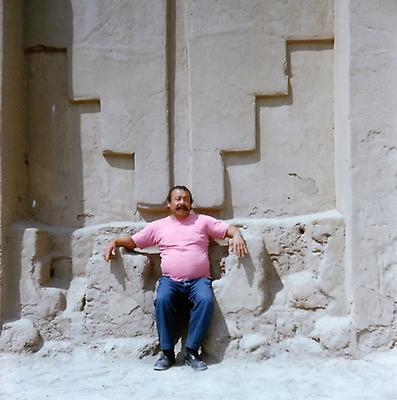 Don Eduardo Calderon Palomino was a man, you like to remember. He died in 1996 but still today his work is showing effect.
"el Tuno" - the tuna-fish - family and close friends would call him heartily.

Don Eduardo was a fisherman, artist, traditional healer, a teacher and host, a host for curious "Northerners" who came to see him and to learn from him.
Father of 16 children - "all with one woman" he would say while his small sharp eyes would become even smaller and the wrinkles in his sunburnt face broader with a smile.

Eduardo lived in Las Delicias, part of Moche, a few miles south of Trujillo, at the coast in Northern Peru. The soil there is very fertile, but the lack of water limits the agricultural possibilities. So the sea, with its schools of sardines is the main supplier of food and has been it for more than 2000 years. Adapting to those facts, people living in the valley of Rio Moche built up fine local cultures, known by the names "Mochica", in centuries long before the Incas, later "Chimú".
Chan-chan   is one of the historic sites at Rio Moche, and included the housing of the leading person, the Palacio Tschudi.

Eduardo was embedded in this cultural environment. He and his family ran their own hall with a very basic restaurant there and a simple, local style "hostal", which could accommodate small groups of visitors, who came to learn about Peruvian Shamanism, the witchers and the healers, and the cosmos in which their skill would be working.

How would Eduardo and his wife, Doña Maria build this up? Doña Maria was a skilled midwife and more, an expert for herbs and plants.

Don Eduardo, as a young man, found for himself, he had inherited from his fathers the ability to "heal".
To "heal" is an old and traditional way in Peru, to get things right again. "Healing" requires accepting a second form of reality that one enters in a status of trance.
"Healing" includes restoring a patient's health as well as mending a broken heart, tracing stolen objects or balancing out nasty, envious neighbours.

So Eduardo went north to "Las Lagunas", where a well-recognized "Curandero" (="healer") lived, by whom he was accepted and educated to become a Curandero. A Curandero needs to overcome a barrier that would keep him "brujo", a witcher. Brujos/brujas do good or bad things for payment; -- Curandero/as work only for higher values.

After he came back, his skills and knowledge soon gave him a good name. But being a Curandero is not a job, that one can live on. So Eduardo went to work on small local as well as big commercial fishing-boats. At the same time he widened his skills of local art.

When some restoration-works at the pre-Inca ruins of "Palacio Tschudi" began, his knowledge of art-forms and techniques were honoured by an offer for an engagement as an art-consultant for the restoration-works. During that time Eduardo was '"detected" for his shaman-skills by, both at the same time, esoteric scouts from the US and by European anthropologists.

Cooperation in both directions began: Eduardo introduced interested groups into base and background of his shaman work, the healership, el curanderismo. After a while Eduardo broke with the North-Americans. This allowed spending more time with his Austrian friends. A film was produced about healing methods of shamans, in which he took part. by Lhotzky The contact and cooperation with another Peruvian Curandero, Agustin Rivas Vasquez grew. Eduardo also travelled to Europa, to hold introduction courses into curanderismo and, in return, was visited at his home by people, who had seen him in these courses. A situation developed, fertile for all people involved and over many years, including the children of Eduardo and Maria.

But all that time Eduardo worked with foreigners, he would also practice his skills in healing sessions, diagnosis with guiney-pigs, healing with mapacho-fumes, cleansing rooms/homes from bad situation, or even just plain talks, when local people came to see him, asking him for help.

Although a healer, unfortunately he could not heal himself, when serious health-problems hit him. But before he died, he saw his sons having their own fishing-boat to drive out and fish for the up- and down-going schools of sardines that had been depicted already on the ancient walls of Palacio Tschudi of Chan-Chan 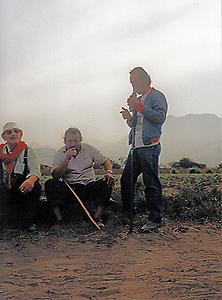 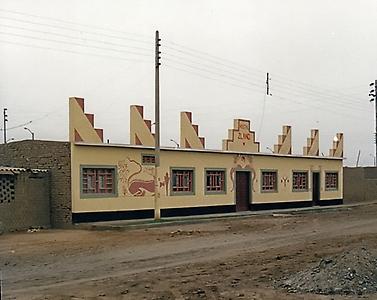 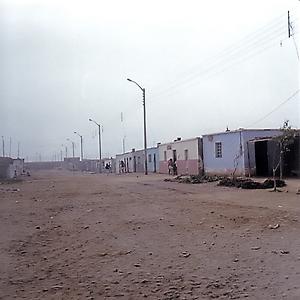 further down the road

It might not have been the best idea to let the now called "World-Museum" in Vienna buy Eduardo's main tool, his "mesa", to keep it stored somewhere in a box.
Maybe his family had better dumped the mesa in the Pacific Ocean.