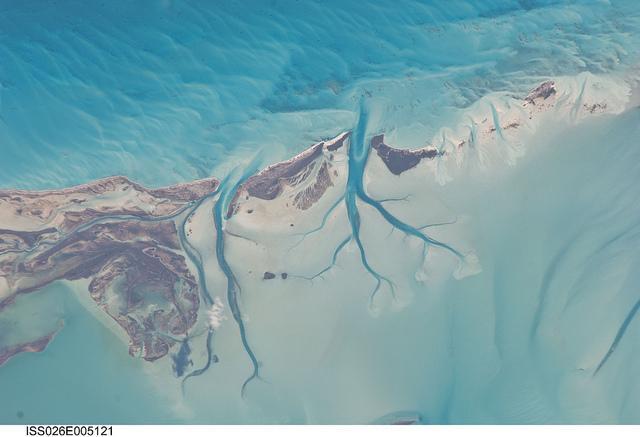 Image courtesy of NASA., under PD
The islands of the Bahamas in the Caribbean Sea are situated on large depositional platforms (the Great and Little Bahama Banks) composed mainly of carbonate sediments ringed by fringing reefs - the islands themselves are only the parts of the platform currently exposed above sea level.

The sediments are formed mostly from the skeletal remains of organisms settling to the sea floor; over geologic time, these sediments consolidate to form carbonate sedimentary rocks such as limestone. This detailed photograph taken from the International Space Station provides a view of tidal flats and tidal channels near Sandy Cay on the western side of Long Island, located along the eastern margin of the Great Bahama Bank.

The continually exposed parts of the island have a brown coloration in the image, a result of soil formation and vegetation growth (left). To the north of Sandy Cay an off-white tidal flat composed of carbonate sediments is visible; light blue-green regions indicate shallow water on the tidal flat.

Tidal flow of seawater is concentrated through gaps in the anchored land surface, leading to formation of relatively deep tidal channels that cut into the sediments of the tidal flat. The channels, and areas to the south of the island, have a vivid blue coloration that provides a clear indication of deeper water (center).