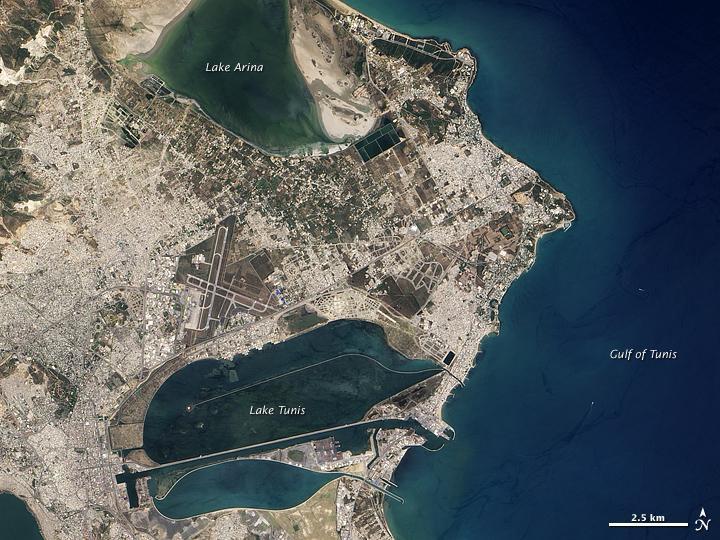 This image courtesy of NASA., under PD
"Carthage Carthago, Gouvernement Tunis, Tunesien is situated at the inmost point of a gulf into which it protrudes on a strip of land, almost entirely surrounded on one side by the sea and on the other by a lake," observed the Greek historian Polybius in the second century BC. He pointed out some of the features that made Carthage attractive for human occupation for centuries.

Today, Carthage is a suburb of Tunis, the capital city of northern Africas Tunisia. Although cityscape covers most of the ancient port city, the areas attractions to ancient mariners remain apparent. In the east, Carthage narrows to a point that stretches into the Gulf of Tunis. From that point, skinny strips of land extend toward the northwest and southwest, both strips enclosing water bodies.

North of Carthage is Sebkhet Arina, a shallow evaporative lake. Rocky outcrops connected by sand separate this shallow lake from the Gulf of Tunis. South of Carthage is Lake Tunis, a water body actively modified and maintained by humans over thousands of years. Skilled merchants and mariners, the ancient Phoenicians founded Carthage probably sometime between 817 and 748 BC.

Romans destroyed the city in the Punic Wars around 146 BC, but eventually rebuilt in the same area.