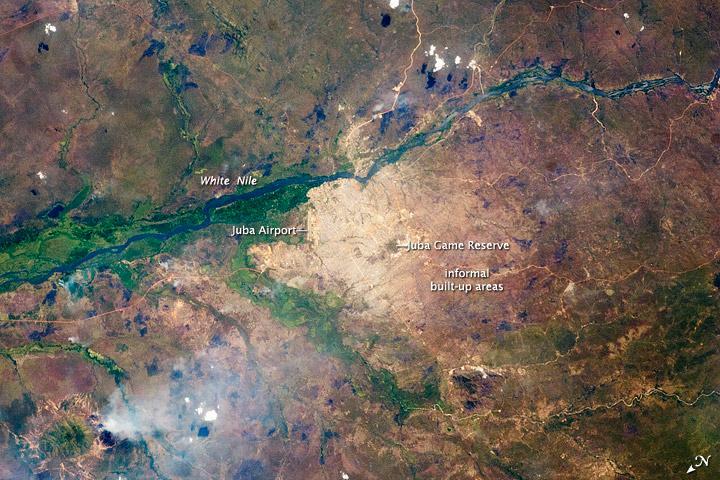 Image courtesy of NASA., under PD
Juba Juba, Central Equatoria, Südsudan , a port city on the White Nile, is the capital of South Sudan and one of the fastest growing cities in the world. Jubas population is estimated to be roughly 350,000 to 400,000.

The city has doubled in size since 2005, when a peace agreement ended the civil war in Sudan. Both hopeful immigrants and returning residents have created the population surge. The city was a central point for humanitarian aid, and the operations base for the UN and NGOs during the Sudanese conflicts.

During the fighting, city infrastructure and main transportation arteries suffered heavy damage. The city is still surrounded by army camps and squatter settlements (labeled "informal built-up areas" in the image). They appear as muted gray areas extending outward from the center of the city. The city also hosts the Juba Game Reserve, a protected area of savannah and woodlands that is home to key bird species.

Since independence, a variety of countries and international organizations have helped rebuild Jubas roads, railroads, and airport. Unfortunately, South Sudan continues to experience local wars with a variety of armed groups, including on-going conflicts with Sudan over oil-rich territories.