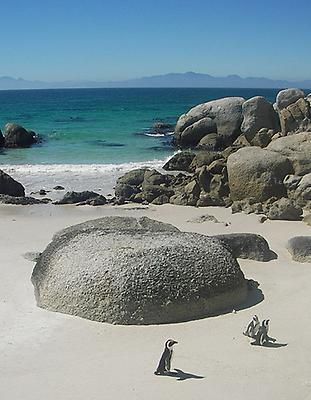 A stark white landscape, freezing cold temperatures, a stiff breeze and snow as far as the eye can see, a living environment predestined for penguins. A typical cliché, but there are in fact several exceptions, for example there is a penguin species which lives on sunny beaches and sandy inshore islands in southern Africa. It is called African penguin (Spheniscus demersus), or Jackass penguin, because of its strange call which sounds like a mule braying. Penguins are birds even though they are a bit untypical for birds since they can not fly and spent most of their time in the water or underwater. A bird should have a light, small body and a big wingspan. Well, in comparison, a penguin is a bit ungraceful and bearish in appearance with stiffened, flattened wings which evolved into flippers. 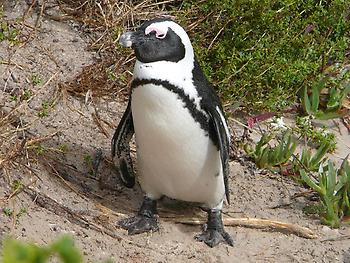 The African penguin is the only representative of its kind which lives and breeds in Africa. The natural environment of African penguins is found between the south-eastern part of the Atlantic Ocean and the south-western part of the Indian Ocean along the coast of Africa between Namibia and Port Elizabeth Port Elizabeth, Ostkap, Südafrika (South Africa). The body of the African penguin has an average length of 70 centimetres and a weight of 2.4-4 kilograms. The only other penguin which is similar in appearance is the Magellanic penguin (Spheniscus magellanicus) which lives in South America and does not have either a dark collar or a white spot on its beak. There is a slight sexual dimorphism apparent, males generally speaking are larger and have larger beaks than the females. All adult birds have a distinctive colouring, called counter shading, with white coloured stomachs and black backs. Seen from above the penguin is strongly camouflaged against the dark waters below. Seen from below the white belly is nearly indistinguishable with the light of the water surface and therefore hard to spot by predators. 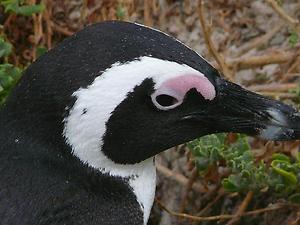 African penguins are accustomed to the heat of their environment as they have pink glands above their eyes to help them cope with changing temperatures by thermoregulation. If the bird gets hotter, its body starts pumping blood into the glands to be cooled by the surrounding air. During this process the glands get pinker and pinker. Furthermore African penguins are cooled by panting. Most of the time African penguins are found swimming in the ocean or in their nesting den. A major advantage of the warm region is that the breeding seasons lasts the whole year, although they have a main breeding season between March and May in South Africa. Most of the African penguins stay at the same colony their whole live long, but every now and then a penguin starts to wander and connects up to another colony. Often they form breeding pairs which last over many breeding periods, in some known cases even up to ten years.

African penguins have an average lifespan of approximately 10 to 27 years if they live in the wild, when they are kept in captivity they can reach an age of up to 30 years. In the wild they often fall to predators, like sharks, Cape fur seals and sometimes even orcas or leopards. Their young ones are preyed upon by mongooses, genets, caracals, domestic cats and kelp gulls, which are a danger to the chicks as well as the eggs. African penguins are an endangered species as only approximately 55.000 birds still occur in southern Africa. A combination of threats led to the drastic decline since the beginnings of the 19th century when roughly four million birds existed. It is estimated that the African penguin can become extinct within 15 years. One reason for this is surely the commercial fishery which leads to a change in diet to less nutritious prey and longer distances which have to be covered by the penguins, but also the global climate change causes alterations in the occurrence and the abundance of their prey. Their diet is based on schooling fish, especially pilchards, anchovies, Atlantic horse mackerel and herring, but also on marine invertebrates such as squid and small crustaceans which are hunted in coastal waters, as their maximum diving depth is roughly 130 metres. Eggs were collected and sold as delicacies up to the mid-20th century further reducing numbers. Guano is removed from the breeding islands and used as fertilizer which causes the birds to loose their burrowing material necessary for breeding. Their environment is polluted by petrochemicals from spills, shipwrecks and cleaning tankers while at sea. 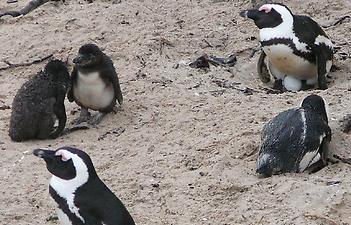 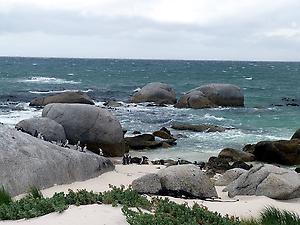 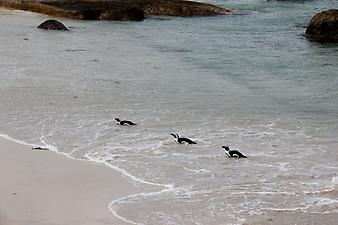