The Austrian botanist Friedrich Welwitsch discovered a plant in 1859 that was named after him, „Welwitschia mirabilis“. It deserves the attribute “mirabilis” since it is often called the “ugliest but most interesting plant.”

Indeed the plant did not fit into the then existing classification system of Linné who in his books Species Plantarum (1753) and Systema Naturæ (tenth edition 1758) defined the basic classification system as is still more or less in use. To fit Welwitschia mirabilis in, a new family of plants had to be introduced: “Welwitschiaceae”.

The plant grows only in a strip of desert parallel to the Atlantic in Namibia and Angola. The largest specimens are supposed to be a few thousand years old. Despite their age by which time they resemble a sizeable bush of up to 1.5 meters they have the appearance of a large bundle of leaves hardly surviving. The leaves can strech out to 8 meters horizontally. The plant grows very slowly. 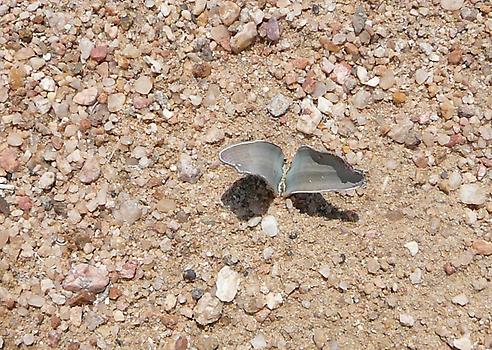 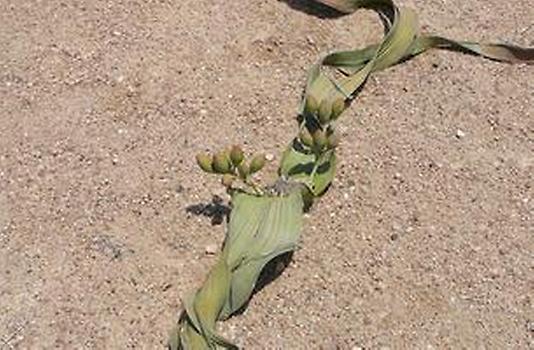 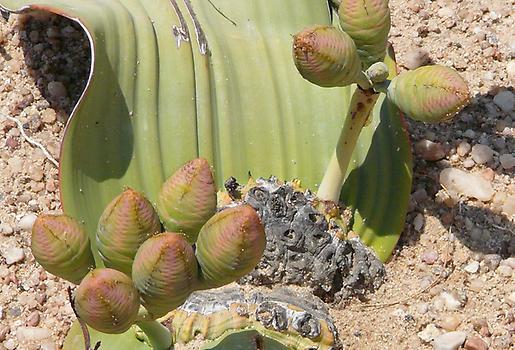 In the center one can notice a stem that does not grow upward, but downward into the sand. This stem or root can grow up to 8 meters in length, but it never gets close to groundwater (that is about 100 m below the surface, if it exists at all). Thus, it cannot take water from there: The stem is only for anchoring the plant against storms in the sand and as reservoir of food and moisture.

Hence for a long time it was not clear where the plant gets the water from: some of them grow in areas where there is never any rain, not even fog. This gets more mysterious when one hears the story of locals who claim that Europeans have an evil eye: when they see a Welwitschia it is bound to die within a few months!

As incredible as it sounds, this statement is indeed true. And the reason is known by now: Welwitschia has a network of thin tentacles (tap roots) just below the surface of the sand that can extend up to 30 m away from the center of the plant. This “spider-web” is able to catch the once in a while occurring dew! Europeans who see the strange plant walk around it, take photos from all sides, in this way breaking the web that is responsible for the anyway scarce moisture the plant gets. So the plant will indeed wither and die within the next months! 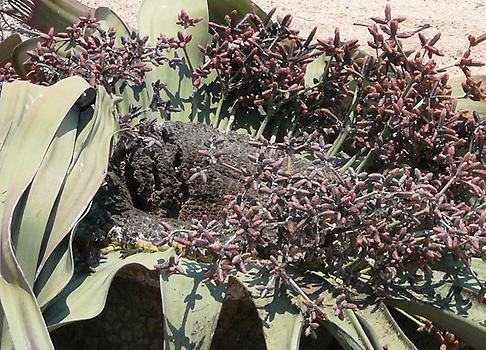 The leaves are believed to abe able to also pick up moisture (dew) but are mainly for photosynthesis converting carbon dioxide and water into the substance for leaves and roots is not yet known. If there is no moisture (dew) for a long period, the ends of the leaves start to die. Wind and animals are also damaging the plant over hundreds of year: thus, despite the fact that even the largest plants consist only of two leaves, the leaves become split, frayed and shredded into so many several well-separated strap-shaped sections that at first one may think one is dealing with more than two leaves. 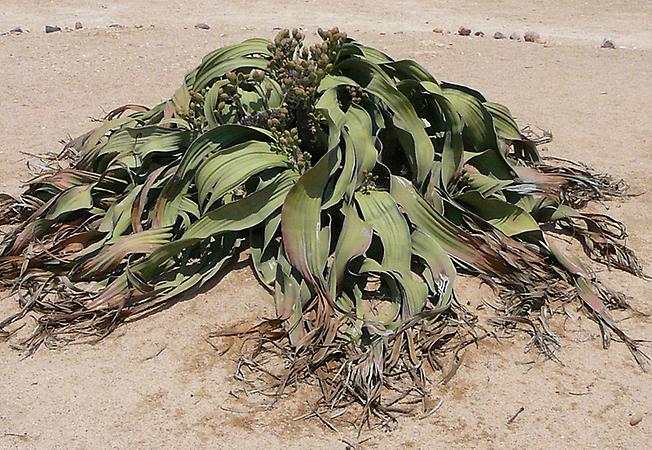 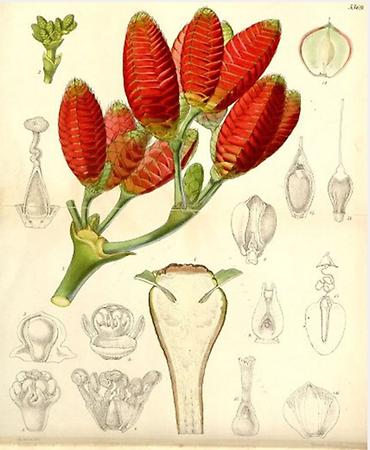 The picture above left show a female plant that is thought to be over 2.000 year old . When you see a Welwitschia remember: do not walk close to it or you will ruin the spider-web collecting the dew and the plant will die. For this reason, some of the old and easily accessible plants have now been protected by a circle of stones (parts of it visible in the picture), telling you not to step inside. The number of Welwitschias has not much changed in the last one hundred years: there are an estimated 5.000 specimen, so the plant does not seem to really endangered. However, fungal infection of female cones severely reduces seed viability. Other threats include injury from off-road vehicles, collection of wild plants and overgrazing by zebra, rhino and domestic animals.

It is one of the ironies in our world that the war in Angola has made the Welwitschia population in that country much more safe: due to many land mines tourists or poachers tend to leave the plants alone!

Welwitschias are also grown today in botanical gardens with good success, indeed seeds are readily available. By using the right dosage of water-mist sprayed on them they grow considerably faster than in their natural habitat, yet even so the plants look quite modest even after 50 years.