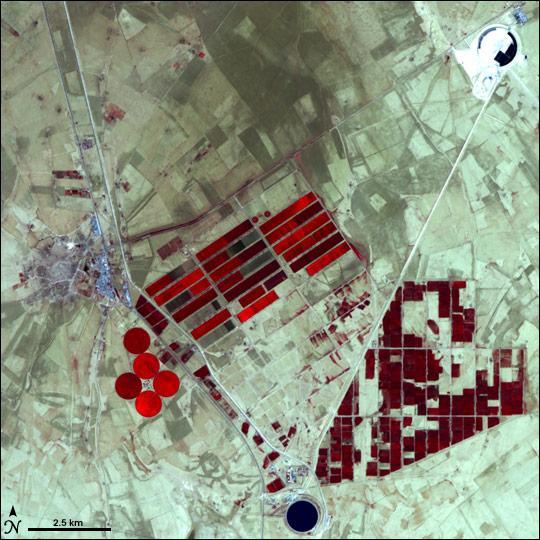 Image courtesy of NASA., under PD
In the 1950s, oil exploration in Libya revealed that the country also had huge aquifers lurking underneath its scorching sands. Libyans weighed the costs of bringing water up from the aquifers against transporting water from Europe or the desalination of salt water, and chose the aquifers as the most cost-effective option.

This false-color satellite image shows part of Libyas massive water project, known as the Grand Omar Mukhtar, near the city of Suluq. Libyans plan to make the Grand Omar Mukhtar the countrys largest man-made reservoir. Water residing in reservoirs appears twice in this image, in the upper right and at the bottom.

In both cases, the water appears dark blue. In this image, vegetation appears red, and the brighter the red, the more robust the vegetation. In this arid place, the vegetation results from irrigated agriculture, so the areas of red appear in the crisp geometric shapes of carefully planned fields. The circular spots of red are the result of result of center-pivot irrigation.