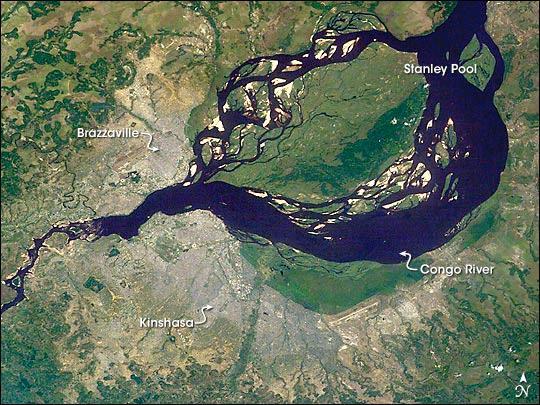 This astronaut image shows two capital cities (brownish-gray areas) on opposite banks of the Congo River. The smaller city on the north side of the river is Brazzaville, while the larger, Kinshasa, is on the south side. The cities lie at the downstream end of an almost circular widening in the river known as Stanley Pool. The international boundary follows the south shore of the pool (roughly 30 km in diameter). The Republic of the Congo, originally a French colony, is sometimes called Congo-Brazzaville - as opposed to the Democratic Republic of the Congo (known from 1971 to 1999 as Zaire) which is often called Congo-Kinshasa, originally a Belgian colony. Brazzavilles population is less than a tenth of Kinshasas. There is no bridge between the cities so that water craft of many kinds ply between them. It is not uncommon to see dugout canoes being paddled between the cities. Photo courtesy of NASA., under PD