What did South Africa look like 300 million years ago? Unlike today it was covered with glaciers and ice. Thanks to satellite imagery and digital data geologist Daniel Le Heron is making exciting new advances in the field of sedimentology and gets insights into the secrets of the Earth's icy past.# 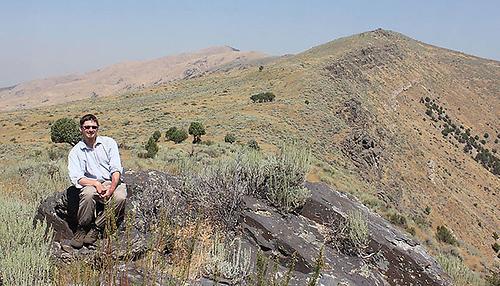 Geologist Daniel Le Heron is interested in the Earth´s icy past. In the picture, he is sitting on 720 million year old glacial rocks during fieldwork in Idaho.
Photo: © privat

Death Valley, Sahara or the deserts of Northwest China. For his research, Daniel Le Heron is travelling the world. The young geologist is looking for evidence for ancient ice – surprisingly in some of the hottest places on Earth. In his current project, Le Heron – since March 2018 part of the Department of Geodynamics and Sedimentology at the University of Vienna – is tracing back ice ages that happened 300 million years ago in South Africa.

Part of his work includes creating maps of the region and putting them together in order to understand in which direction the ice was flowing, how it was retreating or how quickly it moved. All this can be accomplished by using simple technology: a drone. The Unmanned Aerial Vehicle takes photos and records the heights. Back in the lab, the photos are reassembled in their correct position using computer software. The structure of ancient landscapes cut by ancient ice sheets is then revealed.

"Sometimes we are so close to the features that we cannot see them. We have to stand back and look at things from a bird's-eye perspective – there the drone comes in. It is amazing, easy and cheap and surprisingly nobody has ever done it before", says Le Heron about his groundbreaking research.

How does a scientist who studies the structure of the Earth get the idea of taking aerial images? The answer is simple like that: "As a kid I loved racing remote-controlled cars and flying remote-controlled helicopters. When I talked to a colleague, I discovered his drone and he gave it to me for a test flight. First I thought his confidence was misplaced, that I was going to crash it, but I came back with stunning results – the images were great."

Research in the outdoors#

Le Heron is at his best in the field, because he has a passion for both research and teaching in the great outdoors. "Without fieldwork, we could not even begin to describe the Earth’s glacial record, nor understand the differences between different ice ages; basically, we would not be able to do geology properly", claims Le Heron: "Fieldwork is equally important to train new geologists. They need to see the world in several dimensions in order to understand how the world is structured on the surface and how it changed through time."

Le Heron is enthusiastic about geologically related adventures, but also for travels around the globe with his wife Anita, hiking, cycling and the Viennese Apfelstrudel, his "soft spot". The young geologist chose Vienna wisely – not only because of its pastries: "The University of Vienna offers an excellent environment for my research, it is well-positioned for collaborations, gives opportunities to train PhD students and is turning increasingly international", says Le Heron. 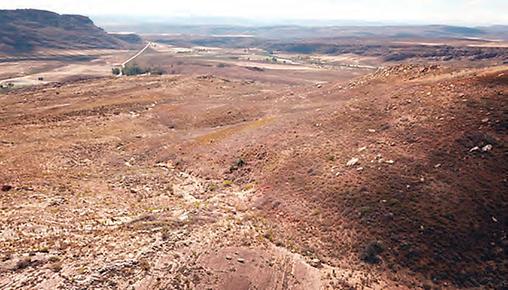 Where humans would only see the features on the ground – like bushes or trees –, the drone is capable of overviewing the whole area and documenting traces of ancient ice. The photo shows 443 million year old glacial grooves in Pakhuis Pass, South Africa.
Photo: © privat 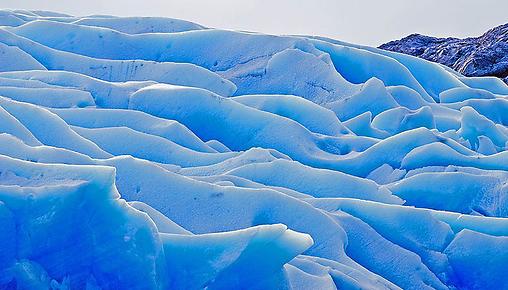 Is a new ice age, just like in the disaster movie "The Day After Tomorrow", possible? It is: "We have strong evidence that ice ages have occurred many times, sometimes in a rhythmic way, over Earth’s history", says Le Heron: "A future scene with Vienna covered by hundreds of meters of ice may appear disastrous, but at the same time we could take it as a sign that humans have not completely thrown the system off track."
Photo: pexels, under PD

Le Heron himself grew up in Guernsey on the Channel Islands, a place not at all known for cold weather. He admits that nevertheless he has always been curious about ice, both ancient ice and ice of the modern days: "The record of Earth’s glaciation is over the last 2.4 billion years is incredible. Some glaciations were more intense, some left behind different features, and all of them have their own story to tell about how ice expanded, and ultimately melted, over our planet." (hm)