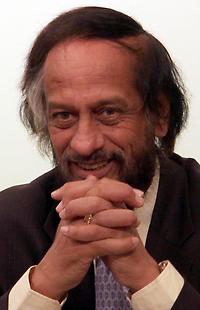 Pachauri R.K., PhD, Director General of TERI, the Energy and Resources Institute in New Delhi from 1982 (when he was 42) till date.

Pachauri was born in Nainital, India.

He was educated at La Martiniere College in Lucknow and at the Indian Railways Institute of Mechanical and Electrical Engineering in Jamalpur, Bihar. He belongs to the Special Class Railway Apprentices, 1958 Batch, an elite scheme which heralded the beginning of mechanical engineering education in India.

He served as Assistant Professor (August 1974 – May 1975) and Visiting Faculty Member (Summer 1976 and 1977) in the Department of Economics and Business at NC State.

He was a Visiting Professor of Resource Economics at the College of Mineral and Energy Resources, West Virginia University. On his return to India, he joined the Administrative Staff College of India, Hyderabad, as Member Senior Faculty (June 1975 – June 1979) and went on to become Director, Consulting and Applied Research Division (July 1979 – March 1981). He joined The Energy and Resources Institute (TERI) as Director in 1982 and was subsequently redesignated as Director General. He was also a Senior Visiting Fellow at the Resource Systems Institute (1982), and Visiting Research Fellow at the World Bank, Washington DC (1990).

On 20 April 2002, Pachauri was elected Chairman of the Intergovernmental Panel on Climate Change, a United Nations panel established by the World Meteorological Organization(WMO) and United Nations Environment Programme(UNEP) to assess information relevant for understanding climate change and served as Chairman till 2015.

He was and is member of numerous world-wide influential organisations.

He, as Chair of the IPCC, received the 2007 Nobel Peace Prize along with former US Vice-President Al Gore... one of the many awards he obtained as can be seen from a more detailed profile of Pachauri, like 25 (!) honorary doctorates from institutions all over the world.