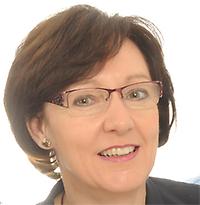 Gitta Domik is Professor at the University Paderborn, Germany.

Head of “Computer Graphics, Visualization and Image Processing“ at the Department of Computer Science at the University of Paderborn.
She is currently Vice Dean of the Faculty for Electrical Engineering, Computer Science, and Mathematics.

Domik's research and teaching interests are in visualization, computer graphics, and image processing.

Her previous professional life was spent with positions at the Center for Astrophysics and Space Astronomy at the University of Colorado (1987-1990), at Vexcel Corporation in Boulder (1985-1987), and at the institute for image processing and computer graphics at the research center Joanneum (1982-1985) in Graz, Austria. Below are some specific research interests of her research group:

One of her favorite interests is to pursue a systematic view of visualization curricula. Since 1992 she has been active in the ACM SIGGRAPH Education Committee to chair the subcommitte on "Education for Visualization". She is also Co-Editor of the Education Column in the IEEE Computer Graphics and Application Magazine. She is a member of IEEE (Computer Society), ACM (Siggraph und Siggchi), und GI.

Because of the complicated European laws she had to change her name from "Domik" to "Kienegger" in order to receive the birth certificate for her son Jakob. This explains the inconsistency of the writing of her name (it appears as "Kienegger-Domik" in some publications).

Beyond her "normal" duties at the University she enjoys to be liaison for exchange students in the department of Computer Science, active in the ACM SIGGRAPH Education Committee (providing resources for educators in the areas of "Visualization" and "Interdisciplinary Learning" in Graphics/Visualization), European Representative of the ACM SIGGRAPH Education Committee and IEEE Computer Graphics and Application, Member of Editorial Board.

More information on Domik on one of her home pages, from which much of the above was taken.